Stop And See The Light

Ajiveena, an NGO, is equipping the visually impaired with reflective vests to save their lives on roads 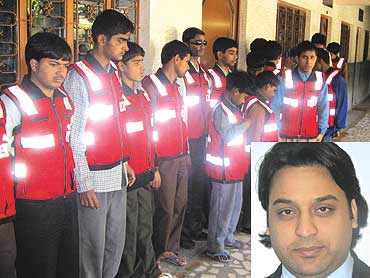 outlookindia.com
-0001-11-30T00:00:00+0553
Jogesh Sehedeva, who works with a Korean MNC, was speeding on the highway last November when a man suddenly crossed the road. Sehedeva managed to brake in time to prevent what would have been a fatal accident. But he was livid at the man who had crossed without looking. He even raised his voice. But then he realised that the man against whom he was venting his ire was visually impaired. The incident left a deep impression on Sehedeva. He felt guilty and didn’t know what to say. He recalls: "It left me with a life-long guilt and an urge to do something for the blind. My concern was that there shouldn’t be another person getting into the same situation that I had experienced."

Thus was born Ajiveena in January this year. It is an initiative towards equipping the visually impaired with clothing that will help save the wearer’s life on roads during low light condition. It is only a luminous vest but makes all the difference as drivers can spot the blind and slow down or stop if a visually impaired person is crossing the road. Before launching Ajiveena, Sehedeva conducted a survey among the blind in Delhi and found that most of them expressed their inability to move out of their homes after sundown. Fear of accidents kept them indoors. The consensus from the visually impaired was that luminous clothing that could identify them would help.

The vest had to be designed in such a manner that it would not only be comfortable but also be clearly visible in low light conditions. The material chosen for the vests was Glodian—a reflective material, which works on the principle of retro-reflective micro-prisms. It was found suitable as it is made of pvc which is flexible, light and washable. The colour chosen for the vest was red which shows up text and images. It is also the colour associated with danger. On the vest would be a triangular cautionary symbol.

As of now about 100 Ajiveena vests have been distributed in Delhi to the visually impaired. But with ActionAid promising it funds later this month the NGO hopes to step up its distribution of vests. These are provided free of cost and Ajiveena hopes to work with other NGOs to maximise its reach.

The initial response to the vests has been encouraging. Says Sehedeva: "The overall response has been quite favourable and encouraging. Friends along with other concerned bodies like NGOs and eye hospitals have appreciated the thought and the concern for the sector. It’s really been motivating throughout." Adds Sunil Kumar, the secretary of the National Blind Youth Association: "It a good move on the part of Ajiveena as these vests will help the visually impaired."

In the first phase, Ajiveena hopes to cover the 50,000 visually impaired in Delhi before moving on to other metros. With the central government showing interest in the project, Sehedeva’s target is to reach out to the blind across the country. But this would require help from various quarters. According to him, corporate and government bodies as well as NGOs should support the movement if it has to succeed.

Providing the visually impaired with Ajiveena vests is the first step. An awareness campaign also has to be launched simultaneously among the general public as well as those who drive vehicles. Ajiveena volunteers have begun spreading the message in schools and colleges. They have also sought the cooperation of the safety cell of the Delhi Police. The idea is to make people aware so that when they see a person wearing the vest they can identify him or her as a visually impaired person.