The party is crying foul in Jharkhand. But take a look at its own dismal record. 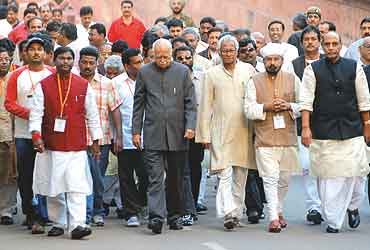 The moral high ground is what the BJP loves to get on. Currently, it is seething with righteous indignation, giving gratuitous advice to the Congress on misuse of the governor's power. Triumphant at having outdone Congress manoeuvres in Jharkhand, the BJP has now adopted a holier-than-thou posture.

This is quite a hypocritical stand for a party that flouts legislative decorum, and even criminal law, with devil-may-care impunity. Ayodhya and the Gujarat massacre are some of the more spectacular public crimes committed by the BJP. There is also the outrage of the 13-day Vajpayee government giving the go-ahead to the controversial Enron deal even as it was on the verge of being voted out of office.

But what is perhaps not so well chronicled is the fact that when the boot is on their foot, the BJP does not bat an eyelid before manipulating state legislatures. Indeed, a party that wants a review of the Constitution is often accused by its critics of having no respect for the document that lies at the heart of India's vibrant democracy.

formation in Jharkhand. For, in the six and a half years of BJP rule at the Centre and in the states the party has pulled every stunt, and crossed the line of political propriety several times, to hang on to power by hook or by crook. Here are some instances of blatant bending of the rules by the BJP: 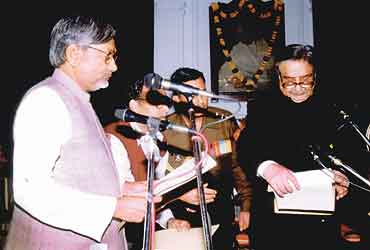 The Bihar Bungle, 2000: In a sense what happened in the Jharkhand Raj Bhawan in 2005 is a replica of the outrageous events that took place in Bihar after the 2000 assembly elections. The verdict in Bihar then, as now, was clearly hung. In a 324-member house, the RJD-led alliance emerged with 123 members. The NDA allies led by Nitish Kumar fell one short with 122. Yet the then governor Vinod Pande (appointed by the BJP) gave Nitish Kumar the first shot at government formation. With the NDA then in power in Delhi, Nitish was given every possible support to realise his chief ministerial dream. George Fernandes camped in Patna for days. The old Bihar elite, and even large sections of the media, openly advocated Nitish's cause. Veteran socialist leader P.K. Pandey, who was then a close aide of Nitish, now says: "L.K. Advani and George both telephoned governor Pande to push him into calling Nitish." Pande obliged.

Once sworn in as chief minister, Nitish and his managers like politicians Raghunath Jha and Lallan Singh went to Beur jail and located jailbirds who had been elected as independent MLAs. Many of them like Surajbhan Singh, Dhumal Singh and Rajan Tewary, "still technically in jail", attended a dinner party hosted by Nitish. They also made a visit to the assembly; they were escorted into the chief minister's chamber where they were photographed with a smiling Nitish.

Incidentally, although the Supreme Court recently forbade the short-lived Shibu Soren government from nominating an Anglo-Indian member, Nitish chose one such member to buttress his numbers. He also tried his utmost to get the support of other parties and independents. The BSP refused but the jmm (it was undivided Bihar then) obliged. Yet Nitish could only muster 153 MLAs when the simple majority required 163. He resigned without facing a floor test.

Eventually, Laloo Prasad Yadav had the last laugh.Pande had no choice but to ask him to form a government and Laloo was able to shore up the requisite numbers with considerable ease. Vinod Pande's distinguished career was marred by this episode.

Kesrinath Tripathi has arguably been the most notorious speaker of contemporary India. The unforgettable and degrading scenes of MLAs attacking each other, throwing slippers, snatching mikes, with some of them even landing in hospital, took place while Tripathi was presiding over the Uttar Pradesh assembly. In 1997, he had one purpose: not to uphold the Constitution and the dignity of the legislature but to ensure the survival of the BJP government led by Kalyan Singh. So when Mayawati's BSP withdrew support, Tripathi came into action. The BSP had 67 MLAs in the House, so under the anti-defection law of that time, it required one-third or 23 MLAs for a formal split. Yet Tripathi recognised the split of just 17 MLAs who then came to be known as the Jantantrik BSP.

He also came up with a rather incredible explanation. Tripathi claimed that 23 BSP MLAs had met him earlier expressing a desire to split. "But then there was a misunderstanding and only 17 wanted to split." His arithmetic got quite convoluted when he said "17 out of 23 is more than the required number." Though Mayawati understandably yelled in protest, no court came to her aid as it did in Jharkhand. Incidentally, all the 17 defectors were rewarded with ministries in the BJP government. It was Tripathi's actions that provoked those disgraceful scene in the Vidhan Sabha.

But some years later there was further outrage from Tripathi. When Mulayam Singh Yadav became CM in 2004, 40 of the BSP's 106 MLAs backed him. Tripathi ruled that they were within their rights to do so. But now the matter has gone to a high court bench as in the meantime the anti-defection law had been changed and now it required two-thirds of legislators to bring about a legal split. Indeed, if the high court rules that this split was illegal, Mulayam's government in Uttar Pradesh could fall.

The Comatose Speaker of Gujarat, 1996: In 1996, when Keshubhai Patel was BJP chief minister of Gujarat and Shankersinh Vaghela's rebellion was at its peak, eventually leading to the latter's departure, there was a speaker of the Gujarat assembly who managed to rake up a controversy, well, even in deep sleep. The problem was that the old man, Harishchandra Patel, was seriously ill—what in medical parlance would be termed comatose. Yet the BJP was determined to have a show of strength in the assembly and prove that Keshubhai was, indeed, the man in charge. Interestingly in those days, the present torch-bearer of Hindutva, Narendra Modi, was Keshubhai's main advisor and strategist. (Modi's becoming CM has however led to a complete falling out between the two now).

So the BJP came up with a novel tactic. Orders signed by speaker Harishchandra Rai were produced. By these orders, the assembly was convened and a date given for a trial of strength. Yet the million rupee question was: could a man in a coma sign orders? There was something of a scam brewing when it was alleged that the speaker's son was forging his father's signatures. The scandal blew over in a few days but the son was rewarded handsomely. He was given a BJP ticket to stand from the Gandhinagar seat. This is actually L.K. Advani's Lok Sabha constituency but Advani did not stand in 1996 because of the hawala charges against him.

The Manipur Mess, 2001: This is arguably one of the most complicated outrages committed by the BJP. In this case, BJP MLAs acted against a government led by their ally, the Samata Party (now JD(U)). In the 60-member Manipur assembly elected in 2000, the single largest party was the Manipur State Congress Party with 23 MLAs.But in less than a year they were supplanted by the Samata Party whose leader Radhabinod Koijam weaned away 11 of the 12 Congress MLAs. Simultaneously, the MSCP split and 20 MLAs joined the BJP. They now wanted to pull down the Samata.

This splitting and joining into smaller and bigger pieces was so confusing that eventually governor Ved Marwah had little choice but to bring Manipur under President's rule. Yet the Manipur episode provided an instructive lesson on how the BJP and its allies can transform, or even metamorphosise, small parties into themselves. All of this requires central influence, and lots of cash which smoothens the path of persuasion.

Arunachal Audacity, 2003: This is a remarkable saga of how the Congress was, with a flick of a magic 'wand', transformed into the BJP. Naturally, such a transformation was only possible because the BJP-led NDA was in power at the Centre.

All the drama and the high jinks in Arunachal Pradesh took place in the summer of 2003. Briefly, the facts are as follows: The Congress government in Arunachal Pradesh was reduced to a minority after 31 of its 58 MLAs formed a separate party and elected Gegong Apang their leader. Apang became CM in the 60-member house. Then a month later Apang joined the BJP—although the process is better described as a "transformation". Overnight, a BJP government came into existence in the remote state. Then the NDA lost the general elections. So, on August 28, 2004, Apang again changed his colours and became an honourable member of the Congress. All his MLAs naturally followed. It's quite a remarkable flip-flop, one that first led to the creation and then extinction of the BJP in Arunachal Pradesh.

Clearly, the BJP has few scruples when it comes to grabbing or hanging on to power—whether constitutional or not. That is why, even after the Jharkhand fiasco, however shameful it may have been in a democracy, it can hardly claim moral superiority. It is a case of a sooty pot calling the kettle black.