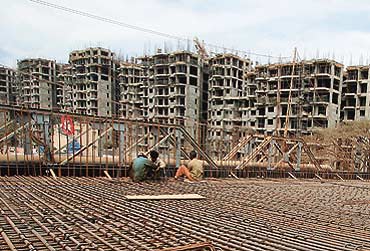 "Bangalore is the haven for land mafia, real estate sharks and land encroachers.... The city corporation, the city development authority, the city municipal councils and other government agencies have failed in their duty...officials have also become active participants, abettors and promoters of these crimes."
—Interim report of the joint legislature committee on land encroachment in Bangalore urban and rural districts, submitted to the Karnataka Speaker

In Bangalore's political circles, there was always talk of "the great land grab" happening in the Garden City. But the shocking facts that came to light in the interim report of the Joint Legislature Committee (JLC)—set up to look into encroachments facilitated by Karnataka politicians—surprised everyone. The committee, which partially surveyed the city and its suburbs, found that nearly 13,000 acres of public land, worth upwards of Rs 15,000 crore, had been encroached upon. And that's hardly the whole story—nearly 85,000 acres of government land still needs to be surveyed. Notes the JLC report: "At present, 36 surveyors are at work and 247 more surveyors are required to complete the work in two months." The final picture is sure to be a mind-boggling one, showing the true extent of the scam involving big business as well as politicians.

The JLC, headed by A.T. Ramaswamy of the ruling JD(S), was constituted in June '06 and has 14 MLAs and six MLCs from across the political spectrum. Among other things, the panel's mandate was to identify land-grabbers; publish details of encroached land; identify errant officials; look into action taken by law-enforcing agencies and also recommend legislative measures to prevent land-grabbing in the future.

For now, the panel has not revealed any names but an inside source says that a complete list of names with survey numbers would be offered with the final report. The source also says a secretary to the government, while appearing before the panel, had stated that there was "a list of 300 VIP encroachers with the government". An official request for the list has been forwarded, but the panel has not received it so far.

The JLC report, besides identifying many new apartment blocks and the numerous Bangalore Development Authority (BDA)-approved layouts on encroached land, also says that a two-and-a-half-acre plot in the heart of the city belonging to the National Institute of Mental Health and Neurological Sciences (NIMHANS) and a few hectares of land from the Banerghatta National Park have also been grabbed by powerful lobbies. In a shocking revelation, the report notes: "In Jala Hobli of Bangalore North taluk (formerly in Devanahalli taluk) a large number of revenue records have been deliberately destroyed when the district was bifurcated into rural and urban districts in 1985 and later when the Bangalore International Airport project was announced."

Speaking of the absolute anarchy vis-a-vis BDA layout violations, the report says that sites for civic amenities like parks, roads and other public places—amounting to about 50 per cent of total layout area—have not been relinquished to the BDA but have also been distributed as housing sites. In some cases, the layouts have not even been approved by the BDA, says the report, adding that "in these illegally distributed sites, the Bangalore Mahanagar Palike or corporation (BMP) has been going on merrily giving building licences with impunity to whoever is asking for building plan approvals". The panel says it has seen "over-writings, obvious bogus entries, illegible and unreadable writings of BMP officials and casual approval by senior officers...BDA and BMP have become silent spectators and worse, active facilitators and promoters of land-grabbing."

Housing societies have not come out smelling of roses either. In a case cited in the report, a president of a society went to the extent of claiming that members had been charged Rs 20 per square feet extra so that a total amount of Rs 4.5 crore could be paid as bribes to officials and non-officials. Apartment builders have also been charged with encroaching on tank bed lands. On forest land encroachments, the report says: "In most cases, issue of notice has become a substitute for taking action and often a convenient ruse to enable encroachers to go to the courts and get stay orders which continue for years with the forest department sleeping over it...."

Such strong reprimands, of course, means the political fallout has just begun. Although the final report is expected to affect politicians across party lines, the Opposition Congress has been first to press the panic button. At one stage, the party had planned to replace some sitting members but now has decided to withdraw all its members on the panel.

But one member, former Congress minister Roshan Baig, has put up some resistance and insists he wants to stay on. Baig says: "I was hurt when the Opposition leader asked me to walk out of the panel meeting convened to finalise the draft of the interim report. I insist the final report should be given to the CBI for a thorough probe." Speaking to Outlook, Dharam Singh, the man in question, countered the charge: "To withdraw members was a collective decision of the party. The speaker failed in his duty to consult me when he constituted the committee, which is a violation of rules and procedure." The Congress, though, seems to have woken up to the violation in procedure a tad too late. Baig insists that he had "already attended six meetings when my party decided to boycott the panel". The Congress is even planning a no-confidence motion against the speaker on this issue. And the fact remains that it's not just one party that is involved. Across the political spectrum and over the years politicians have played a key role in helping encroachers.

Even as a political storm gathers around the report, the real casualty seems to be Bangalore itself. Points out former additional chief secretary and development commissioner Chiranjivi Singh: "This whole business of encroachments cuts at the heart of rule of law. This kind of land-grabbing is taking place all over the state, from Bidar to Bangalore. Since the 1970s, successive state governments have regularised encroachments...the rich seem to have gained more than the poor out of this. Also, this has encouraged people to grab land without fear. No government should close its eyes to this problem which afflicts the state. There is lawlessness all over as far as encroachments are concerned." But finally, payback time seems nigh.

The Law In Stone