A worthy premise, but a tad unrealistic in the grim realities of the present 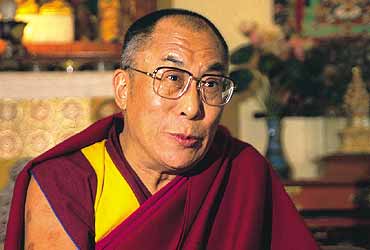 Destructive Emotions And How We Can Overcome Them: A Dialogue With The Dalai Lama
By Daniel Goleman
Bloomsbury Price: £4.99; Pages: 404
There is a significant body of literature that explores the very wide range of scientific, as well as a great deal of pseudo-scientific, evidence on the beneficial impact of various patterns of meditative practices on the general well-being of practitioners, as also on specific emotional responses, skills and abilities. As medical technologies advance, the spectrum of bio-feedback studies has been continuously extended, with more and more sophisticated instrumentation applied to monitor and document the impact of meditation and other ‘spiritual’ methods on specific variables, including immensely complex patterns of neurological activity. The general consensus is that vast powers of the mind in man remain entirely untapped and that the potential for human transformation in the hidden interstices of the brain is extraordinary, if not—as much of traditional religious literature, particularly Indian, may suggest—limitless.

In March 2000, a group of scientists and academics, including psychologists, psychiatrists, neuroscientists, a philosopher, religious scholars and a number of scholarly Tibetan Buddhist monks, entered a week-long ‘dialogue’ with the Dalai Lama at Dharamsala, exploring the possibilities of a "collaboration between science and spirit" to determine whether people can train their minds to overcome the "destructive emotions" that underlie the rising violence of our age. The larger purpose was to apply new research in experimental psychology and the neurosciences to the monk’s thesis that a secular ethic that incorporated methods for training the mind could be evolved for the benefit of all humanity and not just of particular sets of religious practitioners and could help counter what Buddhists call the Three Poisons: hatred, craving, delusion.

Destructive Emotions is a record of this ‘dialogue’, and includes an account of the various presentations, discussions and interactions. It suffers as a result of its format, and, as a record of discussions and protracted narratives, mixed in with formal presentations, it is tedious and far from inspiring reading. But there are flashes of relief and anecdotes or experimental results that will interest and excite those who incline towards meditation and practical spirituality. There are also very significant issues the discussants engage in, including the crucial influence of culture on the patterns of dominant emotions within a given population, where conventional wisdom and the prevailing (western) ethic and ideology are questioned and the possibilities of alternative worlds is explored, strongly underlining the fact that what we do, the world we live in and the very ‘nature of man’ result from our own choices far more than the major streams of modern thought are willing to recognise. Compassion and emotional stability, it is emphasised, are acquired attributes that can and should be encouraged culturally and through active schooling. Some of the strongest arguments for this approach come from the evidence the book compiles from neuroscience experiments that demonstrate the ‘plasticity’ of the brain and the susceptibility of our emotional responses to alternative training regimes and systems of education.

Nevertheless, the book suffers from the fact that its author and other participants evidently ascribe an iconic status to the Dalai Lama and greet some of his very pedestrian observations with hushed admiration. There are, however, more fundamental difficulties which go into the deeper root of the Buddhist view of life and its emphasis on personal spirituality and liberation (moksha). While this perspective cannot be faulted from a personal, subjective point of view and while it would be reasonable to concede that a fairly affluent and stable society could engineer some of the cultural transformations envisaged in the book, it is far from a demonstrable case that these transformations can be secured in the contemporary, fractious and highly inequitable world order where there is far too much structural violence even to secure the necessary consensus that must precede any such experiments in mass social engineering. Regrettably, meditation and spirituality will remain, in the foreseeable future, means to personal emancipation, growth and ‘emotional management’ for a small minority of people in a world of overwhelming violence, where organised religions, by and large, feed the fire to a far greater extent than they douse it.

Nevertheless, for those who mix an interest in the unrealised potential of the mind and of the human race with an admiration for the Dalai Lama, this is a book that will yield at least a few hours of rewarding reading.

An Act Of Bad Faith?