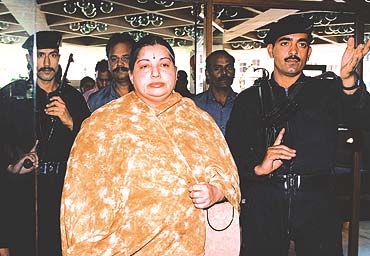 Z: Same as Z plus, only one escort car

Everyone agrees that our VVIPs and VIPs enjoy extremely elaborate security cover. But do they really need it? The Delhi High Court's recent observation, while hearing a PIL on the deteriorating law and order situation in the national capital, is revealing. The court commented on VVIP security: "We cannot appreciate this. You have made a mockery of the threat perception." This sharp reaction came after the HC was informed by the home ministry that for the 391 VVIPs and VIPs who enjoy "the privilege", 9,000 police personnel were required round-the-clock.

Now the high court had focused only on Delhi. National figures reveal that some 2,300 people are currently provided special security. This when Intelligence Bureau (IB) and home ministry officials themselves admit that only 25 per cent of our VIPs deserve special cover. As an IB official put it, "Of the VIPs enjoying various categories of security, not even 500 actually need it. It all boils down to political equations. Instead of pruning the list and right-sizing it, more and more people are being added to it every year."

The IB reviews "threat assessments" annually and recommends whether security must be enhanced, scaled down or withdrawn. It also vets the applications of those who have sought cover. Last week, the agency submitted its recommendations to the home ministry. If the ministry acts on the IB assessment, then the security cover of many prominent politicians will have to be downgraded. These include ex-Tamil Nadu chief minister J. Jayalalitha, rail minister Laloo Prasad Yadav, HRD minister Arjun Singh, DMK leader M.K. Stalin, Punjab CM Parkash Singh Badal, BJP president Rajnath Singh, former Union ministers Jagdish Tytler and Murli Manohar Joshi as well as VHP chief Ashok Singhal.

Also on the list is ex-Uttar Pradesh CM Mulayam Singh Yadav. But that's more an internecine battle. His successor and bete noire Mayawati believes he does not need the kind of security he's been provided. She has asked the home ministry to withdraw his Z plus security cover, or at least to downscale it. Incidentally, she herself is provided security cover under the Z plus category. Among all this, few are likely to take heed of the IB's view on the matter: it says neither Mulayam Singh nor Mayawati needs the level of security they have been provided.

Officials of the ministry of home affairs (MHA) admit that in a large number of cases the security threat is overplayed, particularly in cases where security is downgraded or going to be downgraded. They cite the example of beauty therapist Shahnaaz Hussain who was provided security cover in December 2005. It was withdrawn after four months. She has now requested that the cover be restored since she's been receiving threatening letters for being married to a Hindu and promoting Ayurvedic cosmetics.

It's been an old crib, but it's a fact that for many VIPs security and the paraphernalia that comes with it is more of a status symbol than a necessity. The home ministry, in fact, admitted as much in its reply to the Delhi High Court: "In public perception, VIP security has tended to connote a picture more of a VIP than security. Often protectees were themselves found to entertain such perception and demand special privileges."

However, with the number of people seeking and getting security going up, the pressure on the police is also increasing. In Delhi alone, of the 60,000 police force, 7,000 are permanently on VIP duty. The other 2,000 personnel needed are drawn from the central paramilitary forces like the CRPF, ITBP and CISF. Commandos of the Anti-Terror Force, National Security Guards have also been deployed to protect many VIPs in the Z plus category.

Home ministry estimates suggest that nearly 18,000 personnel are on VIP cover duty nationwide. It's come to such a pass that the central forces have started complaining about the drain on manpower. The home ministry, meanwhile, is now at work on creating a specialised force under the CISF just to handle VIP security. And in the case of private individuals, it is also contemplating charging them for providing security cover. A home ministry committee under former additional secretary P.V. Bhide had looked into VVIP and VIP security and its report to Union home minister Shivraj Patil has made these suggestions.

As for the IB assessment, the final word rests with the home ministry. "It could take a few weeks to decide on which VIP will move around with how many armed guards, if at all. But going by past experience, no major changes are expected," says a senior home ministry official. This despite existing guidelines that the threat to a person "should predominantly come from militants, terrorists or organised criminal mafia". Guidelines relating to VIP security were outlined in the New Policy on Security of Individuals in 2000, but they are rarely adhered to.

One guideline that's often ignored relates to those who have occupied sensitive positions in the past. "No security will henceforth be provided merely on the ground that the person concerned has occupied a sensitive position in the past. In all cases where purely positional security has been provided to an individual, the same shall be withdrawn on demission of the concerned office by him." This is overlooked most of the time on grounds of the much-touted "continued threat".

Meanwhile, as our VVIPs lord it out, the cost is telling on the exchequer. While the home ministry does not provide a nationwide figure, the budget runs into several thousands of crores. At a time when many ministries and even the MHA are hamstrung for lack of funds on crucial projects, can there be a better argument for curtailing of these "special benefits"?