Time touches a city after its own manner, often unaiding memory. Still, I remain a Chennai boy. 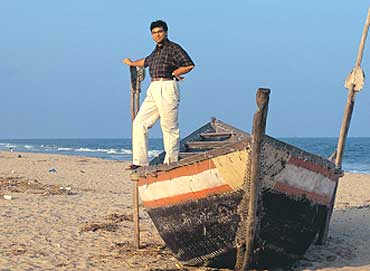 outlookindia.com
-0001-11-30T00:00:00+0553
My life is a tale of three cities—two in which I’ve lived most of my life, and the third where chess became a passion for me. My earliest memories of Chennai, my birthplace, are of our house in Perambur. Later we moved to Nungambakkam and stayed there for some 10 years. My father worked with the Railways, and we always lived in railway colonies.

I vividly remember my first day at school—Don Bosco in Chennai. When I was a bit older I used to cycle to school, which was around 4 km away. Chennai was a much quieter city then. There was much less traffic. Nungambakkam is centrally located and I remember riding all over the city—to visit my grandmother and an aunt.

From late 1978 to early 1980, we moved to Manila, where my father had an assignment. We lived in Tropicana Apartments, on the second floor. In the afternoons I would watch chess on TV, and that’s when I first developed a passion for it. I remember the strange vehicles they had in Manila for public transport—they’re called Jeepneys and I used to find them very funny, very distinctive, just like our own autorickshaws, which you don’t see anywhere else. 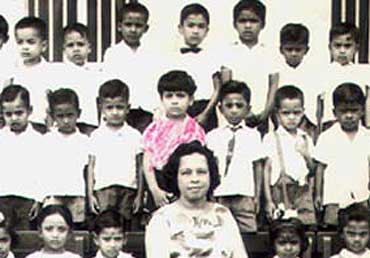 Anand (in pink-coloured shirt) with classmates in Don Bosco Chennai, 1974

I remember travelling to Baguio, a hill station. Philippines, of course, has wonderful beaches as well, and volcanoes.

When we returned to Chennai from Manila, I had a two-month break before rejoining Don Bosco, and I found it hard to get used to the school routine again.

My friends and I used to generally hang out around Sterling Road. We used to go around all of Nungambakkam, up Gemini Flyover and beyond. We’d go to the Woodlands Hotel, and some of the theatres on Mount Road. A lot of Don Bosco boys lived in Nungambakkam, and we’d visit each other’s houses. At other times, we’d go to the beach or the beach resorts in Mahabalipuram. We used to visit Mylapore too, where my cousins lived, and we’d go to the Kapaleeshwarar temple there once in a while. The Railway Club was on Sterling Road, and I’d go there often. The Music Academy was also close by and I remember going to classical music concerts. That helped develop my taste, a bit, for classical music. Now when I come back to Chennai, I try to catch some concerts at the music season in December. And then there’s south Indian food, which I love! 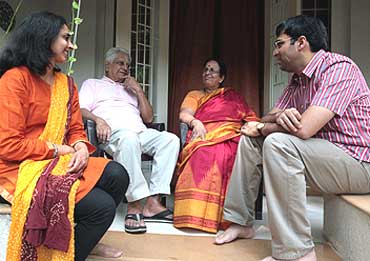 Resident great: Anand with his wife (left) and parents at his house in Chennai

Several of my old friends still stay in Chennai; and last year we had our class reunion and dinner. We exchanged stories from the days gone by, and it was lovely. I still go back to some of the old haunts but a lot of these places no longer exist! Or it’s difficult to recognise them—you can’t pick out the landmarks. They, and their environs, have all changed so much because of the flyovers. Sterling Road too has changed much.

When we moved to Besant Nagar in 1986 after my father retired, it was a very quiet part of the town, almost at the very edge of the city. Now Chennai has extended 20-30 km beyond it.

Change is natural, of course. No one really likes the traffic, but I think Chennai has become a lot more interesting, more vibrant, more exciting. They’ve removed the hoardings, and that’s a great improvement. I don’t live in the past, but it was a very pleasant city to grow up in. A very relaxed city.

Change has come to Collado Mediano too. I chose this small town on the outskirts of Madrid as my base in Europe as I had friends there. When I started living there, it was basically a small village. Now it’s doubled in size, which still isn’t saying much! But at least now we have supermarkets there, so we don’t need to go to Madrid for every little thing.

It’s a shock when you move into a town of 4,000 people from a metropolis like Chennai!

It was difficult to adapt, and I grew into it gradually. It’s as different from Chennai as can be—Collado Mediano is in the mountains and the weather is lovely. Not many cars, I find it very peaceful, I do things I can’t do in Chennai any more, like cycling, which I love. I also do mountain biking, stuff that you can’t do in a city. The town has been very nice to us, but you do miss the convenience of the city.

Though I went back to Philippines several times after we left, I haven’t been there since 1992. For the most part, I’ve lived in Europe and India, and I carry a bit of both when I travel. Principally, I’m Indian, a Chennaiite, but I’ve now spent so many years in Spain, and know the language. When I’m in Spain, I miss India, and when I’m in India, I miss Spain!

Indians are very special, very warm, as are people in Spain. The big difference is that there just isn’t the crush of people we have here in India. There are negatives and positives in both places.

But despite travelling all over the world in the past many years, and despite now being based in Spain, I remain a Chennai boy in every sense.

As told to Rohit Mahajan