A new promiscuousness swamps our screens as Bollywood goes on testosterone mode. A sign of our evolved times, or is it just to get cash registers ringing? 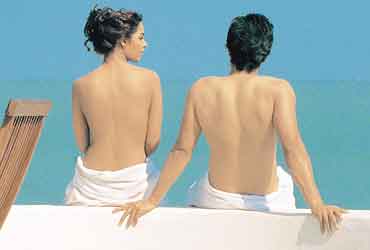 outlookindia.com
-0001-11-30T00:00:00+0553
A cavernous belly button moves up and down. Rapidly, as if motorised. The camera closes in on the Barbie doll-like body, as the man in the frame goes south: oral sex is a little more than hinted at. As for the heroine, well, her face shows she's having a good orgasm day. Additional gasp factor in this scene from Murder, the latest from the Mahesh Bhatt stable: the heroine (Mallika Sherawat) is married and the man making passionate love to her (Emraan Hashmi) is not her husband. Murder is just the latest in the rash of films hovering around the adultery theme in the last few months: Hawas, Masti, Jism, Tum were some others and there are a lot more in the pipeline. Coming up: Boney Kapoor's Bewafaa in which Kareena Kapoor continues to see ex-lover Akshay Kumar even after her marriage, and Sanjay Gupta's Musafir, which has Sameera Reddy striding across the laxmanrekha of fidelity, repeatedly.

It's raining adultery in tinsel town. The age of screen innocence (rather, sex-by-proxy when birds, bees and flowers and fountains-that-suddenly-come-on had you flummoxed) has yielded to more sexually explicit cinema. Directors now take subjects like infidelity and premarital sex head on. They are even beginning to explore same-sex love. Ramesh Sippy only flirted with homosexuality in sly references to a gay jailbird in Sholay in 1975. Since then, gay men have mostly been popping up as funny sidekicks in mainstream cinema. However, coming to a cinema near you soon is Karan Razdan's Girlfriend, in which Isha Koppikar is in love with Amrita Rao who is in love with a man. Gay love is also something of a tease in a mainstream film like Kal Ho Naa Ho: the bonhomie between Shahrukh and Saif Ali Khan is repeatedly misunderstood by the latter's near-hysterical maid to be a homosexual dalliance.

It seems Indian cinema has dropped most of the fig leaf. Raunchy music videos have lowered the bar on near-pornographic gyrations on the big screen. Men join women as lust objects: the camera now caresses pumped-up bodies of shirtless heroes, some of whom barely fit into their almost bikini-size bathing trunks. For both sexes, it's both strip and tease.

To begin with, you have willing stars. Younger actresses now readily grin and bare it—whether it's Bipasha Basu or Mallika Sherawat, Meghna Naidu or Sameera Reddy or the burgeoning number of starlings waiting in the wings. As do the ladies of the ramp and beauty queens like Priyanka Chopra, Neha Dupia. 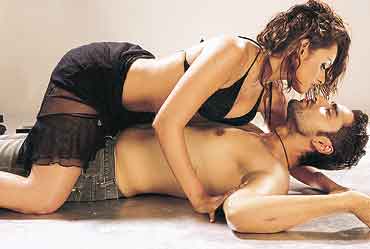 Then you have the film-by-numbers stories. Adrian Lyne's movies are the current favourite blueprint. Unfaithful is the "inspiration" for several adultery yarns. Lyne's Fatal Attraction and Indecent Proposal also provided pret-a-porter scenarios for films dealing with sexual obsession and renting out wives. And don't forget Lawrence Kasdan's Body Heat (woman picks up lover to kill husband), which has spawned more than one Hindi version.

But are these films really adult? Take the adultery-themed films: they come with a statutory warning. Even in the more sizzling Murder, the adulteress has a justifiable reason for straying, and in the end morality will triumph. Her husband neglects her because he still loves his wife who died in a plane crash. Herein lies the rub: the protagonist had given her sister the ticket, and racked by guilt, she now looks after the sister's son too.Lyne's women, in contrast, are in it for the pleasure, however momentary.

Adultery is nothing new in Indian cinema. It's just that the camera till now never followed lovers into bedrooms and bathrooms. And if it did, the lights blinked off at the crucial moment. In Pati Patni Aur Woh, a glimpse of Sanjeev Kumar's heaving chest told you what he was up to. Hrishikesh Mukherjee explored the subject with great sensitivity in Anuradha with Balraj Sahni and Leela Naidu in 1960. Three years later, again with Naidu, Sunil Dutt produced and acted in Yeh Raaste Hain Pyar Ke, based on the Nanavati murder case: army officer shoots his wife's lover.

Initially, wives who stepped over the laxmanrekha or the "other woman" who stepped into somebody else's territory, had to die at the end. In a later era, it moved to life goes on, occasionally with rare solutions. In Kalpana Lajmi's Ek Pal (1986), Shabana Azmi, a busy planter's wife, decides to keep the love-child she's had with an old flame. Among the more memorable films of recent times with adultery as a theme are Mahesh Manjrekar's sensitive Astitva, Yash Chopra's Silsila and Aparna Sen's accomplished Paroma. 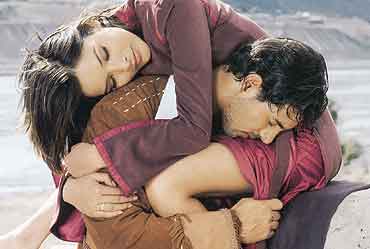 Certainly, films are more sexually explicit today. But are they more sensual? In Paroma, Rakhee—playing a middle class Bengali housewife who has an affair with a photographer—puts more sensuality into the act of eating a green chilli than many films being made today. In