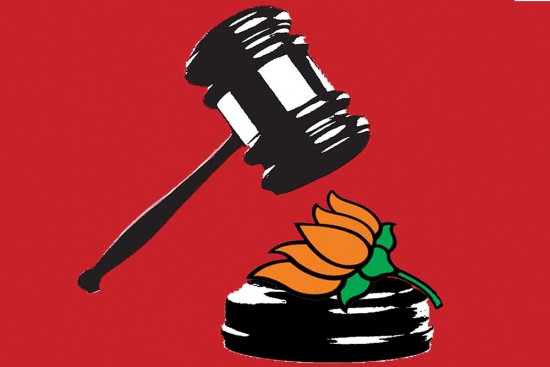 It takes skills of an Olympian order to talk of “cooperative federalism” on the one hand and find ways of getting rid of pesky governments on the other—and still strut around self-righteously as if you can do no wrong. After the whiplash it has received from the Supreme Court, first in the case of Uttarakhand and now Arunachal Pradesh, it’s hopefully not anti-national to suggest that this honour sits well on the Modi government. The two states are in no way related but twice in the last two months, a majority government has had the ignominy of being rudely told  that constitutional propriety should guide the executive, not political expediency. Rahul Gandhi’s expression of gratitude to the SC for “explaining to the prime minister what dem­ocracy is” might look gratuitous, even desperate, considering his party’s record in similar misadventures and its present plight, but insofar as reminding the BJP of its moorings, the judgement comes not a day too soon.

Doubtless, @swamy39 will soon intimate @narendramodi what he needs to do with his top law officers who seem blessed with the un-Midas touch, but the larger message that emerges from this double “dhamaka”, as it were, goes beyond 140 characters. It is the urgent need for Modi Sarkar to change its attitude with the states, talk the right language and back it up with actions that are in sync with its advertised objectives. In short, it should stop acting out of spite, vengeance or condescension. The acrimony that has marked its relations with the democratically elected Delhi government, for instance, brings no credit to a man who once headed a state, albeit a much larger one. The statements made by his colleagues in the run-up to the elections in five states, even more so. Respecting the mandate of the people even if it is not to your liking, especially if it is not to your liking, is a prerequisite in democracy—and staying roo­ted to the ideals from which emerged this Republic is paramount as Jammu & Kashmir threatens to slip out of control. “Congress-mukt Bharat” cannot be an objective which the BJP seeks to achieve by hook or by crook to the applause of the trolls.