Yeh dil maange no more; Lights on the runway; The huff and buff of protest; Discipline and vanish; Hostage to revolution; Queen Mary, she's not my friend 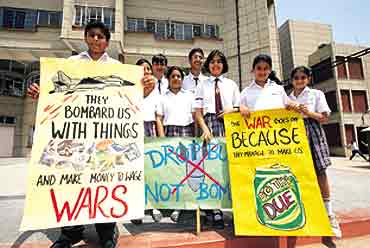 DELHI
Yeh Dil Maange No More
One fallout of the Iraq war has been the widespread boycott of products manufactured by American and British multinational corporations (MNCs). From Thiruvananthapuram to New Delhi, reports say the anti-war campaign is impacting sales. And bearing the brunt of the boycott is Coke and Pepsi.

In Kerala, traders report that the sale of Coke and Pepsi has come down sharply ever since the invasion of Iraq. The Anti-War Forum, which is spearheading the campaign, has announced that it will make Kerala a "Coke and Pepsi free zone" by April 13. Already, there has been a 60 per cent drop in the sales of Coke and Pepsi. Predictably, the two cola majors are deeply concerned. With filmstars leading anti-war rallies and holding fundraisers for the war victims, the anti-MNC campaign has gathered much steam. In Calcutta, Delhi, Mumbai and Hyderabad, several peace coalitions and Left groups have called for a boycott of Coke and Pepsi.