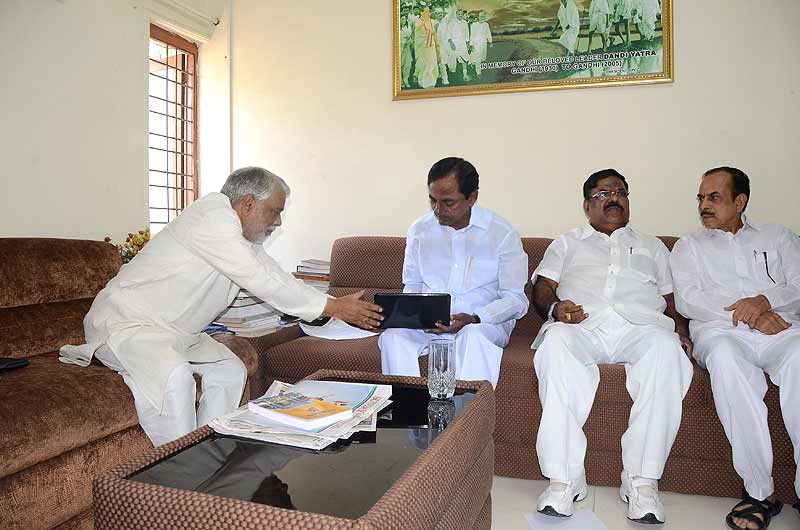 For some time now, with the statehood issue in a stalemate, Telangana Rashtra Samiti president K. Chandrasekhara Rao had confined himself to his farmhouse in Medak district on the outskirts of Hyd­erabad. Every now and then, he’d emerge from his den to address a press meet where he’d give the Congress and Telugu Desam a typical KCR tongue-lashing.

But things are changing. The TRS office in Hyderabad’s Jubilee Hills is again bustling with activity. In a successful act of backdoor diplomacy, KCR has managed to rope in some Telangana Congress MPs and TDP MLAs to his side. What’s more, they are talking about him in more glowing terms than his own party MLAs.

Manda Jagannadham, Congress MP from Nagarkurnool in Mahaboobnagar, was the first to be wooed. “Yes, we did chit-chat a bit,” Jagannadham tells Outl­ook about his KCR meeting. “The offer has been there for a long time. We’ve been trying hard to get the Congress to implement its promise on statehood so that it can survive in Telangana. We have to go back to the people and it is no secret that the Telangana people’s movement is a TRS patent now,” says the MP.

“We have to go back to the people and it is no secret that the Telangana movement has become a TRS patent now.”

CM Kiran Kumar Reddy’s uneasy equ­a­tion with his Telangana MPs is also at the root of it all (so much so, most of them give the CM’s public meetings a wide berth). Asked about the growing distance, Jagannadham says, “We haven’t distanced ourselves, it’s the CM who has forced this upon us. He gets us arrested at protests, cancels development work in our constituencies, makes us go to him with a begging bowl. What are we to do?”

“My workers and I have come to the belief that the Congress will not concede Telangana,” says Jagannadham. Rumour is rife that other Congress MPs from the region like G. Vivekanand, S. Rajaiah, Gutta S. Reddy and Ponnam Prabhakar will also jump ship soon. The YSR Cong­ress is also trying to ensnare them but the party is yet to gain momentum here.

Telugu Desam MLAs in the bag appare­ntly include stalwarts like Gangula Kam­alakar, Suddala Devaiah and Mahendra Reddy. One Congress MP from Telangana is already sounding the party’s death knell, “The Congress’s fate in Andhra is going to be like that in UP and Bihar. It will never be able to regain power.”

What makes TRS attractive are the rec­ent surveys showing the party getting 10-12 LS seats and over 70 assembly seats in the event of a snap election. “We are heading for much better days than in the last 12 years. Everybody knows now the UPA cannot or will not concede Tel­angana. So it’s natural that these leaders are attracted to the TRS,” says K.T. Rama Rao, TRS MLA and KCR’s son. “Whoever forms the next government at the Centre, be it the NDA or UPA, they will be forced to give us Telangana. In fact, the NDA has promised it in 100 days if voted to power. In that case, we are even looking at for­m­ing a state government in 2014,” he adds.

If ‘Operation Akarsh’ (as it’s known in TRS circles) has gained momentum, Kiran Kumar has added to his own tro­u­b­les by allotting iron ore from the Bayy­aram mines of Khammam district to the Visakhapatnam Steel Plant (VSP). He also gave the nod to mine iron ore in Kha­m­mam, Warangal and Karimnagar, all in Telangana. KCR calls it “another Andhra conspiracy” and an agitation is set for May with the catchline, ‘Bayyaram ukku, Telangana hakku (Bayyaram steel is Tel­angana’s right)’. Rama Rao has dared the state to lift even a fistful of mud from the mines declaring “barely five per cent of staffers in VSP are from Telangana”. He’s demanding that a steel plant be set up in Khammam. Looks like the agitation sea­son is cranking up for the TRS again.

All The Unused Betel Nuts