They hit the bottle; Tilting at the windmills; Bold symbolism; The flakes of pain; To strike supersonic friendships 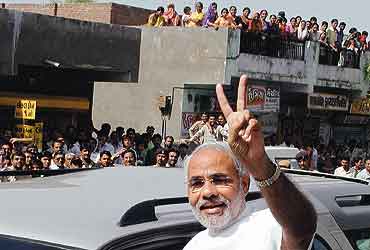 outlookindia.com
-0001-11-30T00:00:00+0553
BANGALORE, KARNATAKA
Scorched-Earth General
The BJP in Karnataka flew in its "ultimate campaigner" Narendra Modi for the second and final phase of polls. There was nothing new in what he said: it was his usual Hindutva rhetoric punctuated with digs at Sonia Gandhi. The campaign route that he took, however, has generated a lot of interest. Modi began his tour from Maddur in Mandya district, the constituency that S.M. Krishna represented as chief minister, but has shifted out of during the current polls.

From Maddur it was Mysore—former maharaja Srikanta Datta Wodeyar is contesting the seat on a Congress ticket. He was once a BJP MP. Then it was Madikeri, a district that has frequently raised the cry for a separate Coorg state. But the most important stop of the day, on Wednesday, was Chikmagalur, a district the BJP once thought could be its entry point into Karnataka. The Bababudangiri Sufi shrine, where the Sangh parivar wants to establish the Datta Peetha, is located here. From Chikmagalur it was Teerthahalli in Shimoga. The first day’s tour culminated in Udupi, the home of the Pejawar seer, who has had a quasi-active role in the Ayodhya row, and also the workplace of 13th century saint, Madhavacharya, now being appropriated by the rightwingers.

In the end, it’s for the secularists to read a pattern in Modi’s itinerary: "He did travel a communal route with his Savarkar-image and he had to attack Krishna, because the CM is the BJP’s real hurdle," says G.K. Govinda Rao, member of a non-political forum. The bjp state unit wants another Modi run.