Package deal; Terror bidda; Kingdom comes; All for the proletarian; The palace of slippery floors 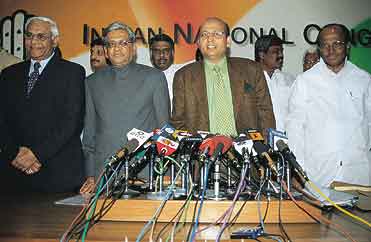 outlookindia.com
-0001-11-30T00:00:00+0553
DELHI
Prodigals In The Pocket
There was good news for the Congress all this week as it set out to broaden its regional base in two western states. In Karnataka, its fortunes got a boost when 16 senior leaders—including two former MPs and 11 MLAs belonging to All India Progressive Janata Dal (AIPJD) founded by the late Ramakrishna Hegde and now led by S.R. Bommai—joined the Congress. They are all Hegde’s men and were on the crossroads after his death last month. This decision to shed their late leader’s anti-Congressism is a shot in the arm for Krishna’s attempts to build bridges with the powerful Lingayat community. This could bolster Congress prospects in the northern parts of the state. Nine of those who joined up were Lingayats. The others were Vokkaligas, the CM’s own castemen. Krishna, of course, omitted any mention of caste, speaking only of "communal" forces—saying it was only the Congress that had the ability to stop them. Political sources say that of the remaining seven MLAs of the AIPJD, four were expected to migrate to the BJP while the others may go to Deve Gowda’s JD(S).

In Maharashtra the same day, senior Shiv Sena leader and former Union minister Babasaheb Vikhe-Patil, who had left the Congress earlier, too returned to the fold. Vikhe-Patil had been upset ever since he was dropped as Union heavy industries minister at Bal Thackeray’s behest. Maharashtra was the source of more good tidings. According to aicc general secretary in charge of the state Vyalar Ravi, the first two rounds of talks with Sharad Pawar’s ncp have been successful.