The sour taste of cream; Anglers after small fry; A train of thought; A diplomat who sprints on track two; A streetcar named desire; Junkyard charity 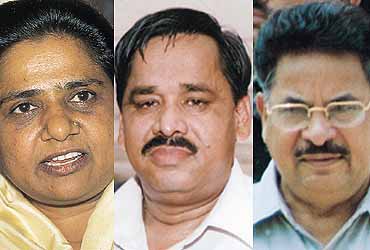 outlookindia.com
-0001-11-30T00:00:00+0553
LUCKNOW, UTTAR PRADESH
The Sour Taste Of Cream
The truth about the Taj corridor is out and the BSP’s feisty ex-UP chief minister Mayawati and her top advisors are in a soup. On September 18, the Supreme Court directed the CBI to register FIRs against Mayawati, her tourism minister Nasimuddin Siddiqui and a clutch of top-ranking bureaucrats involved in the decision to construct a Rs 175-crore Taj heritage corridor project at Agra.

The CBI report, which was submitted to the apex court last week, reportedly contains details of a veritable treasure trove belonging to Mayawati. Preliminary investigations have put her unaccounted assets at about Rs 60 crore. These include her properties in Ghaziabad, Noida, Mumbai, Bulandshahr, Delhi and Banda. CBI sleuths say the benami properties were bought under names of her closest political aides: Siddiqui, Ramvir Upadhyay, Dharamvir Singh Ashok and Narendra Kashyap. Included in this is a palatial bungalow in Delhi’s upmarket Sardar Patel Marg, which was registered on August 19, 2003, in Mayawati’s name. The cost of the bungalow: Rs 7 crore. It attracted a stamp duty of Rs 47 lakh.

Says lawyer Prashant Bhushan: "The case is quite serious. The apex court sees in it prima facie evidence of corruption. Hence the FIRs. And now that she is no longer an ally of the bjp, her main rival in power in UP will doubtless ensure that evidence would not be difficult to unearth." What the case means for Mayawati’s political future is going to be watched most closely.