A payload full of dust, Renal failure; A diabetic shock; Friendly neighbours; A literate move and Looming menace on the skyline 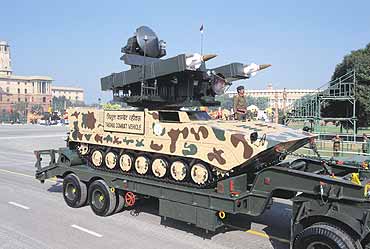 outlookindia.com
-0001-11-30T00:00:00+0553
BANGALORE, KARNATAKA
A Payload Full Of Dust
One, two, three, four...and many more ‘successful’ test firings. The charade of the Trishul missile project continues as the Defence Research and Development Laboratory, Hyderabad, is keen to prove a point: who cares if the three services are not interested in the missile, the scientists and engineers would still like to demonstrate "successful flights" from the interim test range at Chandipur-on-Sea in Orissa.

The team has been releasing news of these "successful flights" to wire services every evening, though a couple of times the missile did not even blast off from the launcher. And when it did, it fell short of its range, say senior sources in the Defence Research and Development Organisation (DRDO). The terse wire service despatches only mention the time of launch and that the sophisticated surface-to-air missile has been developed as part of the integrated guided missile development programme.

Interestingly, none of the tests were carried out with a warhead. In fact, DRDO sources have admitted to a couple of failed tests over the week as well as the fact that only "dummies"—only the shell and engine—had been test-launched. These tests would continue as they would throw up interesting data on the technologies and systems such as engines and the air-frame for the next generation of missiles being designed by the DRDO. They would help improve the accuracy, range and split-second reaction of the new missiles. The spin-offs could be transferred to fields such as industrial automation and robotics, the sources said.

The sources confirmed the DRDO has played the requiem for Trishul. Beginning this financial year, no funds would be allocated for the project.