Velvet-Curtained Egowash; A Damning Miss; Breathless Sleuths; A Grave Of Black Diamonds; Bombay Burlesque; And He Said, Lord Have Merc...y 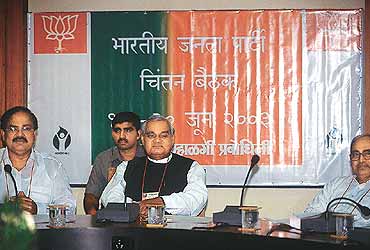 Prime Minister A.B. Vajpayee’s speech was just a dose of unconvincing PR. Magnanimous in his victory, the ‘Vikas Purush’ went out of his way to praise L.K. Advani and Naidu, the objects of his outburst a scant two weeks ago. Overnight, Advani turned into a "source of strength" for the PM who also declared himself astonished by Naidu’s "energy level" and enthusiasm for party work. Naidu, on his part, stuck to comparing the Vajpayee-Advani combination to the Hindutva ideologues Shyamaprasad Mookerjee and Deendayal Upadhyay. The media wasn’t privy to the interaction between No. 1 and No. 2, though. Advani arrived late on Wednesday night from the UK and Vajpayee left by noon the next day to prepare for his China visit. Clearly, the BJP has realised the wisdom of keeping giant egos apart, at least for the moment.