Who will pay the blood money?; Native lightness of touch; Citizen Jane; Faux ambush; That's the limit; Signals from jail 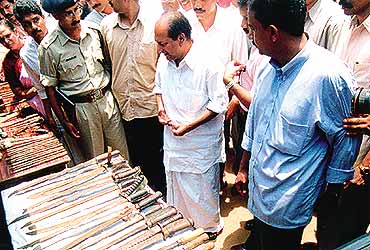 The special branch reported the possibility of violence to the police top brass. The cops, surprisingly, responded by downgrading the pickets on the beach. Locals had reportedly spotted strangers in the area before the carnage. Why the police chose to ignore these signs is something the crime branch team, led by IG Mahesh Kumar Singla, has to find out. Kozhikode commissioner T.K.Vinod Kumar says he was clueless about the impending tragedy. The question is, if it was revenge for the January murders, why kill nine people 16 months later? Did extraneous elements exploit local sentiments to spawn terror?

The RSS’ fishermen wing had earlier declared Marad off bounds for all political parties. This only added to the tension. But Marad has not been the first communal flare-up since the udf government came to power two years ago. The RSS and the Madani-led National Development Front activists had clashed in Pathanamthitta. Subsequently, VHP leader Ashok Singhal toured the state last month spewing venom against the minorities. CM A.K. Antony promised to set up special courts to try communal offences. But nothing has moved. The sooner the politicians see the writing on the wall, the better. Or else, "God’s Own Country" will get eternally caught in this ever-expanding loop of violence.