A mutant virus walks up the aisle; A stickler for values; Casino royale; Keystone cops; Complex persecution; and An iconoclastic venture 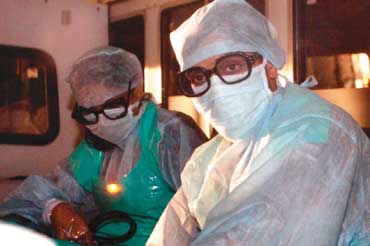 outlookindia.com
-0001-11-30T00:00:00+0553
PUNE, MAHARASHTRA
A Mutant Virus Walks Up The Aisle
The scare started when Stanley D’Silva, who hails from Ambernath near Mumbai and works at a restaurant in Jakarta, was travelling to Mumbai with his mother Vimla and sister Julie for the latter’s wedding in Pune on April 21. He caught the dreaded SARS virus on board the airline, which was found to be carrying two SARS victims. Stanley subsequently passed on the infection to his mother and sister. It was after their blood samples tested positive at the city-based National Institute of Virology that all hell broke loose.

Health officials relented to a quick ring ceremony and the marriage was solemnised at the Oldham Methodist Memorial Church. As soon as the 10-minute service was over, the bride was whisked off to an isolation ward. Nearly 50 of the 300 guests, including five children and the pastor, all presumed to have been in contact with the patients, have been quarantined. Despite assurances, residents in the area are deserting their apartments or shutting their doors on outsiders. All basic services have come to a halt. Some are livid that patients were admitted to a private hospital in Gultekdi, instead of a chest hospital as per SARS guidelines. The patients were shifted to a different floor and the rest of the hospital was closed. The hospital staff has been quarantined and are awaiting their own blood test. The quarantined relatives of the D’Silvas, after being reduced to "social outcasts", too are waiting for their blood samples to be collected.

Stanley’s uncle Joseph Pawar asks: "How long will we stay under house arrest like this?" The church, where the wedding happened, has been closed. The groom’s family has been quarantined and no one’s turned up to collect their blood samples either. Stanley is said to have completely recovered, but few are willing to believe the good news.

The Old Vs The New