Home National
STATES OF THE NATION

No superglue for broken promises (follow-up to A Shotgun Wedding); A marriage made in the mob's lair; Elephants in exile; Bullet holes on the sandalwood; To h 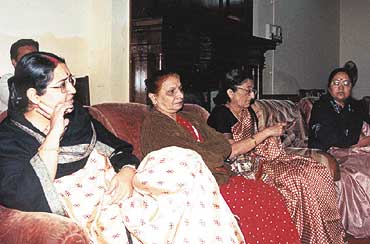 The National Women’s Commission (NCW) too has taken up the case and on December 16 an NCW team, led by its chairperson Poornima Advani and members Shankar Sen, Nafisa Hussain and Baby Rani Maurya, were in Patna on a fact-finding mission. Before leaving Patna, the team observed that the cops were apparently in cahoots with Sultan Mia. "After conducting the inquiry I’ve given a 10-day ultimatum to the state police to produce Kanchan Mishra before the Commission. If it fails to do so, then we will be forced to issue summons to the police officials," the chairperson said at the end of her visit.

In its earlier report, Outlook had inadvertently reported that the ‘marriage’ reception was organised at the residence of Ejaz-ul-Haq, a minister in Rabri Devi’s cabinet. The reception was actually held at the house of another rjd Muslim leader from Seemanchal.