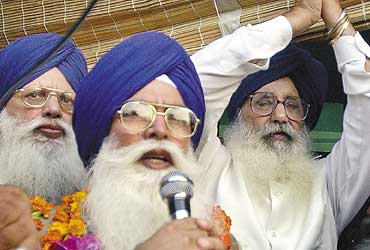 outlookindia.com
-0001-11-30T00:00:00+0553
CHANDIGARH, PUNJAB
The King’s Royal Misadventure
Congress chief minister Amarinder Singh has inadvertently de-secularised Punjab politics by finding himself in the midst of the generally controversial Shiromani Gurudwara Parbandhak Committee (SGPC) elections. This has given his predecessor, Parkash Singh Badal, the opportunity to charge him with interfering in religious matters. What is worse for the chief minister is that Badal’s nominee, Kirpal Singh Badungar, won the elections.

This, despite Amarinder Singh pulling all stops to ensure that the rival Tohra faction won. While maintaining law-and-order in the run-up to the elections was important given the sensitive nature of the exercise, the CM allegedly went overboard. Houses of SGPC members were searched, Section 144 was imposed, all the bazaars and lanes around the Golden Temple complex were barricaded. Tourists were asked to vacate hotels and guest houses. Amritsar was like a city under siege with 30,000 policemen deployed on its streets.

A triumphant Badal is trying to give state politics a new twist by turning it into a Panthic matter and painting Amarinder as a rival not just of the Akalis but of the Sikh Panth. He has asked for the chief minister’s resignation. In fact, the pro-Badal SGPC has demanded that the Akal Takht jathedar summon Amarinder for "violating the Sikh maryada". The CM was apparently acting on the advice of his old friend and former speaker, Ravi Inder Singh, who has joined hands with G.S. Tohra.

But why is the SGPC election so political? Both the Congress and the Shiromani Akali Dal believe that their position is strengthened if they control the SGPC. Also, the committee has an annual budget of Rs 200 crore.