A hit-and-run operation and its hidden truths; Waiting for the breakfast mail?; An off-track game; The myth of eternal return; A miscarried soap opera and False alarms don't come for free. 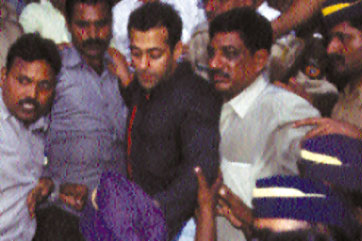 outlookindia.com
-0001-11-30T00:00:00+0553
MUMBAI, MAHARASHTRA
A hit-and-run operation and its hidden truths
The law is finally catching up with Salman Khan. Investigations into the hit-and-run case—the star allegedly killed one man and injured four others—has opened a can of worms about a string of other misdemeanours. Not only has it come out that Salman was drunk and didn’t have a valid licence when he drove the Toyota Land Cruiser that ill-fated night, but it’s now revealed that the vehicle didn’t even belong to him. Unable to trace the owner, the cops are looking into possible underworld involvement in the purchase of the vehicle.

Being accused of mafia links is not new for Salman. As the star of tainted producer Bharat Shah’s Chori Chori Chupke Chupke, he was interrogated about possible underworld connections by the police two years ago. And like many others in tinseltown, he has been photographed with notorious gangsters in the past.

Under mounting public pressure, the police have finally been forced to charge the actor with the non-bailable "culpable homicide not amounting to murder". They have now placed him in custody in the crime branch cell, reserved for hardened criminals. And acting on a pil by eveninger Mahanagar’s editor Nikhil Wagle, the high court ordered that the actor pay Rs 19 lakh as interim compensation to the victims.

Rabbits In The Hat?