The irascible little chief has a big rebellious clan, Spirit willing, flesh weak, Flames of freedom, Terror's swift and fatal volley, Is it Electro, the thunderbolt and The royal Bengal liberationists. 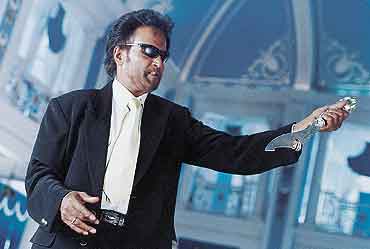 CHENNAI, TAMIL NADU
Spirit Willing, Flesh Weak
Aweek before the release of his latest film, Rajnikanth told an audience in Hyderabad: "If Baba turns out to be my biggest hit, I’ll quit films and...." The unstated hint was he would join politics. Looks like his fans and the people of Tamil Nadu have decided that Rajni should stick to making movies, but minus the "spiritual crap", as a fan put it. From day three the theatres wore a desolate look. The irony of a Fans Association banner that declared "From 2006 it will be Baba rule" was too strong when fans were selling tickets they had booked in advance at discounted prices. What kept the media’s interest alive was the stray incidents of violence triggered by PMK chief Ramadoss’ call for boycotting the film. Rajni threatened legal action, but soon the two decided to bury the hatchet.

Since Baba was directly distributed by Rajni’s Lotus International, the exhibitors have borne the brunt of the loss. "No Rajni film has done so badly since Nattukkoru Nallavan in 1991," said an exhibitor. Disaster struck Rajni on the personal front as well. Rajni’s spiritual guru, US-based Swami Satchidananda Maharaj, who accompanied Rajni to the premiere, developed chest pain while watching the film. He later died and Rajni flew away to the US with the Swami’s body. There’s speculation that Rajni will turn out a quick flick to compensate for this loss. For now, no one is talking about Rajni entering politics. And Ramadoss is smiling.