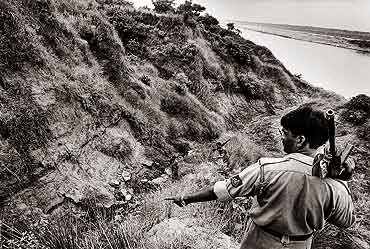 BHOPAL, MADHYA PRADESH
Curry Western, In A New Flavour
Man Singh is dead. Phoolan Devi too is no more. And Malkhan Singh laid down his arms in 1982. But the legacy of the ‘baghis’ continues to haunt the ravines, with an ironic twist. Chambal no longer resounds with tales of legendary vendetta and fierce battles to reclaim lost honour. The gangs, who had in recent years turned from old-fashioned dacoity to kidnapping for ransom and extortion, are now even teaming up with urban mafia to this end.

There are a dozen big gangs with 200 dacoits active in the racket. Last year saw 1,500 abductions. The mafia in towns identify the victims, the dacoits carry out the kidnappings.

Recently, the notorious Gadaria gang ambushed a private bus carrying 50 passengers and held four of them hostage in the jungles of Boratila in Shivpuri district. It’s not only the wealthy who are targeted. Recently, the Mahabir Gujar gang kidnapped 24 shepherds. Says Bhind MLA...