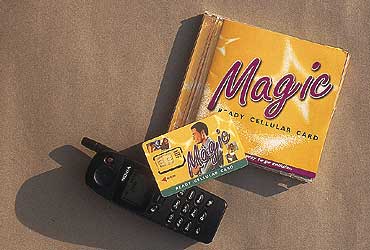 
Encashing Mobile Credibility
Till last week, buying a mobile phone cash card was a lot simpler than buying a packet of biscuits. Not any more. For security reasons and to prevent misuse, the government has made it mandatory for all mobile service providers to verify the identities of cash-card buyers. Says Sudershan Banerjee, CEO of the Speed card company Hutchinson Essar: "It’s our responsibility as an industry to put processes in place that curtail the national security threat."

To get a cash card now, one will have to furnish any one of the following documents; driving licence, ration card, election I-card, PAN or passport. Expectedly, the day this rule was announced, sales of cash cards—which are over half of total cellular connections in India (80 per cent in Delhi)—dropped by over 90 per cent. Service providers, however, appear upbeat.

This confidence doesn’t merely stem from the immense popularity of cash cards. Rather, it has more to do with our ingeniousness for circumventing rules. It’s next to impossible to fully verify the authenticity of the documents submitted by buyers. Driving licences, for instance, are issued by different states and are valid for national use, so how does one establish the local credentials of a buyer? And what about virtual calling cards (VCCS) for fixed phones, which are easily available, and cheap? Nothing stops one from using a VCC from any location, even a public booth or instrument! So, service providers wonder why cellphone users alone are being targeted.