Callousness, cussedness and apathy combine to write a tragedy of massively cruel irony 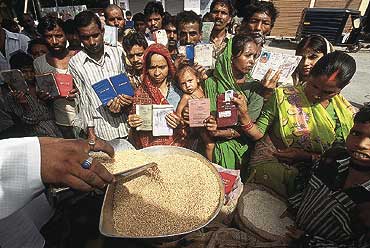 outlookindia.com
-0001-11-30T00:00:00+05:53
When the Supreme Court last fortnight censured the Centre and states for failing to provide food to starving millions despite a 60-million-tonne surplus of foodgrains rotting in godowns countrywide, it was exposing serious flaws in the government's food policy and the new Targeted Public Distribution System (TPDS). What particularly shocked the apex court was a Government of India affidavit which stated that against the minimum basic requirement of 75 kg of food per month per family of five, it was providing, on an average, a mere 10 kg through the public distribution system!

The court was amazed to know that 16 states and two Union territories hadn't even identified Below Poverty Line (bpl) families. Orissa, in the throes of a starvation-death controversy, doesn't have a clue on the precise number of poor it has. Outlook' s own investigation reveals an inexcusable arbitrariness in the bpl and 'poorest of poor' estimates. Thus, till the court came down on the government, Delhi had no bpl families, leave alone the poorest of the poor category. The court's criticism belatedly has the Delhi administration talking about a bpl population of at least 20 lakh families.

The government's inability to provide for the poor despite an increasingly unmanageable foodgrain surplus is a sordid tale of callousness and corruption. For one, the central and state governments are reluctant to accept the existence of a large constituency of poor (325 million bpl and 50 million of the poorest of poor) who are either underfed or are on the brink of starvation. In fact, no state government has yet accepted the occurrence of a starvation death.

But here are some grim facts that even central and state governments do not deny: