Start Of A Glad Season? 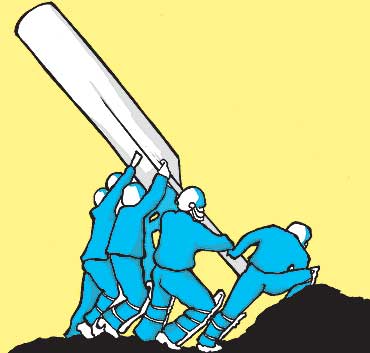 For Indian cricket, this extraordinary season has run on two tracks as yet: riveting performances and sweet revenge on the one, sentimentalism and grand gestures on the other.

Australia were stuffed by the New Age cricket that Ricky Ponting had threatened, but M S Dhoni deployed so ruthlessly instead. Has the pecking order changed? Are the Aussies in a free-fall? Is India top of the pops now? These are the FAQs dotting the cricket landscape. The next 12-18 months should provide some concrete answers.

But no less compelling was the poignant melodrama involving the five senior pros in the side which could have come straight out of a treacly Rajshri flick where do-gooders abound, altruism and sacrifice are seen as matter-of-fact, differences between people are settled in the nick of time, and finally all ends well.

Okay, I am being a tad facetious, but the simultaneous retirements of Saurav Ganguly and Anil Kumble became an occasion for national lament not just for their fantastic records, but also because of how the Indian dressing room itself reacted. What seemed to heighten the emotional quotient was the overt support Kumble and Ganguly got from the other oldies -- Sachin Tendulkar, Rahul Dravid and V V S Laxman -- and on the last day of the series from Dhoni, who asked Ganguly to captain the Indian team when victory was there for the asking.

Even allowing for the fact that public figures will exploit any opportunity for PR which a hyperventilating media is only too willing to project, these look like unusual times in Indian cricket. Perhaps it has something to do with the personalities of the players concerned, just perhaps because of the extraordinary circumstances of the past few years.

Indian cricket otherwise, as we know, is replete with stories of chicanery and strained relations between players. Some early famous instances involve the captain Maharaja of Vizianagram (Vizzy) who, in 1936, among other things, was instrumental in sending back Lala Amarnath from England mid-way through the tour. One well-known cricketer of the 50s once told me that the dressing room was a 'snakepit' with some players openly confabulating to drop catches off one bowler so that he would be dropped.

Closer to our times, skipper Ajit Wadekar and Bishen Singh Bedi famously fought at the Indian High Commissioner’s party in London in 1974 while on tour. The mutual admiration society between Bedi and Sunil Gavaskar collapsed so early and so completely that they did would not even speak to each other for long periods. Gavaskar also had his differences with Kapil Dev that are now part of Indian cricket lore.

Of course, differences between cricketers is not restricted to Indians. Jack Fingleton and Don Bradman, never saw eye to eye on almost everything. So strong was the mistrust between Vic Richardson and Bradman that it has spilled over a couple of generations and consumed even the former’s grandchildren Ian, Greg and Trevor Chappell. Sobers and Kanhai could hardly get along and Geoff Boycott, everybody knows, was nobody’s favourite in the England dressing room throughout his long career…I can go on and on.

While cricket is a team game in theory, in fact, it is a highly individualistic sport and the dressing room a microcosm of life itself where ambition, envy, competition and ego run concurrently with camaraderie and fellow well-being. Indeed, in existential terms the negatives can easily outnumber the positives, which is why when a dressing room bonds well, for whatever reason, it provides not only good results, but a reason to rejoice as well.

It is not my intention to give the Fantastic Five (to leave Kumble out of this would be blasphemy, surely) character certificates, but to understand how they resolved their differences to put Indian cricket in a happier, stronger position than it was, say, five years ago. It is simplistic to believe they have never had differences. Major ones, in fact, I would presume.

For instance, Laxman will disagree with Ganguly even now for being dropped from the 2003 World Cup, Tendulkar can’t imagine Dravid declared when he was on 194 against Pakistan in 2004, Kumble will wonder till the end of his life why he was so shabbily treated by Dravid during the 2007 World Cup, and Ganguly is unlikely to forget that nobody really from this group really stood up in support when Greg Chappell wanted to hack him.

By end-2005, unknown to many, Indian cricket was hurtling into a grave crisis. The historic email sent by Chappell to the BCCI, while castigating Ganguly, had got every senior player embroiled one way or another. By the time 2007 World Cup ended, Indian cricket had hit rock bottom, and there were was a widespread demand for the removal of all seniors by a disillusioned country which has resonated till currently.

It’s been an extraordinary recovery since then, and thanks in a large part, to these seniors. Under threat from newcomers, selectors and public opinion, they chose to reconcile their differences, but did not rest on their laurels. They went out, proved their form and collaborated on a magnificent revival that not only silenced critics, but also won them the respect of the cricket world.

In their success and conduct over the past 12-18 months -- as that of the magnanimous Dhoni -- Indian cricket could seek a direction for the future in which meritocracy is paramount, parochialism becomes obsolete, and team spirit does not remain a mere euphemism.

Ayaz Memon, editor-at-large with DNA, has been writing on cricket for 30 years. A slightly shorter version of this appears in print