It's boomtime for many 'English-speaking institutes' in the state 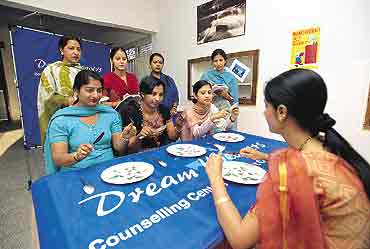 Gone are the days when rustic Punjabis migrating to foreign lands boarded flights out of the country speaking just their native language. Droves of Punjabis now think nothing of taking a bus from their village to the nearest town to learn how to speak English and generally smarten up in the ways of the western world before they face the embassy officials.

Not surprisingly, it's boomtime for the many English-speaking institutes that have mushroomed across the state. And if you thought they teach only English, think again. Many of them are now doubling as personality grooming centres, training starry-eyed girls from villages in the art of netting nri husbands.

The spurt has come about in the last nine months or so, to be precise, after Canada made it compulsory for migrants to get a qualifying grade in the International English Language Test (IELT). The UK has followed suit by making IELT compulsory for applicants seeking working visas. Although qualifying in the IELT has been compulsory for migrants to Australia and New Zealand ever since these countries opened their doors to immigrants, even they have upped the required grades. "It is clear that these countries are now focusing on getting quality manpower and institutes like ours have stepped in to cater to the demand," says S.S. Dhillon, who runs the British Academy in Jalandhar.

With wife Kiranjot, the couple runs two month-long courses on confidence-building and personality grooming, mainly patronised by young girls. Like Sukhraj Purewal, who travels two hours daily by bus from her village in Nakodar to learn how to speak English. She is taught western etiquette, forms of salutations, poise, the rules of conduct in a group, and other things, including how to dress suitably once she touches foreign shores.

At Dreamweavers, an upmarket institute in Jalandhar, Sandeep Soni is making...