So how does the finale measure up with a non-worshipper of the Star Wars cult? Rather well. 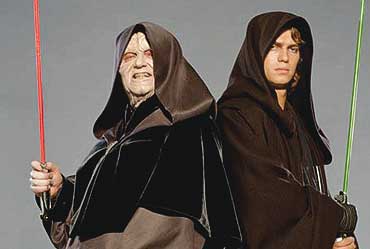 This review comes with a warning. It's written by someone who doesn't belong to the Star Wars cult, who didn't grow up with the smashing mythology of the Jedis and the Siths and who is rather old-fashioned in her belief that cinema is all about human beings, their relationships and emotions than about marvels like Master Yoda, R2D2 or C3PO. So, how then does the finale measure up with a non-worshipper? Rather well.

The technical wizardry, the special effects, the ear-buzzing sound, the mind-numbing action and those magnificent light-sabres are all there. So are the many CG robots and androids. But apart from the larger-than-life spectacle, the thrill and excitement, there's a Faustian element to the story that's very attractive and heart-tugging. A good man knowingly selling his soul to Satan—the tragedy of a voluntary fall. It's fascinating to see how easily good turns evil, how heroism crosses over to villainy, how innocence gets tainted. You have to be a devout follower of the fable to be able to go back and forth into the various sequels and prequels to feel deeply for Anakin Skywalker's (Christensen) transformation into Darth Vader and appreciate how his kids, Luke and Leia, become enemies of their own father.

In Attack of the Clones, Anakin's master Obi Wan Kenobi (McGregor) talked with foreknowledge about his doom at the hands of his protege: "Why do I feel that you will be the death of me?" In Revenge of the Sith you have Anakin at the centre of a rift-ridden Jedi Council and a crumbling republic. He is distraught with dreams of loosing his wife Amidala (Portman). Chancellor Palpatine (McDiarmid), who is actually the Sith Lord Darth Sidious, woos him to the side of the evil. The condition is clear: Sith powers can help him save his wife but he'll have to loose himself and his goodness. The unusually gory and grisly climax finds Anakin taking his first breath as Darth Vader. Of course there are the token political metaphors to give a touch of contemporaneity to the proceedings. Lots of contrived talk about democracy and dictatorship. Like when Anakin tells Kenobi: "If you're not with me, you're my enemy." Wonder if Bush has been listening.