Irrfan 'Maqbool' Khan is a hall of mirrors, reflecting ever so many shafts of grey 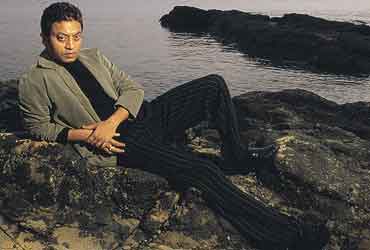 outlookindia.com
-0001-11-30T00:00:00+0553
A loud disco beat is causing vibrations outside the industrial hall where Irrfan Khan is shooting, days after his Maqbool opened to rave reviews. Inside, the sets for the song sequence include a uniquely Bollywood combination of a stained-glass altar, red Chinese lanterns, an open-top sports car with bronze painted extras, supposedly displaced African tribals sleeping inside.

Half expecting to find Khan doing an item number, one finds him looking half embarrassed in a Pathan suit and covered head. Clearly, in an industry where he's been around for more than a decade, Khan's career is not yet keeping pace with his sizzling rebirth. Despite winning over audiences with his smouldering softness in Maqbool. Despite making the transition, after years of playing the villain in some forgettable TV serials, to searing lead performances in two new-age Hindi movies.

It's a jump that Khan, like most TV actors, has been preparing to make for a while, except he brings to his roles an aching eloquence rarely seen in Hindi cinema. In Bollywood, a world of unspoken rules that separates character actors from lead actors and often relegates TV actors to a grade below big time, Khan is now being talked of as one of the industry's greatest forgotten talents or at least one of its longest maturing ones.

In Maqbool, where he is the Indian Macbeth, Khan plays the gangster whose boss's seductive moll melts his rock-solid loyalty as though he were reflecting his insides.

"He doesn't have that traditional Hindi film style of emphasising only the dialogue, instead he tries to get a very real attitude a character should have," says Tigmanshu Dhulia, Khan's friend and director of Haasil, in which Khan has played the award-winning role of a university leader for which he went to Allahabad to get a fix on the accent and the attitude.

But in his long years of television and waiting, Khan says he had begun to have doubts although even as a student at the National School of Drama he'd always wanted to be a film star. Ironically, for a man who remembers himself as being in a hurry to get there, it has been a long wait.

Dhulia, a few years his junior at the NSD, remembers him as shy and introverted, which Khan says was because his heart was in the movies. "Every night I was thinking of a formula so that I would wake up in the morning and be a film star," he says.

But stardom unfolded a strange foxtrot for Khan when he came to Bombay. Roles in the Dimple Kapadia-Shekhar Kapur starrer Drishti and a Shyam Benegal movie gave him no momentum in an industry that had just a 'hero' and a 'villain'. Khan took on the greys in TV serials, starting with his popular role—the father of an actor nearly his own age—on Zee's Banegi Apni Baat and moving on to several other roles that started with characteristic intensity but then degenerated into physically demanding but creative wastes. "Those were bad days," he says.

"Even then he wanted to take risks," says Deeya Singh, director of Banegi..., one of Khan's first assignments in Bombay. "He always wanted to bring out shades in a character. He'd talk less but keep the director on his toes because he'd ask very detailed questions about the role and the script, although his wife was writing it." The role slotted him as a villain.

Even now, Khan says, most of the offers he gets are for villains in roles that do not allow the greys and complexities he has come to be associated with. "In Maqbool the biggest challenge for me was to make him commit the crime and yet create a sense of pity for him. Make people feel bad when he dies."

Although people within the industry did feel he could pull off exacting roles such as this, they never had them for him. Frustrated, Khan cut down on TV serials and did a few film projects, including some international ones."I had begun to ask myself if I really was a good enough actor," he says.

But once Khan got another role as a guilt-ridden, soul-searching warrior in the British-made film, The Warrior, he immersed himself in the lead role of the BAFTA award-winning movie. However, even as the film started raking accolades for Khan on the festival circuit, he remained fairly unknown in India. Finally that summer, Khan outshone the movie in Haasil and accepted every award that came his way for his role as a college politician. "He knew how important this film was for all of us and gave it that intensity," says Jimmy Shergill, hero of the movie.

With Haasil, Khan got what he wanted. Unknown people started repeating his dialogues to him and the perennially almost-famous star suddenly and seriously became big. The actor who never went asking people for work found work coming to him. The kind of work he always wanted to do. Vishal Bhardwaj offered him Maqbool after several top stars like Akshay Kumar and Akshay Khanna rejected it, giving Khan the chance to emblazon his own searing stamp.

And how. He says he's never read the Shakespeare play. Yet with minimal dialogue, he managed to powerfully convey Maqbool's subdued longing for his boss's moll, his succumbing to her wiles and finally watching his world collapse as he wallowed in his guilt.

Although a bound script, an acting workshop before shooting and a dream cast are a rarity in Bollywood, Khan, who's now shot to an alternate screen idol status, says he wants more of that. He wants a role he can immerse into. "Characters take a lot out of you but you too want those that give you something back, like this one did," he says.

Although he and others in the industry have wondered why it's taken him so long to reach where he has, Khan says it's only new-age Bollywood films that have created the space and the characters in conflict he always wanted. "I think he was born for this time," says Dhulia. Khan thinks so too: "I think destiny had designed this for me. If I had become famous earlier, I may not have been able to do what I am doing now."

Deeya Singh, who now directs Sony's cult serial Jassi Jaisi Koi Nahin, too says it has been a belated but befitting flowering for Irrfan. "I think the greatest and bravest thing is that he's always been very selective about what he does."

Now there's a TV crew waiting to interview Khan, the newly-minted star. But he wants to get out of his Pathan suit and bandana first. Probably to dress like the cerebral star he now is.