His burdens are many: a broke treasury, an obdurate trade union bloc, detractors within and without his party…. Will popular support help the Kerala CM pull off his toughest act? 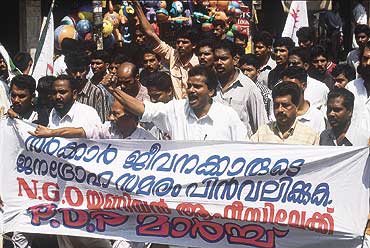 Given Kerala’s tradition of supporting the worker against the state, the non-gazetted officers union (ngo union) should have normally garnered much public sympathy. Instead, the man on the street who has tired of the harassment he is put through by the babus at collec-torates and taluk offices is supportive of the government move. The strike has also led to garbage piling up on the streets, leaving citizens further incensed. That public sentiment is not with the employees is very perceptible. Admits K.N.K. Nambudiri of the CPI, who is also general secretary, Joint Council of State Service Organisations: "This something we have been discussing. People do have a poor perception of government employees. The feeling has always been there historically because they see us as instruments of the state. But we are trying to change that view."

So even as the ngo union and the dyfi—the student wing of the cpi(m)—held rallies, there have been counter-rallies in Thiruvananthapuram and other district towns. On February 18, Gandhian and freedom fighter K.E. Mammen held a protest outside the secretariat, asking the employees to go back to work and teachers to return to school. Mammen’s message was that the secretariat should not be made into a battleground. Meanwhile, the business community has been cooperating with Antony by filing sales tax in two nationalised banks. Already, Rs 315 crore has been deposited this month against the target of Rs 360 crore, which the finance department says will be achieved.