The LTTE leader speaks on the peace talks between the Tigers and the Sri Lankan government. More Coverage 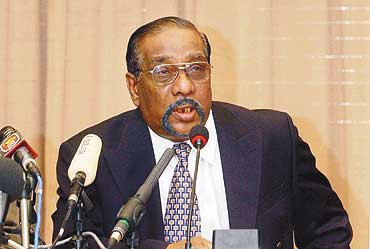 outlookindia.com
-0001-11-30T00:00:00+0553
LTTE leader Anton Balasingham is no longer the sabre-rattling Tiger, baying for the blood of the Sinhalese and Muslims. He took time out from the hectic negotiations between the LTTE and the Sri Lankan government in Nakthon Pathom, Thailand, to talk to Lasantha Wickrematunge. Excerpts:

Are you satisfied with the progress made so far and the implementation of the ceasefire agreement (CFA)?
There is a general satisfaction that the truce agreement is working very well without any major outbreak of violence or (violation of) the ceasefire conditions.

But the Muslims in the east have their complaints?
That's why we called the leader of the Muslim Congress to Wanni. Our leader V. Prabhakaran and Rauf Hakeem jointly signed an MoU where we pledged that harassment, extortion and abductions would be stopped. Ever since, almost all these complaints have stopped apart from one or two stray incidents, which took place without the knowledge of the local LTTE leadership. We have impressed upon Hakeem that when issues facing the Muslim people, or even other core issues, are taken up for discussion, they will be allowed to articulate their views. Unfortunately, some Muslim MPs are already demanding assurances and commitments. We have just started the peace process. It's unfair and unacceptable to make certain demands either on the prime minister or the LTTE, exploiting the very fragile political situation in Colombo.

How do you explain the success of this peace process, in comparison to efforts of the last seven years?
For the first time, the LTTE leadership and that of the government, that is Ranil Wickremasinghe's administration, are sincerely and seriously committed to peace. This phenomenon had never arisen in the past. This is also the first time a third party has offered facilitation. That we think is crucial, given their international experience in resolving conflicts; they don't have any security or political interests in this region. There is also an international team of monitors looking after the terms and conditions of the ceasefire, which hadn't happened in the past. Now, whenever there are some minor problems, the international monitors intervene and resolve it. Also, for the first time the entire international community—because of the war against terror and the situation in South Asia—is focused on the conflict. If this war (of 20 years) can be restrained and the peace process is advanced and a solution is reached, then it can be a fine global example for (resolving) all conflicts in the world.

President Chandrika Kumaratunga and former foreign minister Lakshman Kadirgamar are insisting on the formation of a joint committee to review the progress of the talks and for a discussion on core issues at this stage. How do you see this?
This is precisely what Chandrika and Kadirgamar insisted upon seven years ago, which led to the breakdown of the peace process. For them, some kind of devolution (of power) to the north and east or north separately and east separately—I don't know what they have in mind—is the solution. We have explained what we mean by fundamental issues—it entails a radical, structural transformation of the Sri Lankan polity. We have to bring about a new constitution. The current constitution is not going to resolve the problem permanently. As far as the Tamils are concerned, it institutionalises a chauvinistic ideology giving primacy to a particular religion, language and so on. We have advocated regional autonomy for the Tamils as a form of internal self-determination.

LTTE leaders in the north and east have been in a state of perpetual war for the last 20 years. How are they adapting to the new ground situation?
We have a military structure that is confined to the barracks.Unlike the Sri Lankan armed forces occupying the Tamil areas, they are confined to barracks in jungle areas. This military structure will be there until a permanent solution to the ethnic question is resolved. Even after, we have to think of arranging a security system for the Tamil people in a federal system or regional autonomy. Therefore, this military force will be there to protect the life and interests of our people. Their formation may be structurally changed.

Would a final settlement be on the basis of one Sri Lanka?
(Laughs) Yes, Sri Lanka will be there. It won't disappear into thin air. But there will be two systems of government, where both the Sinhalese and the Tamils can coexist. It will be imprudent on my part at this stage to spell out the nature and structure of that final settlement which is envisaged. But the Sinhalese need not worry that the LTTE is going to divide the country, that we are separatists or secessionists. We are opting for some radical solutions so that Tamil demands can be accommodated without the division of the country. The real model, system or structure, can be discussed between the parties at a later stage.