Squeeze Me Another, Sam

It's liquid energy. And all of India is going with the flow. 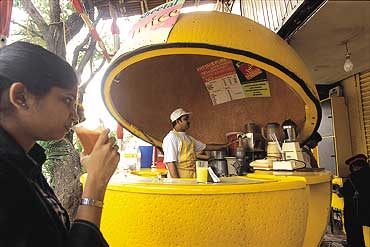 outlookindia.com
-0001-11-30T00:00:00+0553
Zenia Mehta, a 32-year-old homemaker in Mumbai, has just found herself a brand new squeeze. It's aloe vera juice, a wonder food for the body—made from the succulent plant of the same name—that pumps your body with vitamins, amino acids, glycoproteins and boosts immunity. Now being sold in a sporty flip-top bottle, aloe vera is the latest drink to be snapped up by the 'juicerati'—people like Zenia who love guzzling glassfuls of aloe, grapefruit and pomegranate juice for their magic properties and flavour of exclusivity. And for the rest of us, always ready for a great gulp of goodness, the natural beverage market has never been as vibrantly beckoning as right now.

Sap on tap has always been easily available at street corners and in homes with juicing machines and willing hands, but there's always been a need-for-nectar that satisfies the time-hygiene-health trinity. Today, urban households have their breakfast with branded orange juice. Out on the streets, native blends like Ganga Jamuna compete with exotic elixirs like Apple Mint and Cranberry Cove, made by posh juice bars like Amoretto's and Tropical Smoothie. Even the humble but mightily healthy extract of karelas (bitter gourd) advocated by naturopaths now has a branded rival: Lehberry Juice, made from Himalayan berries that has been developed by, believe it or not, the Defence Research and Development Organisation (DRDO). And it's being sold as the ultimate new bio-force. 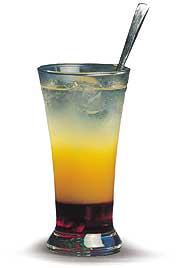 Call it fluid health insurance, a natural form of self-protection or the laziest route to fitness. But the fact is, the juicerati are getting gung-ho about drinking fruit. In Bangalore, Aarti and Sridhar Vedantham and their son Abhay consume 10 litres of Tropicana a month. "Juice is our number one drink through the day," they say. In Delhi, Vijay Shankar, senior editor, Tej Publications, says: "Juice is my breakfast. Besides regular varieties, I also make my own blends, like with spinach, amla and ginger, or carrot and spinach." In Mumbai, 24-year-old travel consultant Tisha Singh declares: "No colas and no coffee, only water or apple juice for me." While Meena Thaker, 29, a media professional who has just moved to Delhi, says, "I really miss the orange man in Mumbai who used to stand inside a giant tangerine and hand out a glass of chilled OJ."

"Juice is the only way you can squeeze the goodness of six apples into a glass. And this realisation is making city people desperate for health and wellness drink up with a frenzy," says Delhi-based diva of diet and nutrition Shikha Sharma. "People want to return to nature and the juice boom is a vibrant expression of this feeling," says Jagdeep Kapoor, MD, Samsika Consultants, who's a done a qualitative study of this market. He values the organised juice market at Rs 452 crore today, up from Rs 66 crore five years ago. This means that over seven crore liquid-litres of oranges, apples, grapes and guavas went gushing down our gullets between April 2002 and March 2003. And these are conservative estimates, with one litre juice priced at Rs 60.

But, what's really tempting us to tank up on fruit fearlessly, without worrying about cholera and gastro? It's the global hygiene standards followed by juice majors like Dabur's Real and Pepsi's Tropicana, leaders in the Rs 150-crore pure juice segment. Says Amit Burman, executive director, Dabur: "When we launched Real in 1996, tinned juice loaded with sugar and preservatives were the only thing available in India. 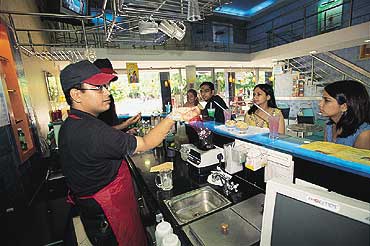 FIRE AND ICE: At Amoretto's, the exotic finds favour

With tetrapak technology, we have been able to provide 100 per cent preservative-free juice." Last fiscal, Dabur earned Rs 60 crore on Real and Real Active (the sugar-free, pure juice drink preferred by adults). At Pepsi, Shubroto Chattopadhyay, ED, new business, says: "People have taken to Trop because it's sheer goodness, packed as it is with vitamins and calcium.And this summer, the smaller 200 ml pack (compared to the one litre pack) has grown way beyond our expectations."

Market realities aside, true life stories of people who have drunk their way to wellness are even more compelling. Devika Bhojwani, 50, an event management consultant in Mumbai, was diagnosed with breast cancer two years ago. Her naturopath recommended juice therapy. "Radiation created a lot of dead cells and burns, but by applying aloe vera juice to my skin I don't have a single burn mark left on my body today," says Bhojwani. Besides, she also drank vast quantities of lycopene-rich red and green juices to keep her energy levels high. "Juice is immensely powerful therapy," she says.

Indications of such well-being are pouring in from every direction. Faridabad-based Richa Lahiri, 28, has been a chronic asthma sufferer. "Every March when the pollen counts rose, I went through hell. But last year, a home remedy, tomato and celery juice, helped stave off the attacks," says Richa. "Everyone loves our carrot, tomato, beet, ginger and lime special, because it makes the skin glow," says Himanshu Kapoor, dietician at J Wellness Centre, Delhi.

No wonder new-age juice bars are springing up everywhere. The Fruit Shop in Chennai, selling exotic concoctions made with kiwi, strawberries, cherries and litchis, has locals flocking to all its six outlets. The Health Source in Mumbai, opened just a year ago, already has plenty of juice-addicts as regulars. Amoretto's has eight outlets in Mumbai, Delhi and Calcutta with another 21 planned by December.

"The time was ripe for a healthy hangout," says MD Jayant Kochar, who's poured Rs 7 crore into his juice bars. Their super-sterile standards make it possible for American desis to walk in confidently and drink chikoo aka naseberry juice, and then e-mail mum back home about 'the awesome drink'. Amoretto's have also introduced smoothies; a fruit, milk and ice drink that's popular back in the US, but still to find its feet in India.

Capitalising on the traditional Indian belief that "juice se taakat aati hai", Amoretto's and Tropical Smoothie have stolen a march over most local parlours by blending new-age health ingredients like wheatgrass and spirulina into their drinks. Wheatgrass juice is a chlorophyll-rich miracle food which neutralises body toxins, reduces high BP and improves digestion. Spirulina, a 3.5 million-year-old algae, is hailed for its ability to boost immunity to cleanse the inner body. But Shikha Sharma imposes a juicerati code of conduct: "The best time to drink juice is in the morning on an empty stomach (one-and-a-half hours before breakfast) or five hours after a meal, when it is easier for it to move through the digestive system."

Feeling the pulse of the market, high-energy fitness centres like Gold's Gym in Mumbai, Ozone and J Wellness Centre in Delhi and Talwarkar's branches in Bangalore have opened up cafes serving fruity swirls and muscle-friendly drinks. And while flab fighters at Gold's are fortifying themselves with orange-and-carrot Beta Squeeze, body sculptors at Ozone are knocking back spinach-and-lime Popeye Shots. Says Jasmine Arethna, V-P, Ozone, "We offer juice as five-star health food with all your vitamins intact." Says Leena Mogre, COO, Gold's Gym, "Everyone needs a boost, before and after workouts, so we decided to sell pure-energy blends."

While Pepsi and Dabur are sourcing mangoes, grapes, litchis and guavas from India, the majority of their frozen concentrate oranges, apples, tomatoes and pineapples is imported. "Our only hope is the desi Malta orange for concentrate, but till production is standardised, it'll be some time before we can use it," says Amit Burman.

The uncomfortable irony here is that India produces 47 million tonnes of fruit.And the commonly held belief is that the amount that rots in India is what the whole of Europe consumes. But all this could change. Says Pepsi's Chattopadhyay, "Our dream is to make India an international source for juice." Besides guavas, litchis and pomegranates, they also have plans for farming juice-worthy oranges in Punjab and apples in Kashmir. At Amoretto's, Jayant Kochar says, "Our biggest challenge is to make safe sugarcane juice by next summer, finding ways of crushing it hygienically." Not just Kochar though, there's many of us, holding out our glasses, ready and waiting for another round of ambrosia.

Pramila N. Phatarphekar with Vaishna Roy in Chennai and Archana Rai in Bangalore