His attitude is part Vicky Donor, part Punter. Are we looking at the future? 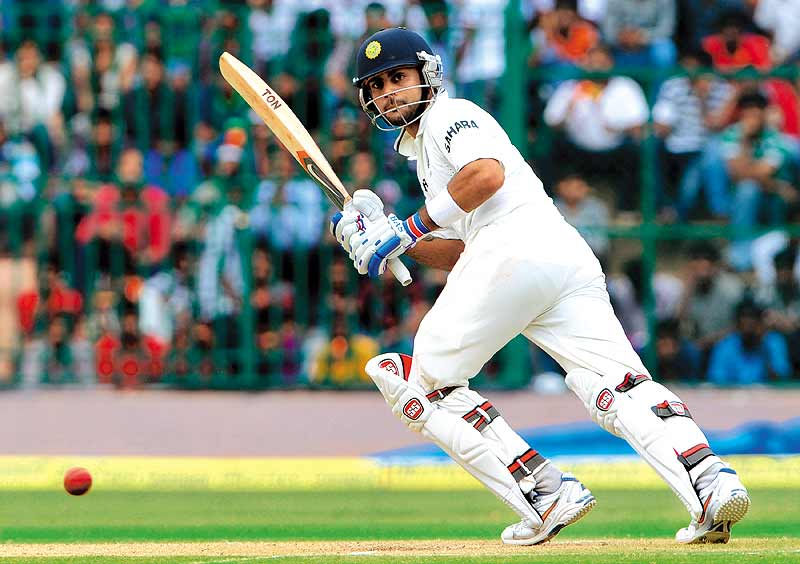 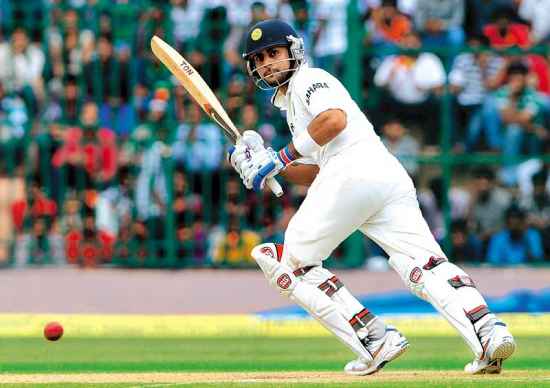 Kaptaan Kohli?
What Virat has going for him

It’s a pleasant afternoon practice session at the Chinnaswamy stadium in Bangalore. The season: June 2006. Some of Indian cricket’s brightest talents are going through their paces under the eagle eyes of coach Lalchand Rajput. As a former Mumbai opener, Rajput has played plenty of cricket with Sunil Gavaskar; he was captain of the Ranji team when Sachin Tendulkar made his debut. So, he has, as they say, seen a couple of guys who could bat the leather off the ball. A coach usually avoids singling out a ward for special mention. However, that day Rajput couldn’t help asking reporters: “You must have seen Virat? A great talent!”

Six years later, last week, that “great talent”—Virat Kohli to give his full name—was the lone diamond sparkling in the rubble left behind by India’s exit from the Twenty20 World Cup in Sri Lanka. Named the ODI cricketer of the year just a fortnight earlier, Kohli drew oohs and aahs with his strokeplay in the game’s shortest version. Suddenly, from Pallekelle to Paschim Vihar, questions were being asked: are we looking at the next big thing in batting now that Sachin too has indicated he’s on his way out? And hey, could the boy who captained India to an Under-19 World Cup title not be M.S Dhoni’s replacement if push comes to shove before 2015? The safe answer for the first query is, “Perhaps, but it’s too early to say.” The not-so-safe answer for the second: “Oh yeah.”

By the time he turned 24, Sachin had already been on the international circuit for seven years, with 11 centuries under his belt in 52 Tests; ‘Cheeku’, as Kohli, 24 next month, is called by close pals, has a measly two. After 10 Tests, there is little to separate Kohli’s 703 runs with Dravid’s 773 though. Some are surer. “He’ll be No. 1 in times to come. In a year or two, he’ll be treated on a par with Gavaskar, Sachin and Kapil Dev,” says ex-captain Ajit Wadekar. “We thought there would be a big void after Dravid and Laxman, but Kohli seems to be fitting perfectly in their shoes.”

“I had said a year-and-a-half ago that Kohli was made for captaincy. And he doesn’t have to change his personality for it.”
Ravi Shastri, Ex-India captain

Comparisons are odious but there’s no denying that he’s stolen a march over his peers and compatriots like Suresh Raina, S. Badrinath, Rohit Sharma and Cheteshwar Pujara. In his last nine ODIs, Kohli has scored a record five hundreds and one fifty; in his last six Test innings he has scored two 100s and three 50s. Kohli is in the form of his life, or as they say, in his zone. “If you look at his batting closely, he’s playing ‘closest to his eyes’. It’s not easy. He doesn’t try to reach out to the ball. Some of his shot selection is incredible, like the one he played against Stuart Broad in the T20 World Cup. When exceptional ability is backed by equally complementary confidence, you see these mesmerising shots,” says team-mate Irfan Pathan. As Siddharth Monga, assistant editor at Cricinfo, puts it: “Kohli has probably done all you can ask of a 23-year-old playing top-level cricket in a billion-strong, single-sport country. He has the technique, he has got the runs, and he has surprised everyone with his temperament, in how much he has matured from the brash kid you first saw. However, when you talk of filling the void, his big test will arrive when India start touring away, from December 2013 onwards. There is nothing to suggest he can’t succeed in Tests in South Africa, England and Australia...but in actually doing it only will he fulfil the expectations he’s generated.” 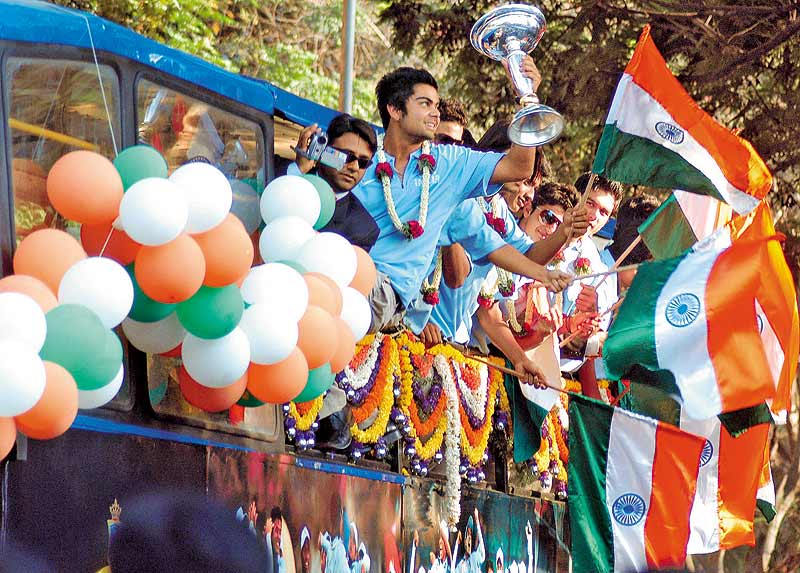 Unlike the Fab Four who earned their spurs when the big stars were still blazing and brought a certain certitude to the crease—and like Zubin Mehta who by his own admission managed to conduct the world’s great orchestras because the designated conductor couldn’t be around—Kohli’s initial career was aided by the fact that the Boys in Blue had some ageing, injury-prone warhorses. His ODI debut in Sri Lanka in ’08 happened because Sachin and Sehwag were injured. He came back the next year because Yuvraj was missing. He got a chance in Bangladesh in 2010 because Sachin was, er... rested. He was named vice-captain because the established, big players skipped a tri-series tournament. He was in the Test side because, well, Gambhir wasn’t well.

It may be a lucky streak but you still have to grab the opportunities you get—in cricketspeak, it’s a juicy half-volley, but it still has to be hit for a boundary. So far Viru-II hasn’t missed many of those; in fact, many would aver, he is Viru-I plus technique. Says former left-arm spinner Maninder Singh: “I have always felt he is a better version of Sehwag. He can score at Sehwag’s pace, and has a superior batting technique.” Adds ex-skipper Dilip Vengsarkar, who first selected Kohli in ’08: “He’s improving with each outing. He is young but already very experienced and he has scored against almost all countries.”

“Some of his shot selection is incredible. When exceptional ability is backed by confidence, you see these mesmerising shots.”
Irfan Pathan, Fast-medium Bowler

Where the Kohli script changes from the Fab Four’s is in the attitude, the aggro, the aspiration; the can-do. After every single, Laxman religiously tapped the crease four times and silently gestured to The Great Coach upstairs on reaching the other end safely; Kohli is more likely to look his nearest rival in the eye and plunge into the choicest cusswords. Agrees Sourav Ganguly: “In world cricket, talent alone isn’t enough. Temperament is key...and what a fantastic temperament this boy has.” The remark shows how far Kohli has come, for just a few months ago, it was his attitude that made all the news—Page 3 onwards. His tattoos, his gelled and spiked hair, those IPL parties were threatening to become bigger than his game.

It grew really shrill during the Australia tour early this year. Recalled to England as cover for Yuvraj, Kohli did just well enough to merit a place for Australia where the chin music came from spectators. Dravid and Laxman wouldn’t be caught dead outside the match referee’s room, but in Sydney in January, Kohli pleaded guilty before Ranjan Madugalle after he’d been caught showing the finger to the crowd. Kohli tweeted: “I agree cricketers don’t have to retaliate. what when the crowd says the worst things about your mother and sister. the worst ive heard”. 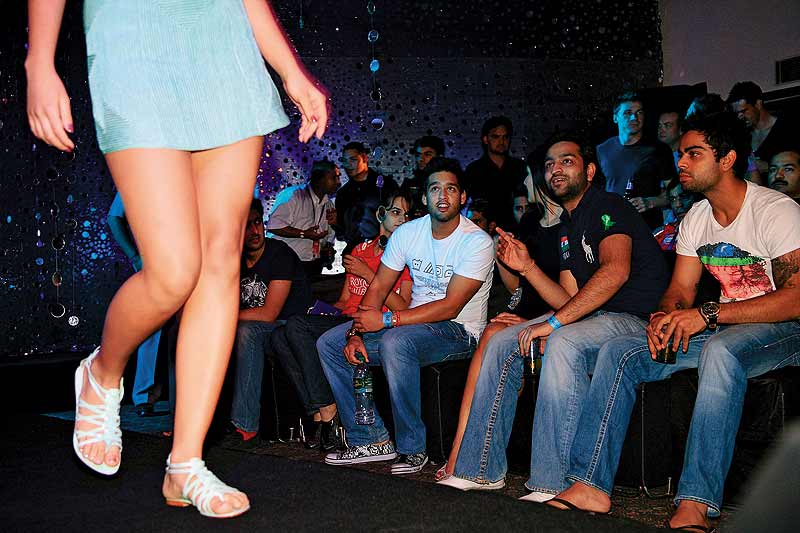 Kohli with Siddharth Mallya at an IPL after-party show, 2010. (Photograph by Getty Images, From Outlook 15 October 2012))

Ironically, fans love him for just this aggro, this bluntness, reflecting the edginess that fist-pumping and war-paint-donning fans have brought to the modern game. “I love Virat’s go-getting attitude,” says Akash Gulati, an ardent fan in Delhi. “We all work hard and party hard. So does he.” But Virat has been careful to shed his bad-boy image quickly. He knows he retains his fans only as long as he plays well. So despite being noticed for his attitude, he was the only Indian batsman who stood up to the Aussies in the series that India lost 4-0. “The innings in Australia gave me a huge amount of confidence. Critics had questioned my technique and temperament for Tests, so it was very satisfying after the Adelaide (where he scored 116) and Perth (75 runs) knocks. The hundred at Hobart (in a one-day game against Sri Lanka) was the icing on the cake,” says Kohli. This determination hasn’t been lost on the greats of the game. Dravid’s wholehearted praise (“Kohli is currently the best Indian batsman across formats”) pleased the youngster immensely. “Dravid’s praise means the world to me. Coming from someone like Rahul bhai, it’s a great honour,” says Kohli.

“The world does see Virat as the next big star. He is dynamic in all forms of the game. Now it’s up to him to acquire an aura, like a Tendulkar or Lara,” says former West Indian opener Phil Simmons, currently Ireland’s coach. Ganguly, though, says comparisons with Sachin are not on, for the moment anyway: “I won’t compare him or anyone with Sachin. It’s not about 1-2 years but more than two decades of the consistency Kohli is showing today...that’s how you become a Tendulkar.”

Sanjay Manjrekar emphatically states that he hasn’t seen anyone as talented as Tendulkar, but admits Kohli has some remarkable similarities. “Even in Ranji matches, Sachin would respect the bowler in his early overs no matter how many runs he had got in his last innings or what kind of touch he was in. Kohli does the same, it’s a wonderful quality,” Manjrekar told CNN-IBN. “If Kohli can play for 15 more years, he can be considered with the Big Four of Indian batsmen who have either just retired or are on the verge of it. Just one good summer is not enough,” says former Australian bowler Craig McDermott.

Kohli has only played 10 Tests—even in this blitzkrieg of T20 games, it is still the true arena where a player earns his spurs. And he knows this. “Well, I can’t speak for others but personally nothing motivates me more than doing well and carving a niche in the ultimate form of the game,” he says. “ipl is just a few weeks’ tournament and ultimately people remember you for your Test match performances.” His Test baptism didn’t begin too well. When he became the first member of the World Cup-winning 2008 Under-19 squad to get a Test call (Abhinav Mukund is the only other), Kohli thought he had it all mapped out, till Fidel Edwards bounced him out in the Caribbean. But the Australian tour showed that he is a quick learner and is ready to face the best bowling attacks on their home turfs.

But not many seem to be willing to wait too long—right from cricket commentators, his many fans and going by the reported utterances of outgoing chief selector K. Srikkanth, even the BCCI—for the skipper’s cap to be handed over to Virat Kohli. “I had said a year-and-a-half ago that Kohli was made for captaincy,” says former captain and commentator Ravi Shastri. He says it’s a good decision that they have already started grooming him. “That said, I think Kohli, or for that matter any player, should not and does not have to change his personality for captaincy,” he says.

But others warn that captaincy at this juncture may be too much too soon. Wadekar—who does believe that Kohli has it in him to be the next Dravid or Laxman—is among those who feels it’s too early. “If India is looking ahead for 10 years or so, it’s the right time to groom him,” says ex-India wicket-keeper Chandrakant Pandit, also advocating caution. “In our culture, experience counts, but if you are looking at several years from now, one may wonder how many of the seniors will be around. Dhoni is doing a great job, assisting him would be good for Kohli.” It’s that against the impatience of the young.

Tour saw him rise as India’s Mr Dependable, only batter to score a 100 in both Tests, ODIs

The only player to be retained by his IPL team Royal Challengers. Was their second highest run-getter, after Gayle.

By Vimal Kumar in Colombo and Prachi Pinglay-Plumber in Mumbai