Spring Of The Patriarch

Don't be fooled by this image of repose. At 92, India's grand old sardar is not retiring yet. 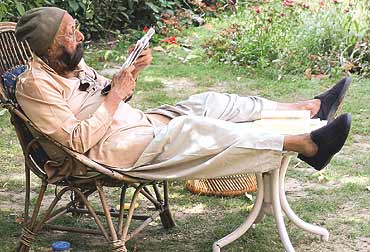 "It's my harvest year," says Khushwant of the Padma Vibhushan and other awards or recognitions he has got this year.
***
Which other writer would walk into the butcher's and expect to be told, "We read you every week, in the Urdu papers"?
***
The golden Padma Vibhushan has fast been tucked out of sight. On display is a solid silver loon, given to him by Canadian Punjabis.
***
Khushwant Singh begins his day by chanting Om. "It's not prayer," he says. "It's really to get my bowels and bladder to work."
***
He knows how to reach his reader: inform, amuse and provoke. "Indians are easy to shock. They are hidebound in religion."
***
His visitors include politicians, pundits, publishers and, lately, sightseers. "After Qutub Minar, Jantar Mantar, they want to see me."
***
Recently, a disciple of Dalai Lama tied a red thread on his wrist, "for peaceful death". "Wish it was for immortality," guffawed Singh.

At 92, India's Dirty Old Man and self-proclaimed joker is entering a new phase of his life. Last week, at a glittering ceremony he had been reluctantly dragged to at Rashtrapati Bhavan, President A.P.J. Abdul Kalam came down the podium to give him the highest national award for a writer so far, the Padma Vibhushan. "It's my harvest year," says Khushwant, almost gleeful at the national and international awards that are flowing in thick and fast. For him, the recognition is a sign that he was right all long: that you can write about farting and fornicating on the same page as an Adi Shankara verse or an Urdu couplet, that it is possible to be scholarly without being solemn.

But ask him how many awards he's received in this year alone, and he scowls: "You are making me boast. It's vulgar." The writer who has avidly courted abuse for almost half a century for vulgarity has his own notions on what is vulgar. The golden Padma Vibhushan medal has long been tucked out of sight in a bedroom drawer, joining the other awards. Only a solid silver loon, presented a couple of months ago by the Canadian Punjabi Association, still reigns, perched over a stack of recently arrived coffeetablers. "I've grown fond of that loon," he says. It's been useful, the perfect ice-breaker at his evening 'mehfils': "You see that bird on the table? Do you know it is Canada's national bird?"

Popularity he has always had, the kind that writers dream of. Successive presidents, prime ministers, Nobel laureates, cabinet ministers, ambassadors, Booker-winners, foreign journalists, aspiring writers, film stars and pretty girls in search of instant fame have all rung his doorbell at some time or the other for over 40 years. Hanging over the doorbell, incidentally, is the legendary board that has travelled with him since his paying guest days in Bombay. It says: 'Please don't ring the bell unless you are expected'.

He has something else no other writer can boast of: a dedicated readership among the less erudite. One evening, for instance, on a rare visit to Khan Market, Khushwant strayed into a butcher's shop out of curiosity. Butchers rose, awe-struck, knives paused over wooden blocks, as India's oldest—and best-known—celebrity writer entered to peer at the Quranic verses on the tiled walls. "We read you every week in the Urdu papers," one of them ventured to say. Then there are the letters—hundreds of them every month—from readers across India, from small towns and big cities, from India and abroad, from schoolboys and pensioners. And people still stop him when he ventures out, leaning out of their cars to say, "I read you last week, ha, ha!" Or "Let's hear a joke from you."

There's a price, of course, for such popularity: a killing schedule, even at 92. The sanyas which he famously declared for himself a couple of years ago has not changed his working style. In fact, it has only tightened his schedule. To keep pace with his nightmarish deadlines—two weekly columns, besides a book or two (this year it's three)—he's up at 4 am. In the privacy of the dark, he begins his first ritual, something he rarely confesses to: he closes his eyes and breathes in and out, chanting Om Arogyam. "It's not really prayer," he protests. "It's really to get my bowels and bladder to work." The chant is then followed by the Gayatri mantra. "It's stuck in my head ever since I translated it a few months ago." Even with his fierce godlessness, Khushwant admits there's no better way of starting his day than this Vedic hymn in praise of the sun, a celebration of nature and life. There is other poetry, too, that rises unbidden at this hour: Ghalib, Iqbal, Shakespeare, limericks, a joyous mix of the ribald and sublime. Verses he makes no effort to memorise, "just stuck in my head", the product of a long life spent in celebrating the written word.

The day's "battle" with his bowels won, he sits down to the real business of the day: "scribbling", on a yellow legal notepad. It lies always close at hand, next to the armchair, a grim reminder of Lachman Das, his "slave-driver" secretary. Younger than Khushwant but with his knees already giving way, Das is the other half of this remarkable writing industry. His job for close to 40 years has been to collect the sheets of crabbed handwriting when it's done, type it out and push it into dozens of brown paper envelopes. They will be collected later in the day by 12 English dailies and 15 language ones across the country. "It's a killing pace," admits Khushwant, "I work like a horse and yet don't get paid as much as all these bloody editors." 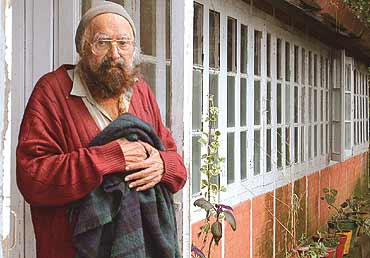 But grumbling apart, he wouldn't have it any other way. He has by now perfected the art of reaching his reader. That old formula he coined so many years ago—provoke, amuse, inform—still works, he says. "It's very easy to shock Indians, they are hidebound in religion." He translates from the Vedas, or from Adi Shankara, as he did recently, resulting in a deluge of letters. He uses Hindi and Urdu couplets liberally instead of English verse because he knows what connects. He takes the badly written jokes they send him, rewrites and polishes, and publishes them under their names. And, in return, they love him, abuse him, pester to meet him, bring him their manuscripts, children and bottles of his favourite Scotch whisky.

By 6 am, the butler, trained into clockwork punctuality by his otherwise easygoing employer, arrives with the day's armload of six newspapers. For all his impatient waiting, the papers are a daily disappointment. "Nothing there, just pulp." Duty done, Khushwant then turns to his daily vice: crossword puzzles. It's a guilty pleasure, he confesses, "such a waste of time". By the time his breakfast is served—a slice of toasted brown bread and a mug of coffee—he's worked through five or six of them, keeping his favourite, The Statesman, till the last.

But by 8 am, the stern taskmaster in him has brought the truant schoolboy to heel. He's back to work, feet up on the upturned modha, legal pad in lap. His pen moves with practised ease, rarely pausing to delete or rewrite. "I can't afford the luxury of writer's block," he laughs. Lachman Das is hovering.

Five minutes to noon, the table is being set for his frugal lunch: soup and sprouts salad, perhaps, or ready mix bhelpuri, a current favourite. Twice a week, in a tradition that's continuing over two generations, an admirer brings freshly made dahi vada. He may have given up other pleasures of the world—travelling, his daily game of tennis, visits to parks and bookshops. But when it comes to food, he's the old Khushwant: curious, adventurous, ever willing to try anything once. Many an evening, one finds him poring over his sheaf of menu cards, pondering what to order for dinner.

By 12.30 pm, a hush descends on Apartment No. 49 E at Sujan Singh Park: India's most prolix writer is having his richly deserved siesta, yet another tradition that's never been broken in half a century. He's up in an hour, in time to read the day's mail. Sunk deep into his armchair, looking like a latter-day Gandhi, he begins answering the letters, two or three indecipherable lines, handwritten on postcards. The letters of flattery go into the bin, the letters of abuse, sometimes 17 sheets long, are carefully folded into his black diary, as if they were prizes. His labour is relieved only by the strains of Western classical music pouring out from his satellite radio set, a recent passion. 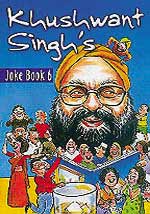 It's approaching the magic hour, 7 pm. Visitors are beginning to pour in, a random mix of tycoons, bhikshus, maulanas, pandits, politicians, padres, scribes, publishers, hopefuls and, increasingly, sightseers. "After seeing the Jantar Mantar and Qutub Minar, they want to see me," he says, a trifle ruefully. But it's more than that. His unique brand of understated goodness and exaggerated gallantry ("I like to compliment all women on their looks. It makes them happy, it makes me happy"); his quixotic loyalties ("I have to stand by anyone if he's run into bad times"); his unspoken creed ("I like my friends to drop me, not the other way round") have all ensured him a fortune in friends as large as what he has made out of his writing career—his joke books alone, he loves to say, fetch him a royalty of Rs 1 lakh a year.

Last week, there was a disciple of the Dalai Lama among the visitors. She wound a red thread on his unresisting wrist. "This has been blessed by the Dalai Lama," she said, "for a peaceful death." Afterwards, he stealthily untied the thread and slipped it into his pocket. He brandishes it around now before his speechless audience. Then he guffaws: "I wish it was for immortality instead of a peaceful death."

It's not that he hasn't thought of it. He's been obsessed with death since his 20s, and now the time is coming close to meeting his 'Bade Miyan in the Sky', he's stoical. It's just that he wants to do it his way: tidily, without fuss. "I hope my time doesn't come up before I finish saying what I have to say." Which is why when he had a recent brush with his Bade Miyan—crashing down on the floor in an unaccountable fainting fit—he gave Him a piece of his mind as he struggled back to his feet. In verse, from Iqbal: Why did you order me out of Paradise/I have a lot to do in the world./Now you wait for me."

"He Had A Vision For Team India"