Spring Is Nigh In Nepal

With universal disapproval, how long will Gyanendra's chairmanship last? Updates 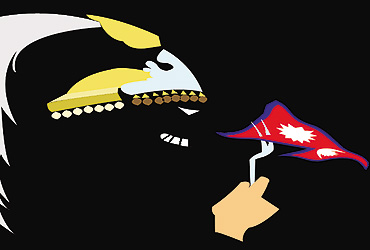 outlookindia.com
-0001-11-30T00:00:00+05:53
It has been a year since the king of Nepal descended from the throne and pedestal and proclaimed himself chairman of council of ministers. On February 1, 2005, Gyanendra Bir Bickram Shah Dev conducted a coup d'etat with the support of the Royal Nepal Army, and began illegal, unconstitutional, unprincipled direct rule. And yet, many had nurtured the hope that the royal personage had a plan, either to motivate the military as its 'supreme commander-in-chief', or to cut a deal with the Maoists to usher in a lasting peace.

It turned out that the chairman had no plan, no strategy; only a hankering for absolute power not sanctioned by the 1990 Constitution, a document that reserved sovereignty for the people. Before long, it also became apparent that the chairman was not a capable administrator, nor a political leader. All of this would have been merely poignant had the royal takeover not added immeasurably to the miseries of 26 million citizens.

On Wednesday, February 1, 2006, the chairman gave a televised address to the nation. Using the royal 'we', he misrepresented the national condition before the citizens—claiming that the insurgency was weakened (even as gunfire resounded across the hills), that there was fiscal discipline and decentralisation (as he centralised power in his hands and did away with the need for national audits), that corruption was down, and that Nepal's prestige was rescued. He reiterated his commitment to multi-party democracy, even as he herded hundreds of national and district-level politicians and civil society leaders into detention.

The Maobaadi had already brutalised the population with their decade-long 'people's war', and it did not require a king-who-would-be-chairman to further debilitate the nation. The unkindest cut has been the misuse of the military to do the royal bidding. As a result, the regime has militarised state and society. The army officers have become de facto administrators throughout the country, and the bureaucracy and police force reduced to sullen onlookers. This deployment of the army against democracy has bottled up the people's anger, reduced avenues of protest, and created conditions for a confrontation between the palace and the people.

Chairman Gyanendra and his military advisors would clearly like to impose the Pakistan model on Nepal, with an all-powerful army also engaged in all manner of non-military activities. This alone is reason to pull out all stops to hasten the return to democracy, with the motivating power of the Nepali public and the support of the international community and neighbouring countries. Fortunately, unlike at points in the past, Indian diplomacy today sees political stability as feasible only under a democratic dispensation. For a year now, New Delhi has been loudly, consistently in favour of the Nepali people vis-a-vis the monarchy. Even standoffish Beijing has lately indicated that it would wish the chairman backed down.

Isolated both within the country and outside, the regime is bound to collapse under the weight of near-universal disapproval. Given this certainty, it is time for Nepal's political forces, civil society and the world community to start planning for that collapse, in order to have plans in place to prevent anarchy. Thereafter, it will be important to prepare for national reconstruction and rehabilitation.

The obduracy of Chairman Gyanendra is the major stumbling block for the peace that would lead to reconstruction. The Maobaadi rebels, having lost significant support through their violent agenda and seeing the impossibility of state takeover through power of the gun, have given credible indication of seeking a 'safe landing'. For this reason, they implemented a four-month ceasefire in September 2005 to which the royal regime did not respond, but which nevertheless helped to salvage some of the rebels' lost political visage.

Even while the rank and file are spoiling for a fight, the rebel leadership has in principle abandoned its 'people's war'. At a plenum meeting in late 2005, Maoist chieftain Pushpa Kamal Dahal ('Prachanda') and his commanders decided to accept the multi-party system of government as inevitable. This was a dramatic turnaround for a force that stood so vehemently for the 'dictatorship of the proletariat', and may have given pause to some armchair supporters in India and elsewhere who have applauded the remote 'revolution'. But the fact is that the Maoists have climbed down in principle, and the political parties of Nepal are willing to provide them with the space and understanding to help them enter the mainstream sans arms. The people now watch intently to see how the rebel leadership will convince the cadre to lay down the gun.

As far as the chairman is concerned, the people of Nepal have tried democracy and liked the taste. They will have it back, with the goal of undoing each and every action, order and ordinance pushed through by the royal regime over the past year. Whether or not the kingship remains is up to the people of Nepal, but the army must be made accountable to the government of the day. The generals must submit to civilian rule, for it is from them that the royal palace now takes all its strength.

The defeat of the monarch's autocratic ambitions is certain and the public simply awaits the endgame. The Kathmandu Spring of 1990 saw people's power overthrow King Birendra's autocratic rule. Today his brother, a latecomer to the throne, wants to take the country back up the path already abandoned. He just does not understand. The success of the Kathmandu Spring of 2006 is certain.

(The writer is editor of Himal Southasian magazine.)