Is it the ‘statesman’ of this picture or the one who prefers tough talk over dialogue? 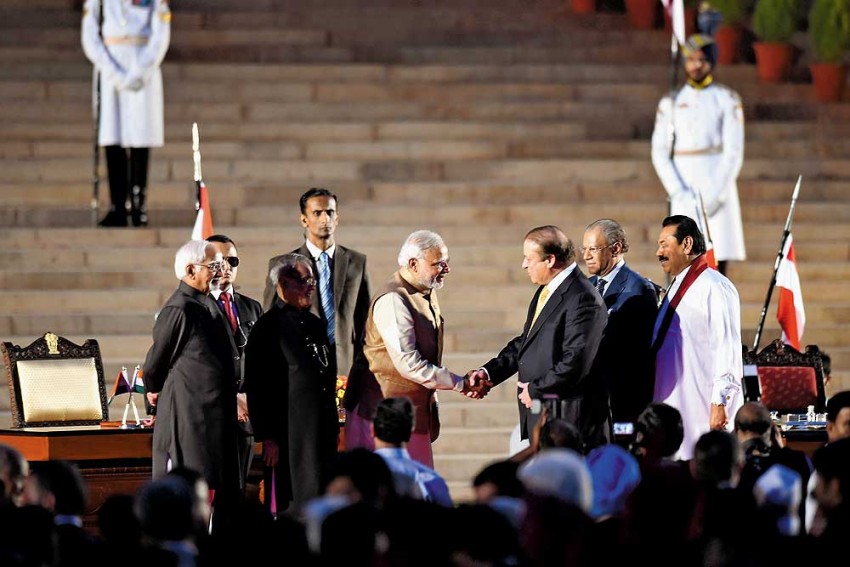 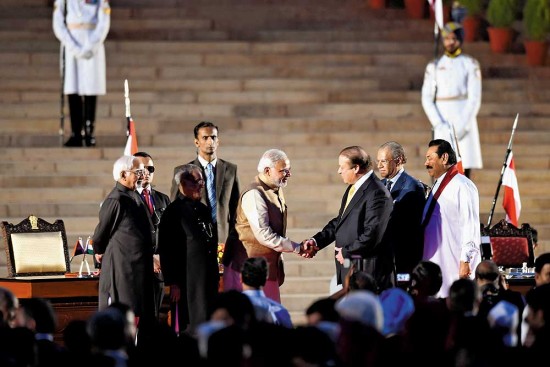 Pak dignitaries have long met Hurriyat leaders on their visits

Precedent plays an important part in the conduct of relations between countries, especially if they are estranged nuclear neighbours like India and Pakistan, with the thorny issue of Kashmir thrown in. It has been a practice for some years now of official guests from Pakistan to meet Kashmiri  separatist leaders. Farooq Leghari did so as Pakistan president in 1995, and it became almost a regular feature on the agenda of visiting Pakistani dignitaries ever since Atal Behari Vaj­payee invited Pervez Musharraf for the Agra Summit in 2001 (see Parley Vous). The UPA government too seemed fine with the arrangement, the diplomatic and political logic being that it would keep the Kashmiri hardliners happy, and at the same time allow Pakistani leaders to earn some brownie points with their constituents back home.

It was a marked departure, therefore, when the Narendra Modi government asked the Pakistan high commissioner in Delhi not to go ahead with his scheduled meetings with leaders of the All Parties Hurriyat Conference, and called off the August 25 foreign secretary-level talks in Islamabad when Abdul Basit refused to comply. The turn of events seemed especially baffling as Modi had just a few months earlier—in May—pulled off a coup of sorts by inviting Nawaz Sharif for his inauguration ceremony.

South Block says that Nawaz Sharif’s weakening position at home does not make him the best bet for what India wants.

Of course, the cancellation of talks couldn’t have come at a worse time for Sharif himself, besieged as he is by the joint forces of Imran Khan’s Pakistan Tehreek-e-Insaaf and Canadian ‘padri’ Tahirul Qadri’s Pakistan Awami Tehreek, with the army pulling some deft strings (see Age of Extremes). There are enough people who are attributing Basit’s ‘cussedness’ to the larger attempt to deflect attention from events back home. However, even for Modi, the question being asked is whether it’s such a wise decision to put the strain back in India-Pakistan relations when he had so obviously reached out to our South Asian neighbours when he took over as the prime minister of the country.

South Block officials, however, say that even in May, when preparations were being made for the swearing-in, it had been communicated informally to Sharif that it would be nice if he did not meet Hurriyat leaders, and Sharif had apparently respected India’s request. Former Indian diplomat Vivek Katju goes to the extent of saying the decision was long overdue. “It is a course correction for normal, diplomatic conduct,” he says.Former Indian deputy national security advisor Leela Ponappa takes a similar stand, saying, “India had been following a wrong policy all these years. It did not need to be continued because it was in practice for the last 14 years.”

“It was a decision that was long overdue anyway. It is only a course correction for normal, diplomatic conduct.”
Vivek Katju, Former Indian diplomat

However, former minorities commission chairperson Wajahat Habibullah, who has also served in Jammu and Kashmir, says there are advantages to Pakistani leaders meeting Hurriyat representatives, which will now be lost. For instance, he points out that the series of engagements they had with Pakistan perhaps made the Hurriyat leaders realise what the neighbouring country was about. This may have played a crucial role in their then decision to modify their demand of separation from the Indian Union to seeking more autonomy for Kashmir within India, he believes.

There were other critics. Hardline Hurriyat leader Syed Ali Shah Geelani said a meeting such as this was not a “genuine reason” to cancel talks; his moderate counterpart Mirwaiz Umer Farooq called the decision “very, very unfortunate”. PDP leader Mehbooba Mufti too called it “an immature reaction”. The Congress, with no stakes now, said it was “kneejerk policy” to have invited Sharif anyway. In the US, a State Department spokesperson said, “It is unfortunate that planned talks between India and Pakistan have fallen through.”

To the world at large, Modi’s move exposes the fragility of India’s neighbourhood policy under a “tough” leader, especially one who can break precedent and unilaterally set new terms and templates for future engagements with South Asian nations. The BJP alone chee­red their strongman, saying the party “welcomed the decision”. “Though India wants good relations with its neighbours, it will not tolerate any interference in its internal affairs by anyone,” its national secretary Shrikant Sharma declared.

“India has been following a wrong policy all these years. It did not need to be continued because it was in practice for the last 14 yrs.”
Leela Ponappa, Former Indian deputy NSA

“Interference in internal affairs”. That is what is being cited as the reason for cancellation of talks, indicative of New Delhi’s desire to keep the Kashmir issue within a strictly bilateral framework. Other dynamics too have changed meanwhile, notably within Pakistan, with Sharif’s position weakening in his own country. So even though he may remain “committed to peace”, New Delhi is wondering if he continues to be the best man to deliver what India wants. The view, in fact, gained ground soon after the Modi-Sharif meet in May, when India suggested steps to yield low-hanging fruit in terms of bilateral trade between the two sides. “These were not even demands seeking most favoured nation status for India, they were demands of making the entry of goods into Pakistan through Wagah at par with those through Kara­chi,” says a senior MEA official. “But even there we found the Sharif government dragging its feet.”

“Asking its high commissioner to desist from meeting the Hurriyat leaders was definitely within the control of the civilian government,” the mandarins at South Block argue. Not doing so has cast suspicion over Pakistan’s intention and seriousness to improve relations with India. “We did not call off talks when there was an increase in LoC firing or when Pakistani leaders decided to raise the issue of Kashmir on August 14, their independence day,” they say.

“Indian leaders too should meet Hurriyat and other leaders regularly to help improve the situation in the state.”
Wajahat Habibullah, Ex-minority commission chairman

However, India’s desire to raise its stakes with the present Pakistani regime has receded even more after the fast-paced domestic developments in Pakistan, and Sharif being asked to yield more space to the army for his own survival.

However, many in India see the argument as retrospective justification for Modi’s decision. They wonder if this is the trajectory the government will follow from now on, what will it do if there is a terror attack in India by terrorist elements in Pakistan? By forcing India-Pak­istan relations into a cul de sac, squeezing room to resolve differences through negotiation, is the BJP-led regime leading India on a confrontational path with Pakistan? Were it to happen, not only will it be a setback for ties bet­ween the two neighbours, it will also stymie peace, development and stability in South Asia. Perhaps why the Indian and Pakistani leadership needs to find a way, sooner rather than later, to renew their engagement to normalise ties and take them forward. Given the mood both in Delhi and in Islamabad, that seems more like wishful thinking than any measured ass­essment of ground reality, condemning Indo-Pak ties to another long hiatus.