Virat Kohli may be the world's No. 1 batsman but Rohit Sharma has been more consistent with bat than his captain in recent times and that includes the 2019 Cricket World Cup 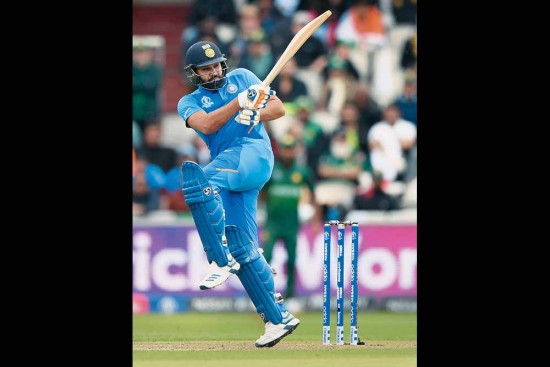 When Rohit Sharma walked out to open the innings against Pakistan in the World Cup on June 16 at Old Trafford, Manchester, it is quite possible that his mind travelled back to his three-ball duck against the same opponents in the 2017 Champions Trophy final. Quite possibly, his 20-ball 15 against Pakistan at the 2015 World Cup in Adelaide rankled too. Amends had to be made for both ‘failures’.

In sublime form, Rohit compensated in a bravura style he has made his own. The 32-year-old proved once again—if proof was required—his imperious mastery of ODI batsmanship, inhabiting the rank of the world No.2 ODI batsman with cool assurance. On a scoreboard recording India’s comprehensive 89-run win over Pakistan, his 113-ball 140 sparkles the brightest. Earlier in this World Cup, he had hammered, nay laced, 122 not out against South Africa and 57 against defending champions Australia. Rohit was in form, but needed to stamp his authority over Pakistan. In the event, a couple of run out chances rose up as mirages, tantalising the hapless Paki­sta­nis, then they were blanked out by Rohit’s unremitting brilliance, till he gave his wicket up.

Rohit is often compared to Virat Kohli in terms of consistency. Kohli may be the world No.1 ODI batsman, but Rohit the opener has lately been more consistent than his captain, as his last 12 innings testify: 87, 62, 7, 2, 37, 0, 14, 95, 56, 122 not out, 57, and 140. The India vice-captain’s impactful run in the World Cup is indeed staggering: 319 runs, including two centuries, in three innings, with the New Zealand match being a lost opportunity to score more.