Home  »  Magazine  »  Sports  » News/Kashmir »  Weeping Willow: Why Kashmir's Bat-Making Industry Has Been Hit For A Six

Weeping Willow: Why Kashmir's Bat-Making Industry Has Been Hit For A Six 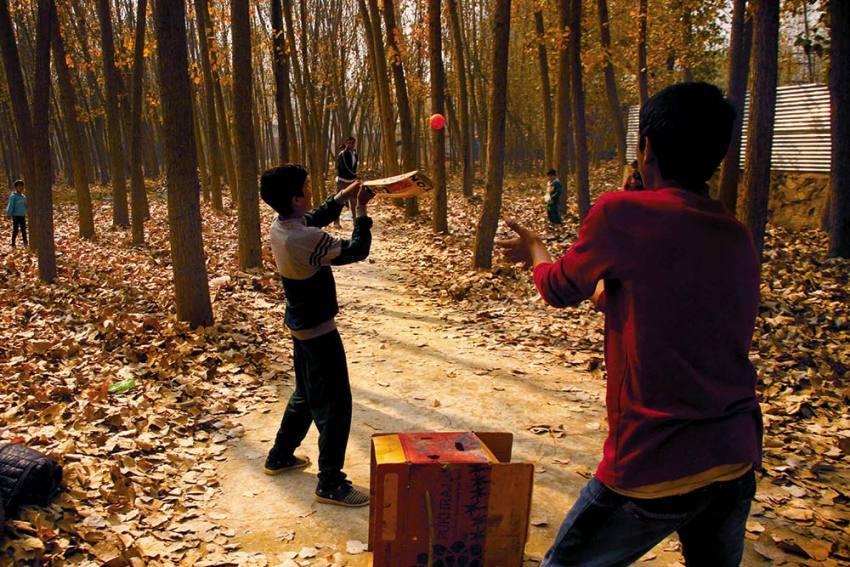 Woodstock
Children play cricket at a willow plantation on the outskirts of Srinagar
Photographs by Umer Asif
Qaiser Mohammad Ali February 12, 2020 00:00 IST Weeping Willow: Why Kashmir's Bat-Making Industry Has Been Hit For A Six 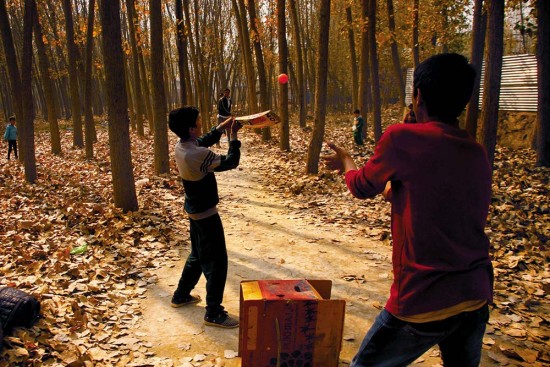 Imagine a perfectly executed cover drive in a packed stadium—the bat swinging down in a high arc, the sweet crack of bat meeting ball before it races away to the boundary to loud cheers of the spectators. The runs that a cricketer accumulates are as much about his skills as they are about the perfect cricket bat crafted from perfectly mature willow. The scenic hills of Kashmir, where the snow runs deep in winters and the summers are mellow, are home to the Kashmir willow, the tree from which comes some of the best cricket bats in the world, considered on a par with, if not better than, the English willow. And budding cricketers of India walk out to dusty fields wielding bats made of Kashmir willow to hone their skills that would one day perhaps ensure them a place in their state or national teams. International cricketers may prefer bats made of the much lighter English willow, but for junior players it has invariably always been the ubiquitous BDM, SG or SS bats made of home-grown willow.

But the Kashmir willow no longer carries the punch it was once famous for. Far-reaching political upheavals coupled with several other factors have pushed Kashmir’s willow industry to the brink of extinction, say people inv­olved in the business—from farmers who grow the Kashmir willow to bat manufacturers, and those in between. In the willow-growing areas, the inferior quality poplar is replacing the Kashmir willow tree, which takes much longer to mature—15 to 20 years compared to less than 10 years a poplar takes to be ripe and ready to cut. Besides, lack of infrastructure; absence of technical know-how that inc­reases the cost of bats; smuggling of clefts—blocks of wood dried in the sun for up to six months—from Kashmir; indifference of successive governments, both at the Centre and the state; high rate of GST (12 per cent for bats); and the 2014 floods have also dealt a telling blow to the bat-making business. 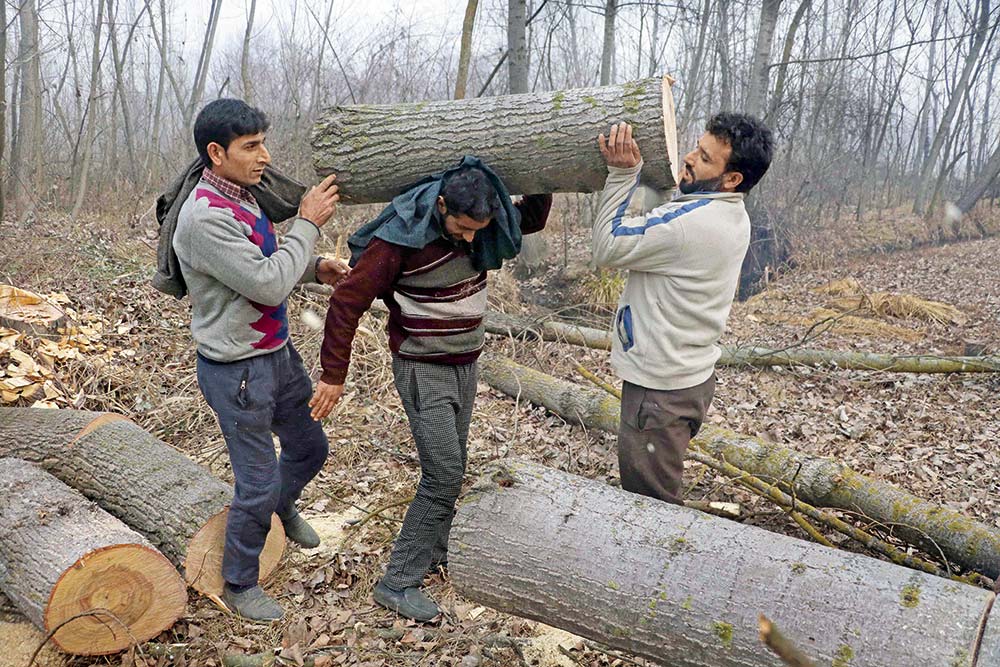 No surprises then that everyone connected with the business—from Jammu and Kashmir to Jalandhar and Meerut, the hubs of bat manufacturing—is painting a depressing picture. “One day will come when there will be ord­ers for bats but there will be no Kashmir willow. That might happen in five to eight years from now. Remember, about 15,000 people in Jammu and Kashmir are involved in the willow business,” says Mohammad Amin Dar, vice president of the Cricket Bat Manufacturers’ Association of Jammu and Kashmir. The association’s secretary Fayaz Dar paints an even more depressing picture. “The Kashmir willow could become completely extinct in five to six years.”

For several decades, Kashmir willow has been a household name and the fav­ourite of millions of Indian cricket lovers and players who use it for both recreational and competitive cricket. From gully cricket to top domestic tournaments like Ranji Trophy, players at all levels have been using this willow for long. But changes in political and societal dynamics of Jammu and Kashmir have coincided with a rapid decline in the growth of Kashmir willow. Farmers are increasingly taking to growing poplar—used mostly for making bats for tennis ball cricket, bes­ides pencils and plywood—that gives quick returns. 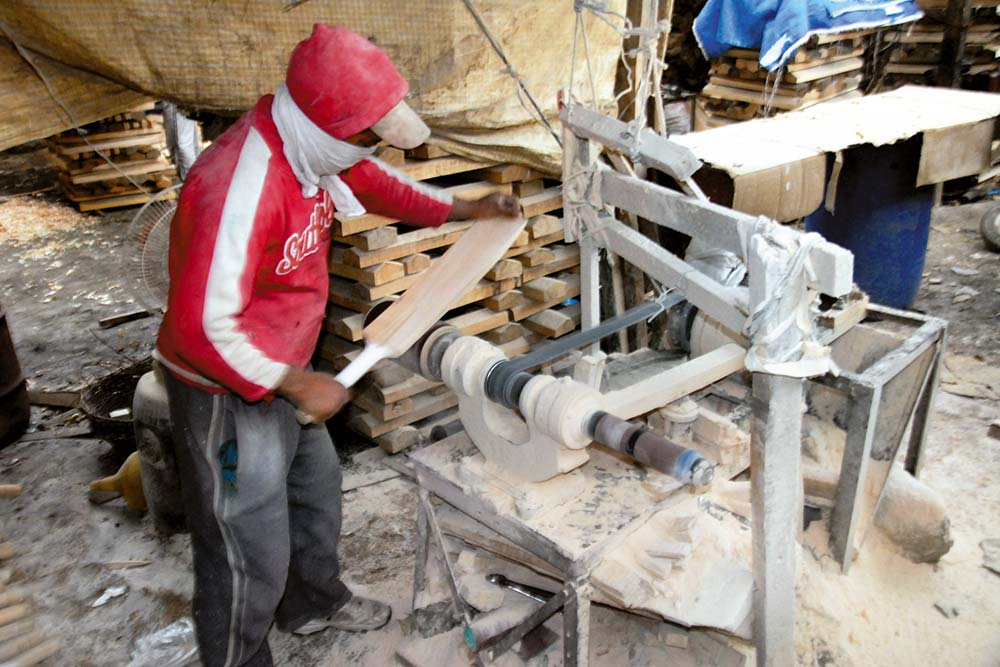 Rakesh Mahajan, director of BD Mahajan & Sons of Meerut which makes the popular BDM bats and balls, sounds even more pessimistic. “They are cutting more trees and planting less. It will have a very bad effect on the bat manufacturing industry. Bats will become expensive and quality will go down. As a result, in the next five to six years, Kashmir willow could bec­ome extinct,” Mahajan tells Outlook. Pushp Kohli of Beat All Sports-Vampire, a company launched in 1935 in Sialkot, now in Pakistan, talks about the inc­reasing cost of bat manufacturing. “The supply of Kashmir willow has become scarce. We get semi-finished bats from Kashmir. But since Kashmir is closed (after abrogation of Article 370) for the past six months, I am now paying double the amount for the semi-finished bats,” rues Kohli.

Such is the attraction of the bat-making industry that it still lures the young and educated. Firdaus Khan, 29, armed with multiple degrees in adm­inistration and business, is one such young and dynamic bat manufacturer from Kashmir who left his cushy private job to pursue the willow business. Besides having some strong views on the dep­ressing scene, the co-proprietor of Kashmir- and Meerut-based based Khan International Sports is also worried about the future of Kashmir willow. “In the coming years the Kashmir willow may come to an end, but we can’t be specific about the time. If that actually happens it will definitely imp­act the Jammu and Kashmir bat industry comprising over 200 units,” says Khan, whose firm manufactures and supplies both English and Kashmir willow. 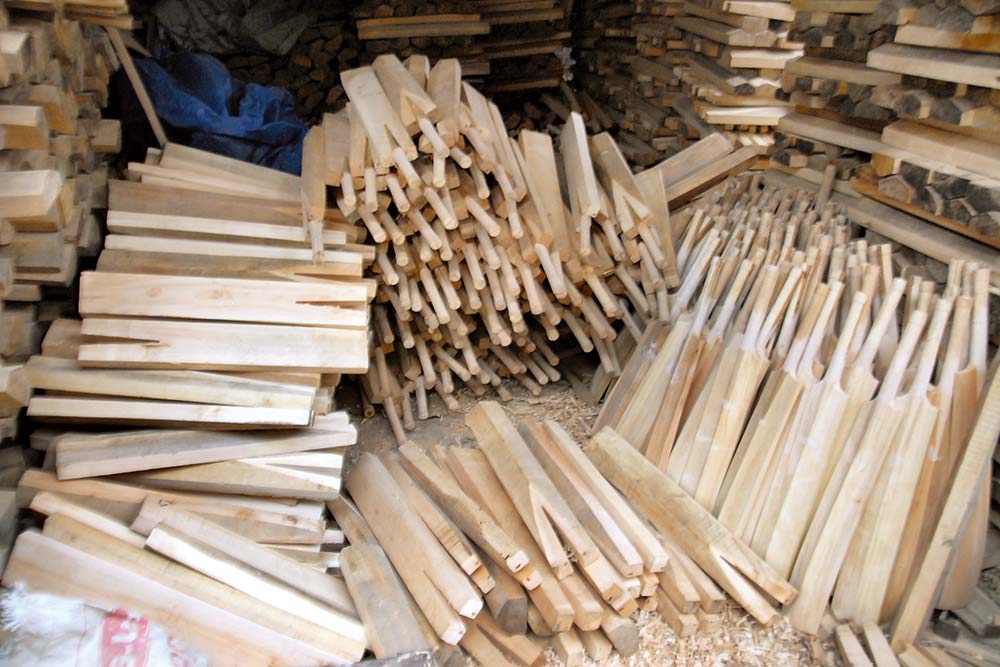 The scrapping of Article 370 last year and bifurcation of Kashmir and Jammu into two Union territories have only added to the existing problems of both farmers and bat manufacturers. “There is no elected government for six months. So who do we speak to (about our problems)? During President’s rule, we met the governor’s advisor in July 2019 and app­rised him of the problems we are facing, but soon Article 370 was abrogated, so no action has been taken,” says Amin Dar. In 2016 too, the bat manufacturing industry in Jammu and Kashmir, as well as in Jalandhar and Meerut, was majorly impacted due to the unrest and a subsequent long per­iod of curfew in the state.

Kashmir willow has been a household name for millions of Indian cricket lovers and players.

That Kashmir willow is in short supply is also evident from the declining revenue generation from export of bats. In each of the past five years, India’s revenue from export of bats has declined by Rs 12.23 crore, as per data obtained from the government-patronised Sports Goods Export Promotion Council (SGEPC). In 2014-15, export of bats was to the tune of Rs 74.24 crore and in 2018-19, the figure fell to Rs 62.01 core. Are the declining export numbers because of farmers growing less Kashmir willow? “It’s difficult to pinpoint one reason. Non-availability of willow is one reason, because the movement of willow clefts from Jammu and Kashmir to other parts of India is banned,” says Tarun Dewan, executive director of the council. Dewan points out that despite the size of the industry, Kashmir willow was never grown in an organised manner.

Lack of technical knowledge and skilled hands is one of the major problems. In 2008, the Jammu and Kashmir government established a common fac­ility centre (CFC) in Sethar Sangam in Anantnag district, for seasoning of clefts, or drying of the willow. But it was shut down within a few months. Bat manufacturers point out that there were three main reasons for CFC’s shutting down: costs were inc­reasing due to a lack of technical knowhow; the government did not follow up after setting it up; and, technical persons involved in CFC were from outside the state. 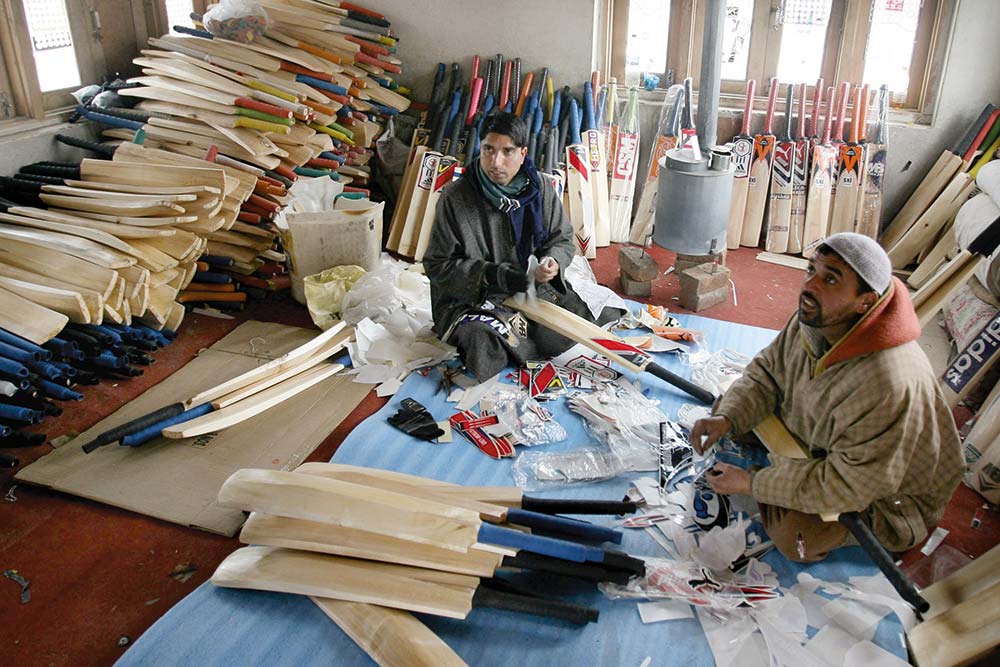 The other big issue that has historically crippled the willow business is smuggling from the state despite a ban under the J&K Willow (Prohibition on Export and Movement) Act, 2002, which stipulates that only ‘finished’ bats would go out of the state. But, the ban has been blatantly defied, thanks to a well-established system of paying bribes on the Jammu and Kashmir-Punjab border to smuggle out semi-finished bats. “The forest department of Jammu and Kashmir is res­ponsible for giving permit for the finished bats to go out of the state. But trucks loaded with semi-finished bats cross the check-post at Lakhanpur, mostly at night,” says Amin Dar. A prominent bat manufacturer in Meerut says bribes of up to Rs 1 lakh per truck is paid at the Jammu and Kashmir-Punjab border.

As the Kashmir willow business goes down, some farmers have turned to other businesses. “Today, youngsters don’t have patience to wait for up to 20 years for a Kashmir willow tree to mature. Also, there are certain restrictions by the government, like a bar on growing Kashmir willow trees on the banks of the Jhelum since 2017. As a result, some of willow-growers have switched to apple business,” points out Imtiyaz Ahmad Paray of the Anantapura-based Asian Crescent Sports.

Faced with a grim future, the SGPEC is about to launch an initiative to train young people on cutting and shaping willow with the help of machines, to be installed at ITI in Jammu city. “We have involved bat manufacturers’ association of Jammu and Kashmir. Machines would be installed in about two months, and there will be batches of 25 students. Two trainers from MSME-Technology Development Centre, a central government non-profit autonomous organisation based in Meerut, will be sent to train these students,” says Dewan. A bat manufacturer of Kashmir says if this initiative should take off successfully, “transparency would be needed”.

Trust and transparency, as of now, are in huge deficit in the bat manufacturing industry of Jammu and Kashmir, the supply line of the world-famous Kashmir willow. And any disturbance in the industry will mean a cut in the supply lines to the country’s future Virat Kohlis and K.L. Rahuls who could be perfecting their straight drives on a sandy beach in Chennai or a sun-baked public ground in Jharkhand.