Sourav Ganguly didn't deny a BJP hand in his coronation as the president of the Board of Control for Cricket in India. Indian cricket elections have always had a strong link with political forces, he told Outlook in an exclusive chat 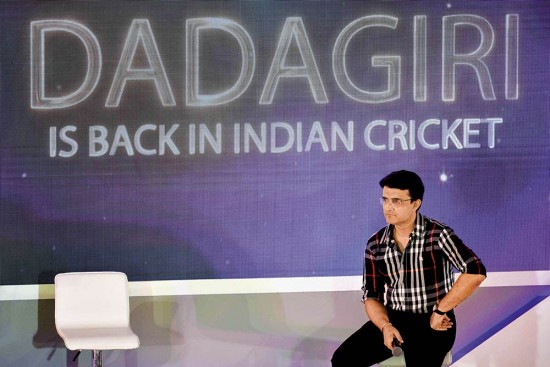 Everyone wants a piece of Sourav Ganguly. It has been like that ever since he became India captain in 2000. Ganguly, Dada for all, rarely has an off day. The 47-year-old’s public life has suddenly taken a dramatic turn. Ganguly has been tasked with heading one of the world’s richest sporting bodies—the Board of Control for Cricket in India. Indeed, he has been Indian cricket’s crisis man—tasked with steering a team cowering under the shadow of match-fixing to becoming one of India’s most successful Test captains overseas. Monday (October 28) was a holiday in Calcutta—dressed in a casual yellow kurta and pyjama, Ganguly was “working from home”. He still found time to chat with Soumitra Bose in an exclusive conversation. Excerpts:

October 14 was a special day for Bengalis...Abhijit Banerjee won the Nobel Prize and you filed your papers to become BCCI president.

I feel extremely fortunate to be spoken in the same breath as a Nobel laureate. I get a lot of affection and I cherish every bit of it. What stands out is the faith people have in me.

Do you feel sad that Bengal is stagnating in terms of opportunities and excellence?

These are things beyond my control and I won’t like to comment. I try to excel in whatever I do—as a cricketer, as Cricket Association of Bengal (CAB) president…now that I have a job to do with the BCCI, I will give everything I have.

Mohammed Azharuddin was at Eden Gardens when CAB feted you for becoming BCCI president. Given his controversial past, was inviting Azhar a conscious decision?

Azhar was invited by CAB. You...