Fast And Furious: The Thing About Virat Kohli’s Bouncers

India’s pace pack—the most lethal in the world—has the ability to demolish the best batting fastnesses. 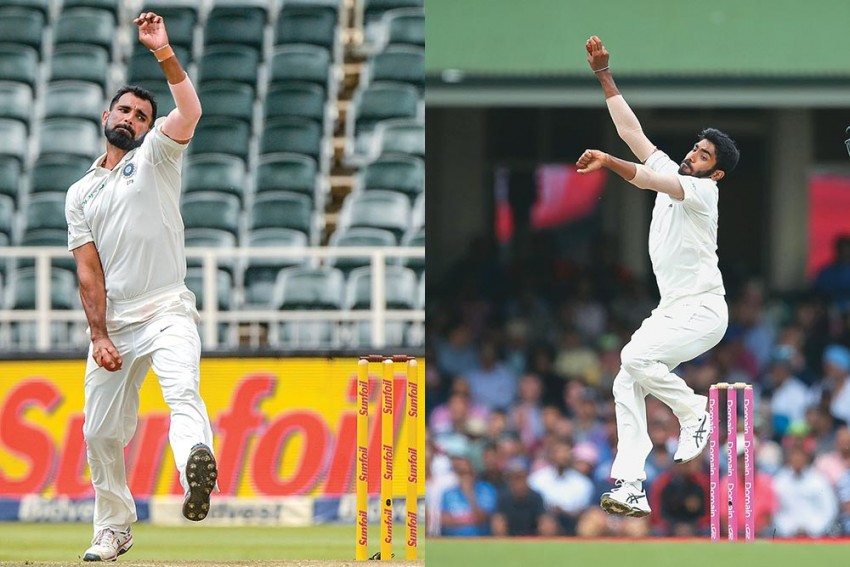 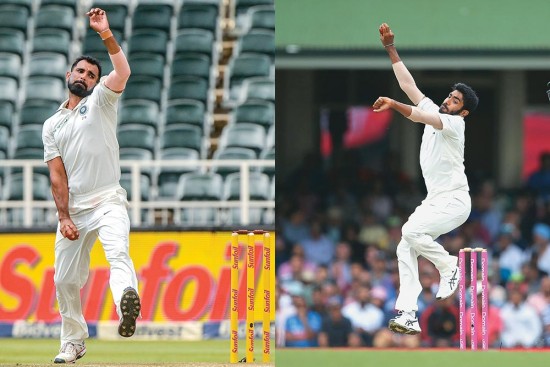 It takes a Test series victory against Australia, in Australia, for it to be oss­ified into ready legend, with a shimmer of unbelievability hanging like mist over the feat still. The mighty effort of the Indian fast bowlers, running Aussie batsmen ragged, has left an indelible imprint in the mind’s eye, and so has Cheteshwar Puj­ara’s indomitability and Rishabh Pant’s untrammelled audacity. The 2-1 victory was the sweeter for its being the first ever registered on Aussie soil, in the 12th attempt over 71 years, since that first series was played in 1947-48 against Brad­man’s ‘invincibles’. Those three horsemen that pulled India’s victory chariot, the untiring quicks Jasprit Bumrah, Moh­ammed Shami and Ishant Sharma, planned, then executed, the opponents’ downfall in various corners of foreign fields. Their skipper, Virat Kohli, would only need to give rough directions.

Dry-as-dust cricket statistics are inimical to a real, freshly-cut-grass feel of the game, but do provide frames for us to focus on. Like this una­mbigu­ous statement of dom­­inance: of the 70 Austra­lian wickets that fell, the four pacers bag­ged as many as 50, that is, 71.43 per cent, while the four spi­nners shared 20 scalps. The fourth pacer, Bhuvneshwar Kumar, didn’t get a single Test. Treat this series as a culmination if you will, but they have been an elemental force for some time. If they elicited muted plaudits, it was because India lost, part­i­cu­larly in England and South Africa in 2017-18.

In England, where India were clobbered 1-4 in the Tests, the five speedsters (inc­luding Hardik Pandya), led by Ishant, the most experienced and the tallest, punctured and pummelled the English top order as no other Indian pace-pack has. They snared 61 (74.39 per cent) of the 82 wickets; that the batsmen failed the team is a different issue. Before England, there was South Africa—land of pace, bounce and terror for Indian batters. This time around, our sultans of speed dealt severe blows to Protea self-esteem. During the three-Test series, the five took 50 (87.71 per cent) of the 57 wickets.

Bumrah, Shami and Ishant were brilliant in England and S. Africa, but India lost. That didn’t demoralise them.

Even on batsmen-friendly home pitches, the four quicks surprisingly outshone the spinners during the three Tests against Sri Lanka in 2017-18: 30 out of 52 wickets, (57.70 per cent)—eight more than Ashwin and Ravindra Jadeja got cumulatively. Overall, Indian fast bowlers bagged 158 wickets in 11 overseas Tests. Consider this stupendous fact: this number is only second to arguably the greatest fast-bowling pack ever assembled—the West Indian pace battery of the 1980s, who bagged 189 wickets in 12 away Tests in 1980.

Like manna from heaven, after decades of unanswered prayers, the fast bow­lers swung, cut, bounced and cowed opposition willow-wielders with unerring precision. But the batsmen let India down—it was due to their under par performa­nce that the team lost 1-4 to England and 1-2 to South Africa, while at home it managed to beat Sri Lanka 1-0 in three matches. Defeats in S. Afr­­ica and Eng­­land, even after personal excelle­nce, must have dem­oralised them, but Bum­­rah, Shami, Ishant showed admirable psy­­chological resilience to batter the hapless Aussies. Not only did they live up to expectations, but often took adversity in the sudden plunge of their delivery strides.

“Any team that wants to win matches, its pacers have to be good. This is the first time that I’ve seen an Australian team scared of Indian fast bowlers. They didn’t know how to duck under the bouncers and were often hit on their helmets. Our bowlers exploited their batsmen’s weaknesses. Kohli encouraged them as he knows they are capable of winning mat­ches,” former India pacer Madan Lal, who opened the bowling with Kapil Dev in the 1980s, tells Outlook. 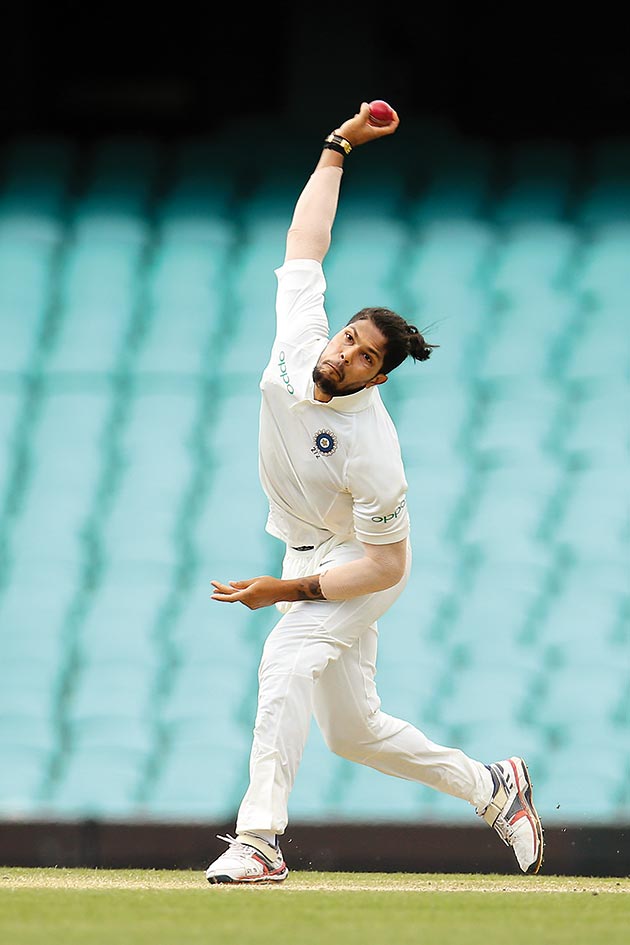 Umesh: hard-working and consistently the fastest

The wheel of fortune for India turned a full circle in Australia, insists former India left-arm pacer Ashish Nehra. “The turnaround had to happen, after the def­eat in England. Both Bum­­rah and Shami are known for bowling long spe­­lls. In Australia, the most outstanding aspect of the pacers was that they rem­­ained fit throughout the series,” emp­hasises Nehra.

Even Pakistan prime min­ister and former captain Imran Khan was hugely impressed and congratulated the Indian team. Aamir Sohail, another ex-Pakistan captain, is all praise for the fast bowlers. “Indian fast bowlers have aggression, discipline of line and length, and they are creating difficult angles for batsmen. They have learned not only ‘over’ management [planning six balls], but now manage entire spells very well too, and that has made the difference,” Sohail tells Outlook.

Bumrah, the youngest, has been the spearhead of this lethal lot. The 25-year-old from Gujarat has made batsmen’s life miserable with his speed, variations, bounce and, above all, his devastating yorkers. His high and unorthodox bowling action—he is perhaps the only international bowler who at the time of delivery doesn’t bend either elbow­­—adds to batsmen’s problems. What makes him unique is how he achieves tremendously fast pace (over 145 km at will) both in the air and, crucially, off the pitch, from a short run-up, a quality he shares with 1920s England great Maurice Tate. It befuddles the best of batsmen, who consistently expect slower deliveries. His top speed in 2018 was 153 kmph. Currently No.1 on ICC’s ODI rankings, Kohli rates him best in the world.

Shami, he of the smoothest of run-ups, has overcome hiccups on and off the field to surprise batsmen with his speed, swing and clever movement off the pitch. The 28-year-old’s fastest ball last year was timed 149 kmph. “He bowls a beautiful line, reverse swings the ball, and it often lands on its seam. He is short, but height doesn’t matter. But India’s pace attack revolves around Bumrah. He’s brilli­ant with his variati­ons, yorkers and the slow ball,” says former India speedster Chetan Sha­rma, who himself generated extraordinary speed despite being dim­inu­tive. Umesh Yadav, 31, is the fastest of the gang, but somehow he is no more an automatic starter in the XI.

No doubt, pitches in Aus­tralia and South Africa are hard and bouncy, a factor that assisted Bumrah & Co. In England, overcast conditions helped seamers like Bhuvneshwar Kumar, who relies heavily on swing on and off the pitch. But he couldn’t play there as he was injured, and he, too, couldn’t break into the XI in Australia as Bumrah, Shami and Ishant wove a deadly web of whirlwind-like mayhem.

Karsan Ghavri, a former India left-arm pacer who played a crucial role in India’s famous Test win in Melbourne in 1980-81 along with Kapil Dev, says India now has an embarrassment of riches. “This is the first time in Indian cricket history that we have a choice of pacers. Today, we have six or seven quality fast bowlers to pick from. In the ’50s and ’60s, we had quality spinners,” Ghavri tells Outlook.

Kohli, who gives his team­mates the freedom to “exp­ress themselves” and play fearlessly, deserves credit for this fast-bowling succ­ess too. Former India pacer and ex-national selector Bhupinder Singh senior prai­­ses the captain for encouraging and handling them well. “Kohli leads from the front. Since he himself gives his all and fields so well, the others, bowlers inc­luded, know only if they give their 200 per cent will Kohli be happy,” says Singh, who had an unorthodox bow­­ling action himself.

There is an opinion that this Aus­tra­lian team, without the banned Ste­ve Smith and David Warner, was one of the weakest—probably THE weakest—that India has faced in a long time. Tendulkar and Madan Lal are on the same page on this. Tendulkar says Aussies were an “okay side” and “felt a vacuum” without their two batting pillars. “I exp­ected this [Indian win] because I don’t feel that this Australian side was a strong one as such,” says Tendulkar. A typically blunt Madan Lal points to yet another reason for Australia’s dismal show—the monstrous shadow of T20 on five-day Test cricket. “Australia plays around Smith and Warner. But we didn’t ask them not to play. So, their absence can’t take the credit away from India’s win. Also, I think Australia’s Big Bash T20 league has hit them badly, as no batsman looked like staying at the wicket,” he points out.

The millenarian promise of a world-beating Test side has come true at last—on the back of our merchants of unfettered speed, India can win anywhere, against anyone. Ahead looms the next big test: the 50-over World Cup in England from May-July. Bumrah will again be the first lance to pierce opposing batting line-ups, with Bhuvneshwar joining the pace gang in favourable conditions. Even as we mull over our winter of deep contentment, they will be sharpening their blades.