Batting statistics are forever mobile and given current figures, Steve Smith and Virat Kohli are far ahead of their 'Fab Four' colleagues Joe Root and Kane Williamson 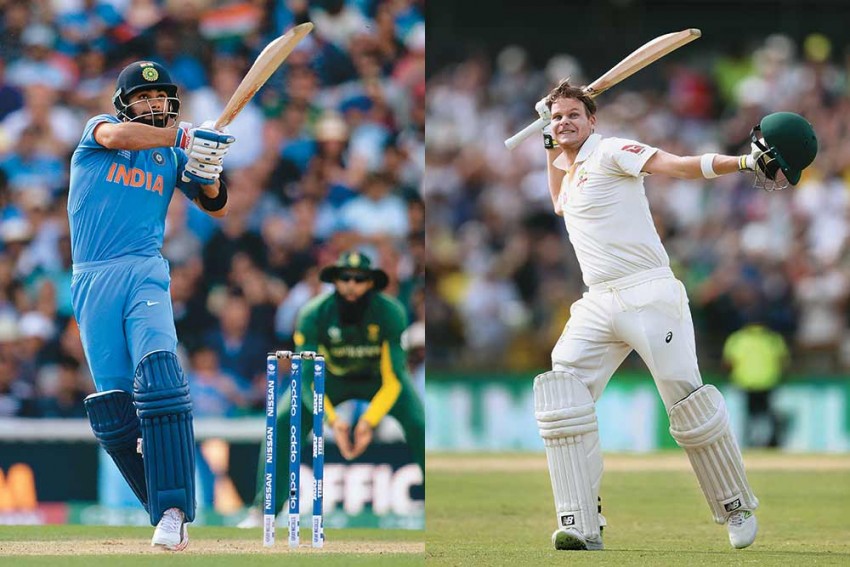 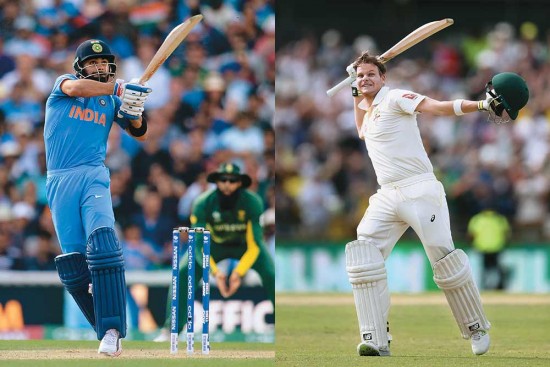 In the foodchain of international batsmanship, they are the two dominating predators striding the field, colossi whose ravenous appetite for runs result in exploits that cruelly diminish others’ honest efforts. Steve Smith and Virat Kohli are dominating the game like few others (and those few are undisputed legends) have done—with every innings of one being compared threadbare with the other, the scales tipping this way or that after each passing game.

“I thought Kohli was the best batsman I’ve ever seen bec­ause of the way he plays in all forms, but Steve Smith...that’s another level,” Justin Langer had said after Smith’s twin centuries in the first Ashes Test at Edgbaston, Birmingham. It took two exemplary innings for the former Australia opener and current coach to rate his compatriot the best.

After Smith’s triumphant return to Tests since the heartbreak of a yearlong ban, normal service resumed in the Kohli vs Smith debate too. It had to—496 days since his previous Test innings, Smith picked up where he left off, scoring 144 and 142 in hostile conditions to help his side register a 251-run win. In the drawn Lord’s Test, the 30-year-old hit 92. He didn’t bat in the second innings after concussion brought on by a Jofra Arc­her bouncer. Smith sat out the third Test at Headingley. Despite that, it took him only three innings to reclaim the top ICC batting spot from Kohli in Tests. Smith had the No. 1 ranking in December 2015; Kohli took over the spot in August 2018, when Smith was out of action.

Smith’s recent exploits—a staggering 774 runs in seven Ashes innings at a Bradmanesque average of 110.57—have left cricket’s classiest windbags blundering for superlatives. Comparisons with Kohli are inevitable—indubitably, they are the two best players of the modern era.

Yet, both Smith and Kohli had humble beginnings to their Test career. Smith’s leg-spin (the skill that earned him his international cap) didn’t inspire confidence; Kohli didn’t set the stage on fire either. They showed their true colours soon. Kohli marked his arrival in Tests with a sublime century in Adelaide—the lone batting sparkle during the disastrous tour of Australia in 2011-12. Smith was axed from the Test side for two years before being recalled for the India tour in 2013. On a spinning track in Mohali, he scored 92—an early glimpse of the stellar stands of today. A few months later, he hit his maiden century against England at the Oval.

As Smith and Kohli fashioned aureoles of near-invincibility, two others—Kane Williamson and Joe Root—came into batting prominence, so that an exclusive club of ‘Fab Four’ gained curre­ncy. Yet batting statistics are forever in flux, and currently, Smith and Kohli have pulled far ahead of Williamson and Root. While the Englishman and the New Zealander are modern exemplars of the art of batsmanship too, their conversion rates (from 50 to 100, exp­ressed as a percentage of innings) in the past five years (23.52 and 43.33 respectively) aren’t as imp­ressive as that of Smith (51.16) and Kohli (59.38).

If a quality batsman is to be judged by his overseas exploits, Kohli and Smith, again, stand apart from the brightest of bat-wielders. After a stupendous tour of England in 2018 (593 runs with two tons) Kohli had a sub-par series in Australia in 2018—282 runs in four Tests with a century. However, his magnificent record Down Under isn’t marred much. In 2014-15, he had scored 692 runs in just four Tests. Also, Kohli averages over 71 in New Zealand. Smith’s away performances—need we asseverate—have been remarkable. He averages 59.55 in England, 131 in New Zealand, 41.1 in South Africa, 60 in India and 41.16 in Sri Lanka.

Chetan Sharma, former India fast bowler, said if he had to pick just one for Tests, Smith would have a slight advantage over Kohli. “At the moment, I would say Smith is a step ahead of Kohli,” Sharma tells Outlook. “His (Smith) unorth­odox stance, the way he shuffles across, it looks as if it wouldn’t be that difficult for a bowler to get him out, say LBW. But his hand-eye coordination is superb, like Virender Sehwag,” he marvels.

While the rivalry between Smith and Kohli for the tag of ‘the best batsman in the world’ has flared up with Smith’s redoubtable display, Sharma feels their consistency should be an example for players like K.L. Rahul. “There’s healthy competition (between Smith and Kohli). It is an inspiration for upc­oming batsmen,” says Sharma. “Rahul got seven fifties in a row. But had he converted them into centuries, he wouldn’t have been dropped. This is where he can learn from Kohli and Smith.”

Curently, Kohli and Smith sit supreme on all batting parameters. Distinctive, widely-praised styles with a full repertoire of strokes, fable-like fecundity breeding immaculate numbers…why, do we exaggerate when we state that they are the fabbest of the four?

Performance as Captain: 18 centuries with an average of 61.19

Centuries in Winning Cause: 11 of overall  25 centuries have propelled India to a victory

Performance as Captain: 15 centuries, averaging 70.36, before the yearlong ban for ball-tampering

Centuries in Winning Cause: 18 of overall 26 Test centuries led to victory

Performance in subcontinent (including UAE): 11 Tests in Asia, scoring 1,039 runs at an average of 49.47 including four centuries and as many fifties

Can You Ms ’Em? Not In Toronto