Home  »  Magazine  »  Sports  » Kashmir / Game On »  Real Kashmir, Not Just A Team In The I-League, It's Showcasing Football's Power To Unite

Real Kashmir, Not Just A Team In The I-League, It's Showcasing Football's Power To Unite

Thousands have flocked to see Real Kashmir play their home games at Srinagar's TRC Turf Ground. The games have enabled Kashmiris to embrace some semblance of normalcy in a Valley under lockdown 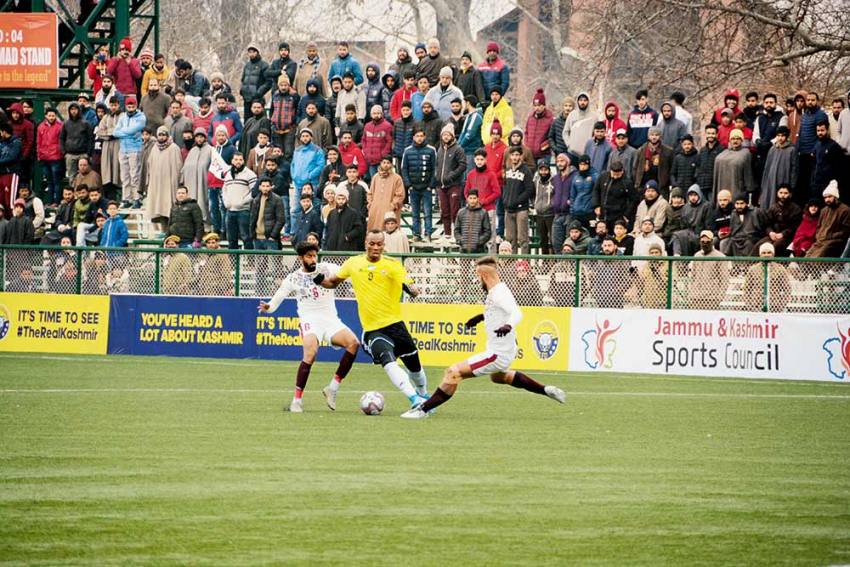 Having A Ball
Players of Real Kashmir (white jersey) and Mohun Bagan during their I-League clash
Photograph by AIFF
Neelav Chakravarti January 09, 2020 00:00 IST Real Kashmir, Not Just A Team In The I-League, It's Showcasing Football's Power To Unite 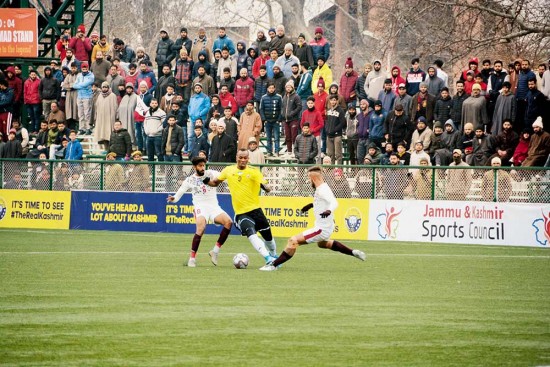 The snow-laden mountains in the distant background appear in a haze. Up close, all around the TRC Turf Ground, the leaves of the chinar trees are drooping with the weight of frost. It’s 2° Celsius in Srinagar—damp, dark and brooding on a January morning in the picture-postcard capital of Kashmir. Ten kms away, the iconic Dal Lake, is frozen. Inside the stadium, there’s warmth as 10,000-plus people have packed into the stands for, perhaps, one their happiest moments in recent memory—the I-League match between Mohun Bagan and local heroes Real Kashmir.

Among the excited spectators are family members of Real Kashmir’s young def­ender Muhammad Hammad. His cousins have driven down 90 km from Pahalgam to watch the derby, a rare celebratory occasion in the Valley locked down since August 5 last year when Jammu and Kashmir was bifurcated and its special status revoked. For the delirious fans, between seven to 70 years, it’s ninety minutes of pure joy when the adrenaline rush is triggered by goalmouth skirmishes, not bullets or grenades. It did not matter that Real Kashmir lost by two goals to the 100-year-old sporting behemoth.

Football’s power to unite and heal has been well demonstrated over the years. In July 2013, FIFA organised a friendly between two youth teams­—unnamed for security reasons—along the border at the Golan Heights, which is under Israeli occupation since 1967. Before that, renowned football manager Jose Mourinho had exp­lained his philosophy of “succeeding against the odds” to a group of Palestinian and Israeli coaches in March 2005 during a peace mission to Tel Aviv. In September 2011, former Chelsea sup­erstar Didier Drogba was part of an 11-member peace mission to Ivory Coast, where an estimated 3,000 people were killed and 500,000 displaced in a civil war in 2010. Drogba’s presence won the mission media praise globally. In 2005, when Ivory Coast qualified for next year’s World Cup in Germany, Drogba requested the warring factions in his home country to lay down arms. 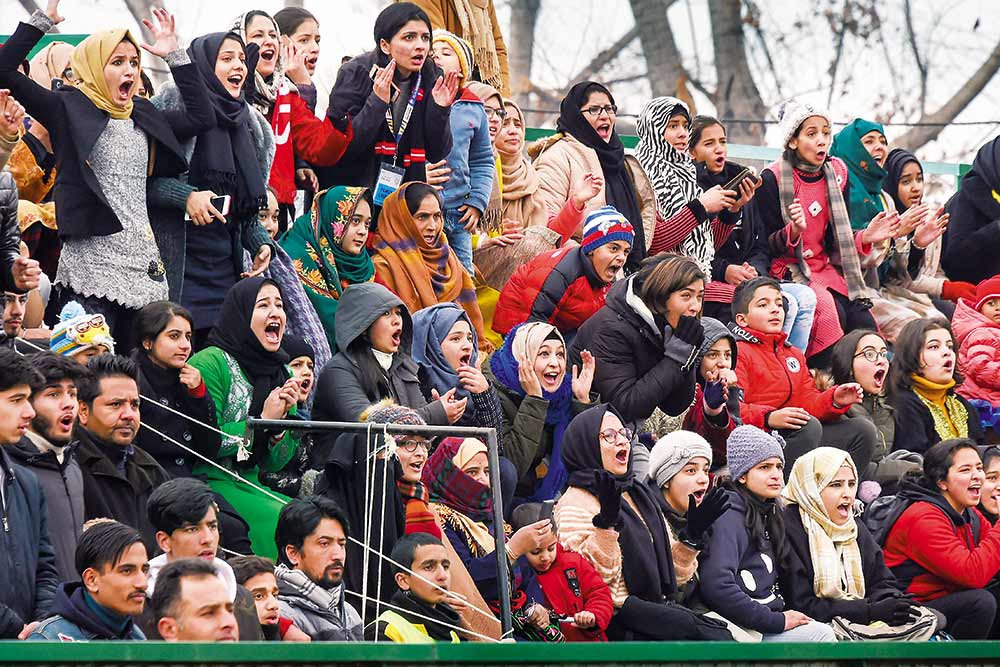 In Srinagar, at the home ground of Real Kashmir, football was the winner on that January 5 afternoon, bringing smiles to thousands of people who have been cut off from the world, forced to live without internet for more than five months, a claustrophobic life in one of the most militarised zones in the world.

The story of Real Kashmir, however, began much before the latest political upheaval.  When businessman Sandeep Chattoo and journalist Shamim Mehraj distributed footballs among children after floods ravaged the Valley in 2014, little did they know that the small gesture would mark the beginning of a sporting journey. For, it was ano­ther club, Lonestar Kashmir, established in 2013, that was already playing the nati­onal football league and a second team would have been a luxury in a state preoccupied with tourism, apple export and a long-drawn insurgency.

Football’s power to unite and heal has been well demonstrated over the years.

But football has always been Kashmir’s first love. Tournaments such as the Maharaja Hari Singh Gold Cup had huge fan followings and the hallowed Bakshi Stadium saw 40,000 spectators watching matches in the 1990s. “People would even climb the chinar trees around the stadium to watch games,” recalls Zameer A. Thakur, president of Jammu and Kashmir Football Association and All India Football Federation treasurer. The founding of the JKFA in 1964 put football firmly in the Valley’s midset. Srinagar hosted the prestigious Santosh Trophy for the first time in 1979. Football provided livelihoods too, with J&K Bank employing local talents for its team.

Real Kashmir that made rapid strides with a professional app­roach and vision after winning Rs 2 crore in state funding in 2017-18. The club appointed a Scots­man as its coach and picked its overseas imports judiciously. Although the state government was criticised for ignoring other sports, most Kashmiris didn’t want to politicise the issue. Today, the Snow Leopards, as Real Kashmir is nicknamed, have won the love and trust of football fans.

Real Kashmir has created local heroes in Danish Farooq, Hammad and Farhan Ganie. The trio has attained cult status in the Valley. Everyone recognises them wherever they go. Danish feels that football is more popular than cricket in the Valley because people find it easier to learn and follow the beautiful game. “After the 1990s, football declined a bit in the state. But then, after the formation of Lonestar and Real Kashmir, it reign­ited people’s interest. Also, when we won the second division during the 2017-18 season, people began to follow the game more passionately,” he says.

The club’s ability to bring happiness and opportunities has even enc­ouraged women to play and follow the game. It was no surprise that at least 40 per cent of the fans who turned up for the Real Kashmir-Mohun Bagan match were young women and kids.

Sana and Mehrush, just out of their teens, are two such aspiring footballers. Sana never misses a Real Kashmir home game and is a die-hard supporter. “The atmosphere here is exciting and it gives you a feeling of what sport is all about,” she says. Earlier, girls watching football games in the stadium was rare. “Nowadays, we come in groups and cheer for our team.”

There is also a social angle to women playing a “manly sport” in a society that is conservative and patriarchal. “We don’t play football for the sake of rebelling against the rules and restrictions against women. We are truly passionate about the sport, and love the game. All you need is the support of your parents, that’s all,” says Rukaiya, another budding footballer. But for passion to blossom, the system must support and unfortunately, as Sana points out, “it’s a long way to go”. Most ladies-only colleges don’t have teams and there are hardly any tournaments.

But the ice is melting. The girls say the coaches are good, the system can change. Like so many other things in this fairyland called Kashmir.