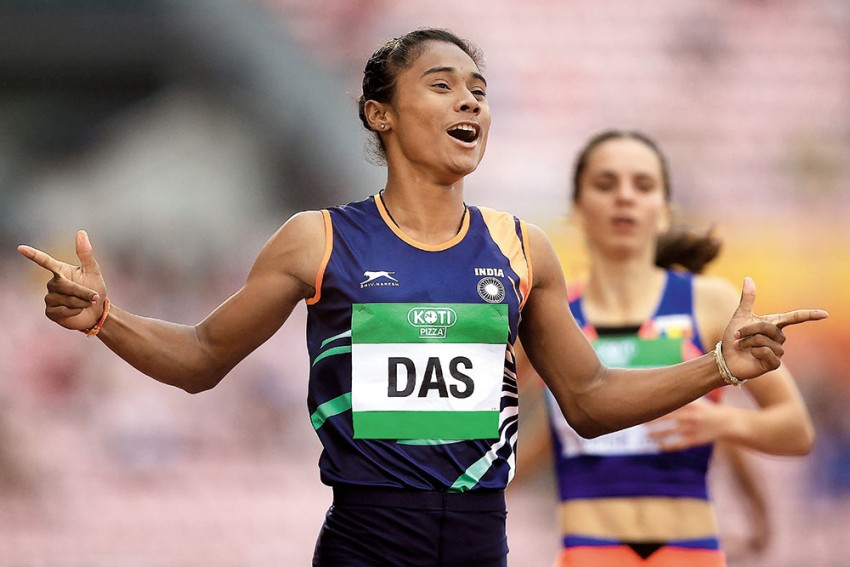 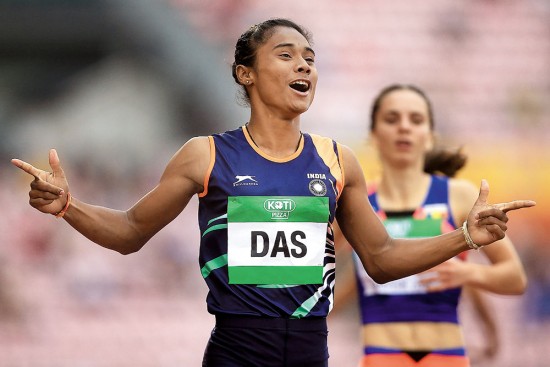 The great Western cliche of the ‘great Ind­ian rope trick’ is passe. Its 21st century successor, the ‘great Indian masala trick’, is well and truly on track—quite literally. Well, Indian masalas are seemingly spicing up performances of top Indian track and field athletes, including in-form sprinter Hima Das, as they train for a few impending big events. These athletes, now training at a pre­paratory camp in Poland with eye on September’s World Championships and the 2020 Olympic Games, have carried different kinds of spices from India, which are being used daily to satiate palates hankering for desi food, says Raj Mohan M.K., an assistant coach for the quarter-milers, from the Olympic Sports Centre in Spala.

Hima, the reigning world under-20 400m champion from Dhing village in Assam's Nagaon district, has been the toast of the season—thanks partly to the “motivation” she received from Indian spices, quips Mohan. She won five gold medals in 19 days, between July 2 and 20. The first four were 200m races; in the fourth one she registered her season’s best of 23.25 sec at Tabor Grand Prix in the Czech Republic on July 17. Three days later, she recorded her season’s best time of 52.09 sec in 400m—her first competitive race since April—at the Nove Mesto nad Metuji Grand Prix, also in the Czech Republic.

Guwahati-based coach Nipon Das, who is credited with spotting Hima, says it should be remembered that she was returning from an injury. “She didn’t go all out in the 400m race as it was her first after recovering from a back injury she sustained during the Asian Cha­m­pionships in April in Doha. It should also be rem­embered that she is competing in 200m races only to improve her pet event, 400m,” emphasises Nipon. Hima, the 400m national record holder, rem­ains modest despite the golden streak, perhaps aware of sterner tests ahead, including qualification for the upcoming World Championships (Sept­ember 27-October 6, Doha) and the 2020 Olympics (July 24-August 9, Tokyo). “There’s no particular reason for winning these gold medals. This is only the warm up season for me and I am simply running. My job is to run. It’s no big deal [winning medals],” Hima tells Outlook from Pol­­and.

She is only too aware of the challenges ahead of the Olympics. In 400 metres, Hima is ranked 87th in the world; in 200m, she is 122nd; her overall ranking is 1250. Being a 400m specialist, Hima’s personal best timing is 50.79 seconds which, considering how even milliseconds matter in athletics, is in a different league from her gold-­winning time in Prague on July 20—52.09 seconds. Also, her 200m personal best is 23.10 seconds, and the best of her 200m timings in Poland is .15 seconds slower.

Nipon says Hima deliberately didn’t go all-out in the 400m race on July 20. “She told me after the race that her confidence has gone up. She is run­ning the 200m races to improve her 400m race, which is her main event. Her good form will also help the Indian 4x400m relay team,” he says.

That Hima has still not qualified for the World Cha­­mpionships and the Olympics doesn’t worry her coaches. “She just missed the World Cha­mpionships 400m qualification timing of 51.80 sec [by 0.29 sec] as she clocked 52.09 sec at the Nove Mesto nad Metuji GP. The first 200m was a little bit slow. Before the race, I had told her to go for 24.50 sec in the first 200m, but she clocked 25.20 sec. That created a problem, otherwise she was very good,” explains Mohan.

Coaches are trying for Hima’s entry in tougher races for a qualification for Doha. They are confident she’ll get into Olympics too.

Mohan is confident that Hima would crack the Olympic 400m qualification time of 51.35sec at the World Championships, where she would get good competition, like Bahrain’s gold medallist Salwa Eid Naser provided her at the 2018 Asian Games. “Hima achieved her career best mark of 50.79 sec there because of the competitiveness. We are exp­ecting her to get Olympic qualification at the World Championships because more competition there will enable her to realise her full potential,” he says.

Hima’s coaches are trying to arrange her entry in tougher races so that she could qualify for the Championships. “We’ve planned a race for her on August 28. We are trying to get some races in the IAAF Diamond League in September, so that she could peak and qualify for the Cham­pionships. If we get visas to go to other countries, we’ll go. We are trying to go to Jablonec nad Nisou and Kladno in the Czech Republic because the other countries are a couple of hours away from there,” informs Mohan.

While Hima’s career-best 400m performa­nce came at the Asian Games last year, her best in 200m was clo­­cked when she won gold by beating Dutee Chand and others at the National Inter State Senior Ath­letics Championships in Guwahati in June 2018.

Guwahati-based Nabajit Malakar, another coach who works closely with Hima, is also confident of her ensuring the qualifications. “Her strongest point is her finish, and she is never bothered by who all she is competing with. Her thinking is: ‘I have to run races irrespective of the competition, so why look at the rivals’. She believes in aiming for good timings and not medals, because medals would come automatically if timings are good,” he says.

Meanwhile, Hima and 22 other Indian athletes are supplementing their training with a protein- and carbohydrate-rich diet—spiced by Indian masalas—at Spala, which has one of the best training facilities in the world. “From Delhi we bought some north and south Ind­­ian spices to give our athletes a taste of our vegetables once daily. This is because we have to think about athletes’ motivation, also a part of coaching,” Mohan avers.

Hima, too, is enjoying the food. “She likes rice and chicken curries and also likes south Indian food. Everyone likes chicken curry.... We have instructed cooks at Spala to add spices as per our athletes’ lik­­ings. They make curries, like Indian chic­ken cur­­ries, for us. The diet contains vegetarian, non-­vegetarian food, fruits and salads, soups etc. It’s like a five-course dinner, at times like a seven-­course meal,” says Mohan. Nipon informs that Hima herself loves to cook mostly boiled food while touring. “She sends me videos from the kit­chen. She loves cooking meat, chicken, and fish,” he says. Hima and the other athletes will have to del­iver as the World Championships nears. The pot is boiling.