Delhi’s Durand Cup is yanked off to Calcutta. It betrays a profound ignorance and aloofness about football.

Sporting tradition across the world is largely held sacrosanct, and fie upon anyone who dares to break it. In India, such things are trampled upon with breezy impunity by haughty officials and organisers. Durand Cup, the world’s third oldest football tournament, has run into controversy by the move to shift Asia’s oldest championship away from its natural home, Delhi. The 130th edition, supported by the West Bengal government and the state’s football association (IFA), is being played in Calcutta before galleries rendered barren due to the pandemic. The move has created genuine heartburn in Delhi, with old-timers saying the army, the custodians of Durand, has pierced football lovers in the capital with a “bullet in the heart”.

For over half a century, Durand, Rovers and IFA Shield were the blue riband tournaments of Indian football. Each tournament was synonymous with the city that hosted it. If the IFA Shield was Calcutta’s pride, Rovers meant Mumbai and Durand was Delhi’s jewel in the crown. As a nip in the air presaged the arrival of winter in the plains of north India, the Ambedkar Stadium would be all abustle with activity as India’s top clubs would arrive in the capital to re-kindle an enduring romance nurtured by the beautiful game.

For over 50 years after Partition, Durand was a roaring aff­air. Named after Sir Mortimer Durand, the erstwhile foreign secretary of British India, it started in 1888 in Shimla. In 1940, the tournament moved to Delhi. The city’s love for the competition grew stronger after 1947, when Pakistan was thwarted from taking Durand away. The three service chiefs and India’s defence secretary were instrumental in keeping Durand in India; thus did the army become its natural caretakers. A body, Durand Football Tournament Society (DFTS), was formed to run the Cup.

Since 2000, Durand Cup ran without a glitch till 2016. East Bengal and Mohun Bagan, who have won 32 championship titles between them, were a constant presence. In 2014, for the first time since 1940, Durand was moved out of Delhi to Goa. Salgaocar won it that year. Since the middle-noughties, Durand Cup started losing its significance in the Indian football calendar. While other legacy tournaments like Rovers and DCM died, Durand managed to stay afloat, but only just. As corporates wooed a weak national federation with lucrative contracts, the old, all-India tournaments suffered. Durand was not held in 2015, 2017 and 2018.

Durand Cup resumed in 2019 in Calcutta. Gokulam, the I-League champions, won the trophy, defeating Mohun Bagan. Due to the pandemic, Durand was cancelled in 2020; the army went back to Bengal for not only this year, but till 2025, saying Calcutta had better infrastructure to offer. An army spokesman says: “The chief minister, Mamata Banerjee, extended full support during a meeting with senior army officers and all government bodies like health, transport and sports extended their support to the tournament.” 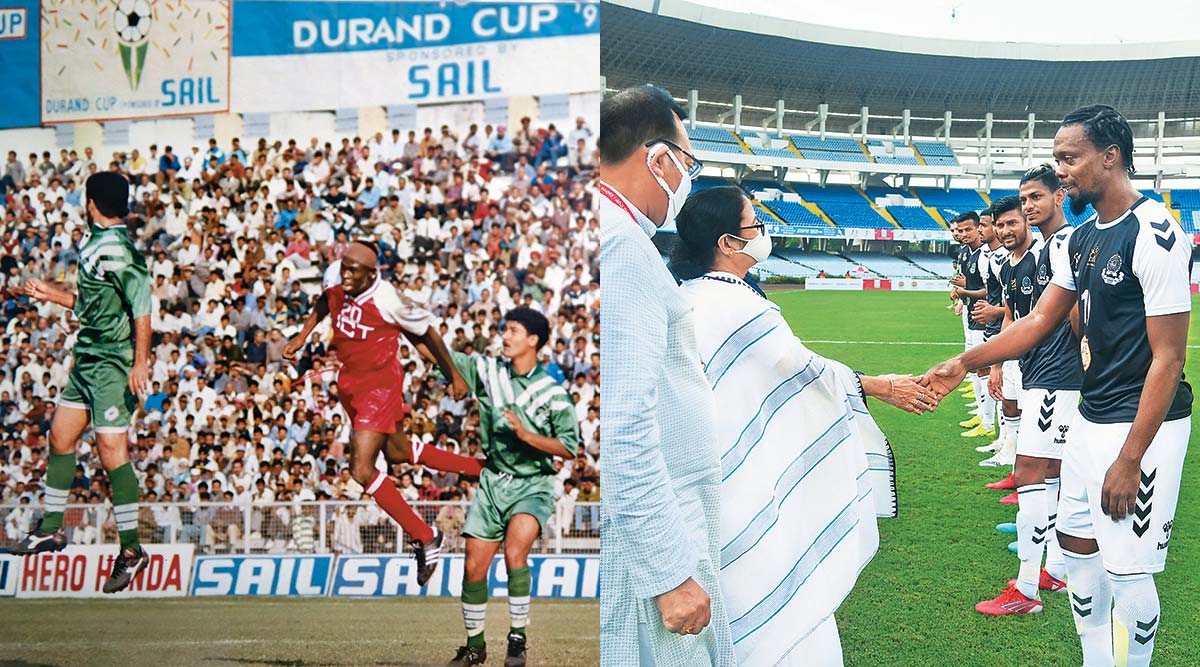 Left, an action-packed Durand Cup match in Delhi’s Ambedkar Stadium in 1996; Mamata Banerjee meets players before a match in Calcutta

But why Calcutta, asks Football Delhi’s president, Shaji Prabhakaran. Is Delhi’s Covid management poorer? Is there shortage of infrastructure? “I am not sure if the DFTS approached the Delhi government for assistance. Football Delhi is a member of Durand Cup society and nobody asked for our help. To cut off a 75-year-old bond that developed bet­ween Delhi fans and Durand Cup certainly hurts. We will be happy to join hands,” says Prabhakaran.

Veteran football journalist Jaydeep Basu says DFTS’s decision to move the Durand Cup to Calcutta is a clear indication of its failure to organise and run a successful tournament. “The army may be great at fighting wars, but I’m sorry to say that when it comes to organising football, the current batch of people has been a disappointment. They have no clue about Indian football and have ignored the passion of football lovers in Delhi. To suddenly say that Delhi does not have football infrastructure, after it staged the Durand Cup successfully for 50 years at a jam-packed Ambedkar Stadium, is just ridiculous,” he says.

Ghaus Mohammed, who played the Durand Cup for seven years, officiated as an assistant referee for two years and later commentated on 25 Durand finals live on Doordarshan, says the move to Calcutta will demotivate several teams that played in the Delhi league. “Teams like Moonlight, Buddhist Blue Stars and Simla Youngs used to wait for the Durand and compete with big sides like Mohammedan Sporting. This has been a great loss to Delhi football,” says Ghaus.

Durand Cup has attracted 16 teams this year. Five of these are Indian Super League teams and include former ISL champions Bengaluru FC and finalists FC Goa and Kerala Blasters. There are two Delhi teams from the two tiers of the I-League—Sudeva FC and Delhi FC. Gokulam of Kerala have returned to defend their title and Mohammedan Sporting, the first Indian team to win the cup in 1940, are the only local Calcutta team in the fray. With matches being played in empty stadiums, fans can only watch them online.

Both Ghaus and Basu point out major flaws in the DFTS’s current functioning. Earlier, the soc­iety was a permanent body, with officials keenly following Indian football and inviting teams on merit. “Now, officers from different regiments are posted for three years and with no knowledge of football, they find Durand difficult to org­anise. The dynamics of football have changed a lot now and hence the officers struggle,” says Basu. Ghaus says the society is no more a unified force. The air force runs the Subroto Cup successfully, but has nothing to do with Durand. “Everyone seems to be completing an assignment. There is no real heart like before and hence it’s easy to cut the umbilical cord,” he says.

No big Indian tournament is complete without the star att­raction of Mohun Bagan or East Bengal, but Durand org­anisers, even with the state government’s help, have not succeeded in getting the big two play in this edition. “It’s a shame really. Mohun Bagan, now a corporate entity after joining the ISL, have the arrogance to send their players on a holiday after the AFC Cup matches and skip the Calcutta Football League and the Durand. The club has turned its back on millions of supporters,” says Basu. East Bengal are currently putting a team together after sorting out major differences with their sponsors, courtesy Mamata Banerjee’s intervention.

Former India captain Baichung Bhutia feels Durand shifting to Calcutta is a strategic move. “There is nothing wrong if the interest of the tournament is served. I would imagine that they are banking on the Bengal government and the IFA to rope in the big three clubs every time. If the big three don’t play next year, Durand should go back to Delhi where it originally belongs….,” says Bhutia.