India’s sportspersons are creatively using their forced leave to lay the grounds for future success. COVID-19 has certainly not dampened their spirit 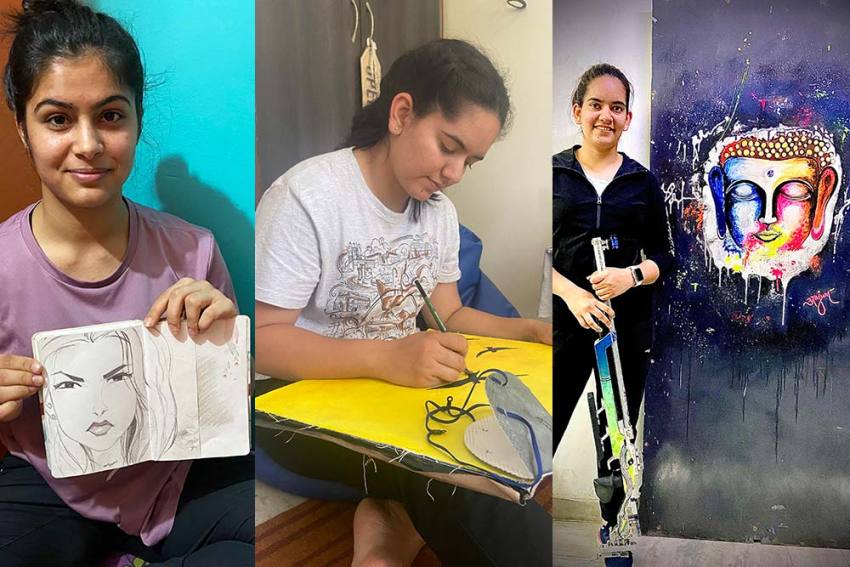 Paintball shooting, anyone?
Shooter Manu Bhaker shows her sketch, while air-rifle expert Anjum Moudgil looks a full pro with the brush and canvas. Her mask indicates the time we are in.
Soumitra Bose April 10, 2020 00:00 IST Of Master Strokes On Canvas, Dry Training And Prawn Curry - Athletes Chase Hobbies During Corona Times 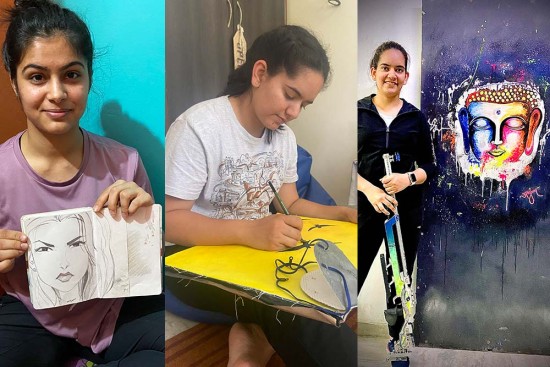 A pandemic casts a veil across all human interaction in flesh and blood—the veil of mortality. As factories, railways and airlines stand stalled, so are fields and stadiums deserted—their pitches destitute of play, their bleachers deathly silent.

With sportspersons staring at an unc­ertain calendar across the world, top Indian athletes are using the lockdown to hone their talent and spend time with families. From exchanging their pistols with painting brushes to wielding the spatula and kitchen forceps, sportspersons have found ample time to indulge in their avocations. Some are in earnest communion with their maker, others can’t stop admiring the fancy haircut they got from their better-half. ‘Work from home’, indeed, is a catch-all term.

It’s a miraculous gift of time for professional athletes who ply their trade for at least 40 weeks every year away from their families. For the first time since its existence since 1984, the Sports Authority of India, the central agency that funds and provides infrastructure for athletes’ training, faces an extraordinary situation: several teams preparing for this summer’s now-postponed Tokyo Olympics were frozen, as it were, in mid-training. 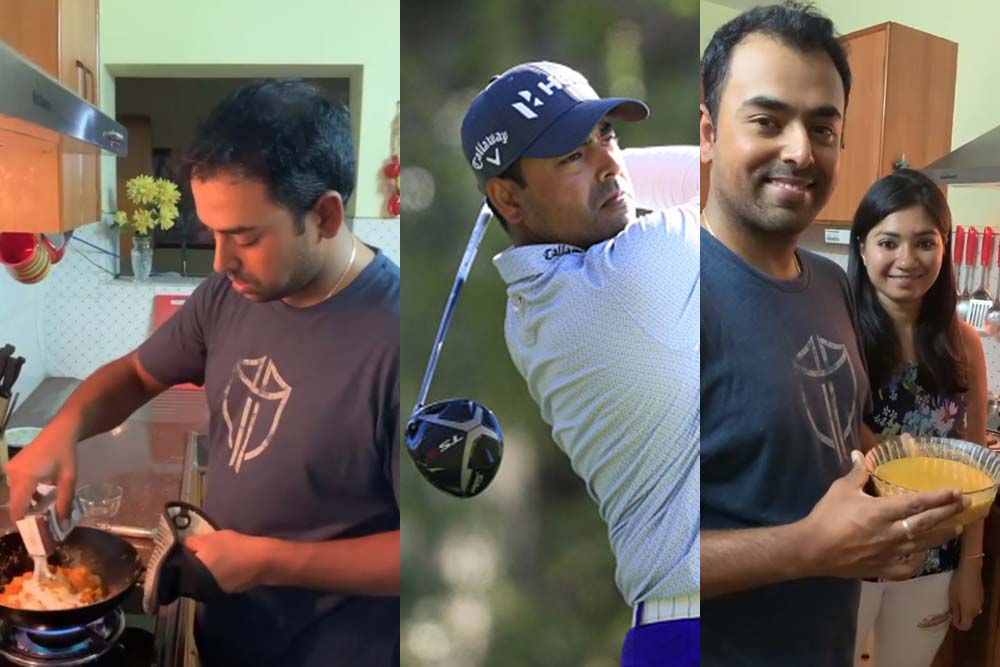 The eagle has landed

Golfer Anirban is quite a chef—here he rustles up a Bengali prawn curry and shares it with wife Ipsa.

The SAI’s Bangalore and Patiala centres house several Tokyo-bound sportspersons. Both centres have over 100 athletes and coaches each. While boxing, shooting, archery and wrestling camps have been completely closed, several middle and long-distance athletes remain there. The national women’s hockey team has spent two months in Bangalore; the men’s team, too, are left stranded after the SAI took extraordinary steps to isolate them in the wake of the COVID-19 outbreak in early March.

“We have given precedence to the health of our athletes over training. We have created quarantine-like training facilities for our javelin throwers who returned from tours in Turkey and South Africa. Such isolated training fac­ilities can be implemented for other major sports,” says SAI director-general Sandip Pradhan.

With the Olympics deferred by a year, foreign coaches like Dutchman Sjoerd Marijne, attached to the women’s hockey team, are stuck too. While men’s hockey team coach Graham Reid has his wife Julia for company, Marijne, a father of three kids, who took breaks between camps or tournaments to visit his family in Den Bosch in Holland, is not so lucky. Indian boxing’s high-performance director Santiago Nieva can’t go home to Sweden and was quarantined in Patiala after the team returned from the Asian qualifiers in Jordan mid-March. The only overseas coach able to return home (to the US) was women’s wrestling coach Andrew Cook. 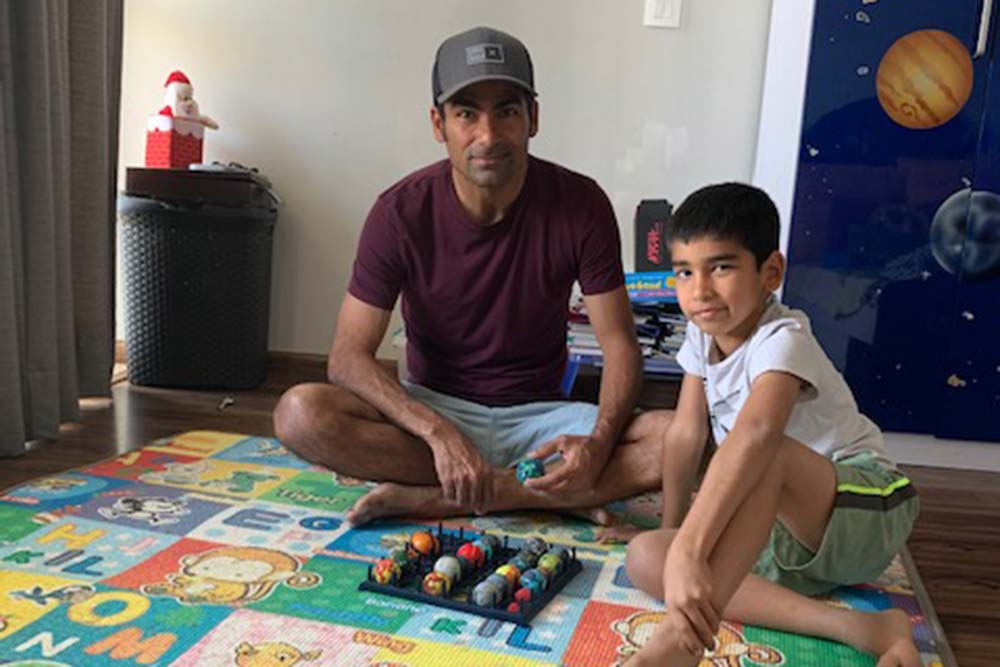 Kaif says his son Kabir is teaching him many things.

Amidst the crisis, some athletes have reconciled themselves to the strange stasis. According to their age and inclination, their reactions differ too. Shooter Manu Bhaker will be utterly disappointed by the cancellation of the Tokyo Games. A 2018 Commonwealth champion in 10m air pistol, Manu has been in the form of her life in 2019. She won gold medals at successive World Cups and Asian championships, and three medals were expected from her in Tokyo. “I think I have a lot more to show and winning gold at Tokyo will be a dream come true,” says the 18-year-old.

While most shooters have missed training, the best, like Manu, air-rifle expert Anjum Moudgil and senior world record holder in skeet Angad Bajwa have found various ways to maintain composure and focus—essential in a sport notorious for having no margin of error. Manu and Anjum have explored painting. While Manu is relatively new to it, Anjum, 26, has been painting for almost seven-eight years. “It has been three years that I have started seriously again. It is relaxing and keeps me focused, an ess­ential part of our sport,” says Anjum.

With ammunition in short supply, most shooters have resorted to ‘dry’ training—the practice of mounting the gun without actually shooting. Angad, who was another favourite for Tokyo, says dry training helps in “building muscle memory and improves smoothness in movement”. Besides a lot of weight training at the gym, Angad has been reading a book on golf. Why golf? “Like golfers, we have a similar mind-set. The work ethic and the pre-shot routine are similar,” explains Angad, who politely refused to reveal the name of the book. “It has been suggested by my Norwegian coach Tore Brovold and I would like to keep it confidential.” A world champion, Brovold won the skeet silver at the 2008 Beijing Olympics. 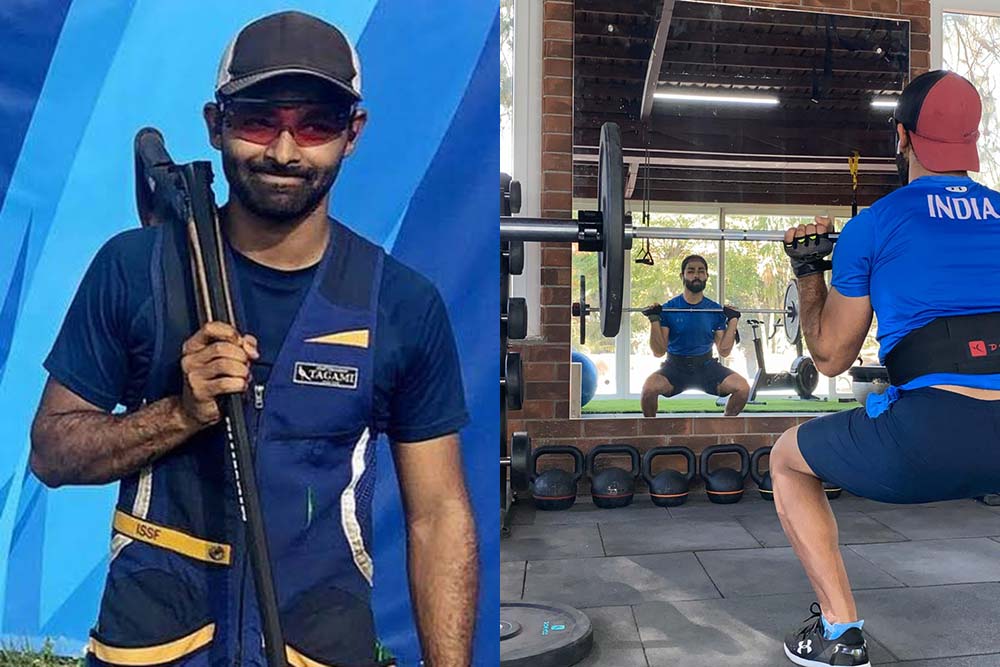 Shooter Angad is reading a golf book and gyming to keep himself focussed.

Married sportspersons with young children have a different dish to serve. India’s top golfer Anirban Lahiri, who keeps crisscrossing the world’s most difficult circuits—Asian and PGA Tours—is currently spending the longest holiday since he left home at 17 to become a pro. “It’s a lot like going back to school…like a summer vacation of sorts,” says the affable 33-year-old who now lives in Florida with wife Ipsa and their one-year-old daughter, Tisya.

Lahiri came to play in the Indian Open and got stuck when the tournament got cancelled. He is now visiting his parents in Hyderabad and has launched an Instagram series on cooking. “Tisya is the boss now and grabbing all the attention. The grandparents could not be happier,” says Lahiri. A foodie like most Bengalis, Lahiri’s cooking series started with anda-bhujiya (scrambled eggs fried with onions). “We have cooked a Bengali delicacy, Malai Chingri (prawns cooked in coconut cream) and then tried mutter-mushroom (green pea/mushroom curry). I have lived by myself for long and am relatively a proficient cook. We are doing the dishes for our friends in the US and that gives us a lot of satisfaction,” he says. 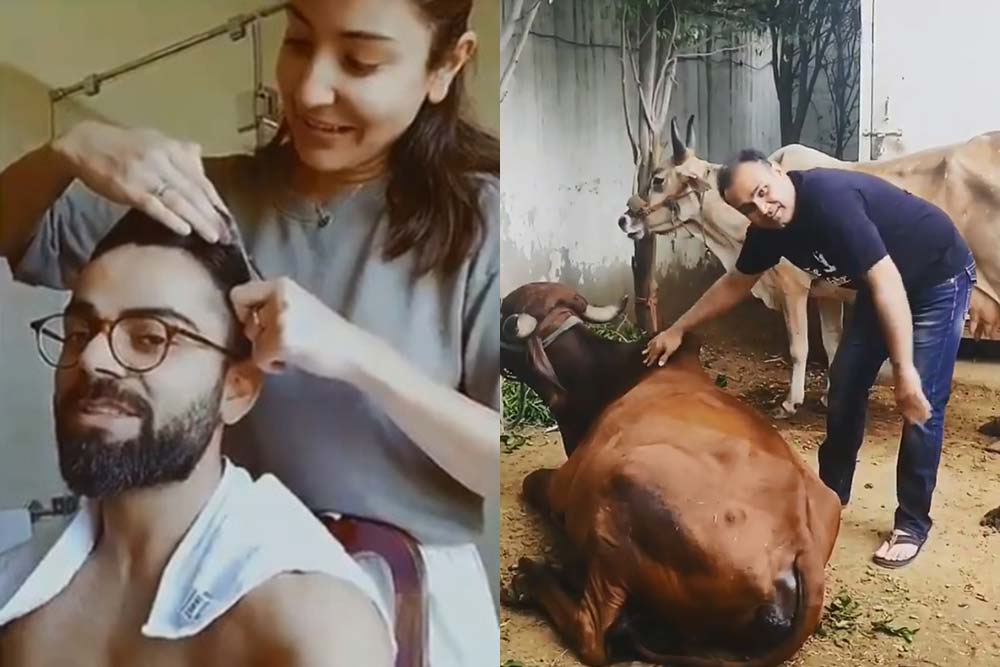 A cut above the rest

Wife Anushka gives Virat a haircut; Sehwag lends a hand in tending to his cows.

Former Indian cricket star Mohammed Kaif is also learning a lot from eight-year-old son Kabir. While helping out wife Pooja with household chores and watering the plants, Kaif, who lives in Gurgaon, is having the best time of his life since he grew up as a kid in Allahabad. “I have so much time to myself and believe me, the interaction with my kids (Kaif has a three-year-old daughter, Eva) has been an eye-opener. In the age of YouTube, Kabir is growing up so fast and seems to know more than me,” he says with a note of pride.

While waiting to know the fate of the Indian Premier League, Kaif, Ricky Ponting’s assistant at Delhi Capitals, says the current situation reminds him of his childhood days when there was no pressure of time and the world was relatively free of stress. “I am playing a lot of board games. My son is keen to know the solar system and it’s nice to see how times have changed. A bit of kite flying also takes me back to those lovely days in Allahabad.”

Lahiri says the current period forced by the global pandemic is like a “different time out”. For a professional sportsperson aiming for excellence, there is never any chutti (holiday). The athlete who intelligently uses this time to keep in touch with the sport will always be able to flatten the curve. In this case, the coronavirus!