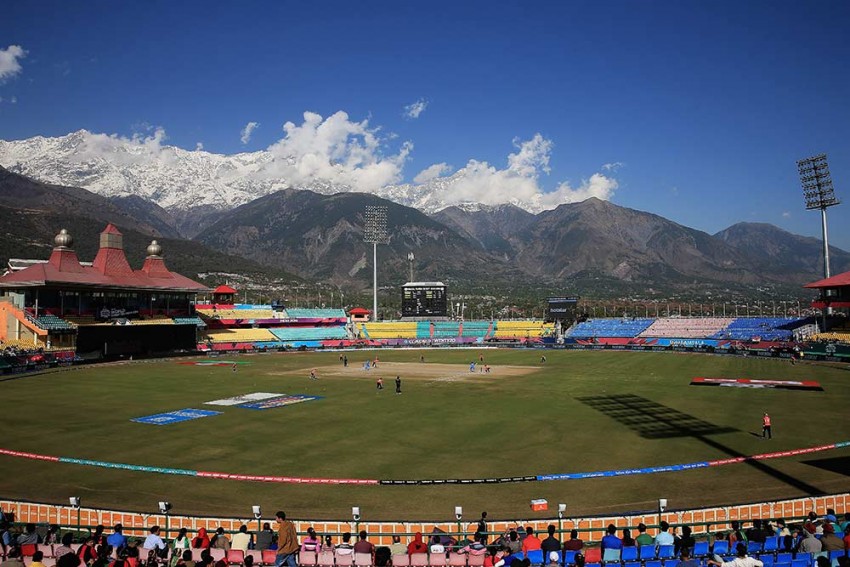 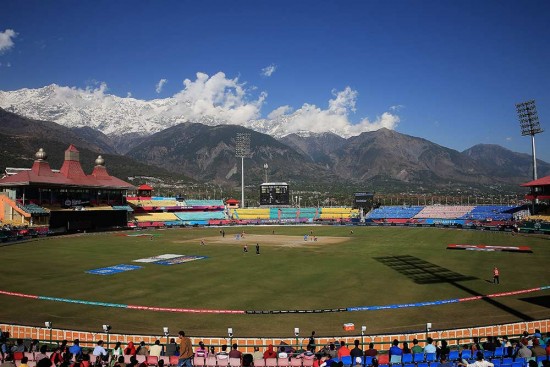 Shakti Singh didn’t graduate to the Ind­ian cricket team, his playing ­career ending with 50-plus Ranji Trophy outings. But the speedster did leave his mark, an Indian cricketing record that has stood for nearly three decades. And it all happened in rather tragi-comic fashion way back in 1990-91 when he represented Him­achal Pradesh in the Ranji Trophy. On a cool November evening, ahead of the third day’s play against Haryana, Singh and his teammates had gathered at a hotel room, talking and cracking jokes after a hard day’s work on the field. “I fell down laughing hard….I had developed cra­mps and was finding it difficult to breathe. I was rushed to a hospital where I was given at least two bottles of glucose and returned to my room after 2 am,” Singh, 51, tells Outlook. Barely a few hours later, Singh smashed a record 14 sixes on way to a belligerent 128 agai­nst an attack that comprised Chetan Sharma, then an India Test and one-day pacer. It was another 26 years before Singh’s nati­onal first-class record was equalled by Ish­an­ Kishan during his epic 273 for Jharkhand against Delhi in 2016. Singh is now a BCCI match referee and a Bollywood playback singer.

For Indian cricketers aspiring to make the cut to the senior national team, the Ranji Trophy is the biggest stage to showcase their talent. But the cricketing journey of youngsters in the country begins in other tournaments that form the India domestic circuit, one of the biggest in the world. Last year, Manipur left-arm pacer Rajkumar Rex Singh left the country’s cricket lovers in awe when he claimed all 10 wickets in an innings against Arunachal Pradesh in an under-19 Cooch Behar Trophy match. This, after travelling more than 2,600 km non-stop from Nadiad in Gujarat to Bhubaneswar.

Domestic ­circuits are the platforms on which are built the empires of successful cricketing nations.

The charm of cricket lies not just in an exquisite cover drive, for example, or an unplayable inswinging yorker. Style and skill always captivate, as does the staggering numbers racked up by players. But beyond statistics lie the beauty of the domestic set-ups of the cricket-playing countries; these are the platforms on which are built the empires of successful cricketing nations. A look at the dom­estic systems of the Test-playing nations ­reveals many interesting facets and numbers. Some countries, like India and South Africa, have big domestic numbers and have strong national men’s and women’s teams. Australia may have a smaller format, but it has still managed to produce champions due to an exemplary cricketing culture that grooms and nurtures raw talent.

The Indian talent pool is only going to be bigger after Board of Control for Cricket in India (BCCI) included nine more teams to the domestic circuit in 2018-19 on the instructions of the Supreme Court. Six of these teams are from the Northeast—traditionally football-playing states. Rex Singh also comes from a non-cricketing state. After the inclusion of the nine teams, the number of dom­estic matches crossed the 2,000-mark for the first time in Indian cricket history, as 37 teams competed over 3,444 match days—a huge 81 per cent jump over 2017-18 season. The ongoing 2019-20 season has broken all records, with the addition of a new team in Chandigarh. This season, the BCCI is organising 24 tournaments (including 11 for women), in which 547 teams will play 2,150 matches over 227 days.  “We’ve a very efficient support staff and back-end people. Match officials and our own data management system are very robust and work effectively. All those people who are involved at the domestic level for our cricket operations have the experience. So, it works in a very smooth manner,” says Saba Karim, BCCI’s general manager, cricket operations. 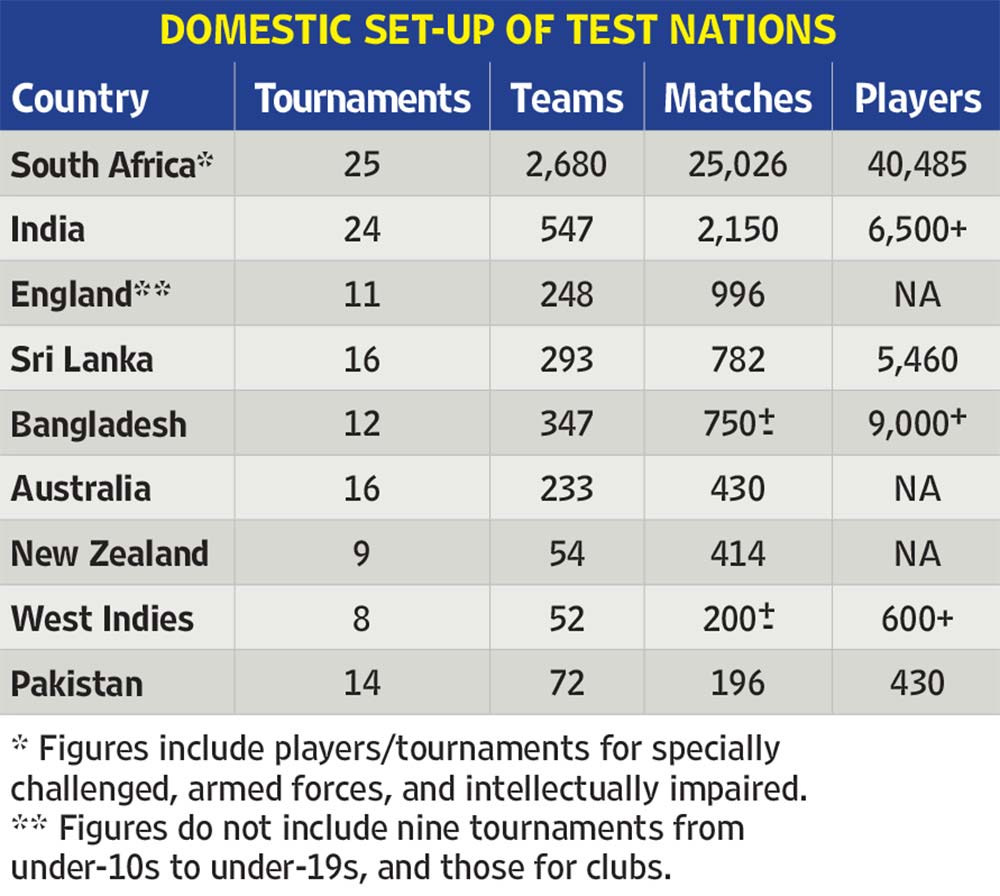 Unlike the BCCI, the English and South Afri­can boards, for example, organise tournaments starting with under-10 kids, and for the blind, the deaf, the intellectually impaired, clubs, and even armed forces. In terms of sheer numbers—most tournaments, most teams, and most active players—South Africa is the world leader amo­ngst the Test-playing nations (see box).  Pakistan, on the other hand, has opted for “qua­lity instead of quantity” this season, thus reducing the number of tournaments, matches, and teams to make the competition sharper, in line with Prime Mini­ster Imran Khan’s longstanding ­demand/vision for domestic competitions. Alt­hough the BCCI doesn’t org­anise competitions for sch­o­ols, clubs, and specially challenged players, the Indian set-up is well ensconced and has been quite successful for decades. Last season, over 100 cities hosted the matches, and the number is set to go up this year.

Picking venues, preparing sporting pitches, and weather is a big challenge for the BCCI. “Our biggest challenge is to find venues because of the inclement weather these days. The BCCI doesn’t own any ground, so we’ve to get support from the state associations, and they all come forward to host these matches. The BCCI’s cricket operations team takes care of logistics and travel. We’ve been doing that for long, but since the number of matches has gone up, the challenge is now high. But we’re equipped and pretty efficient to handle that,” says Karim, a former Test wicketkeeper.

In terms of number of domestic tourneys, South Africa is the world leader among all the Test-playing nations.

The entry of Chandigarh, which produced stalwarts like Kapil Dev, is a welcome move, especially as it has struggled for decades to get BCCI’s affiliation. “We fought the battle for 38 years to get affiliation. It’s a golden occasion for Chandigarh. Now, local talent will not go out of the city to play competitive cricket. Around 170 boys and girls will get to represent Chandigarh and the parents of these players are the happiest people around,” says Subhash Mahajan, 70, who has just demitted office as secretary of the Union Territory Cricket Association, Chandigarh.

The country’s huge cricketing structure also throws up non-playing members like match referees and umpires—the knowledge gathered over the years helping players hone their administrative skills as well. Like G. Suvarna Lakshmi, who in May became the first woman to be ind­ucted into the ICC’s International Panel of Referees. Lakshmi, a former first-class player, says her stint as an umpire in the ongoing India-SA T20 series is a dress rehearsal for her first men’s matches during the ICC T20 World Cup qualifiers in Dubai this month. “I have butterflies in the stomach, like I have before every match. But I take my job very seriously,” she adds.

For fans of the game, international matches might be the true measure of a crickter’s worth, but any player worth his or her salt will vouchsafe that it’s the domestic circuit which prepares them for the ultimate glory on the all-important 22 yards.