Home  »  Magazine  »  Sports  » Interviews  » Interview »  My Dad Wanted Me To Be A Tennis Player, Not A Supermodel, Says 'Big Babe' Mary Pierce

My Dad Wanted Me To Be A Tennis Player, Not A Supermodel, Says 'Big Babe' Mary Pierce

At 5 feet 10 and with an attractive blonde braid, Mary Pierce was just not a Grand Slam champion but the delight of lensmen for her sex appeal. The 2000 French Open champion recounts her tumultuous career and life in the mid-forties 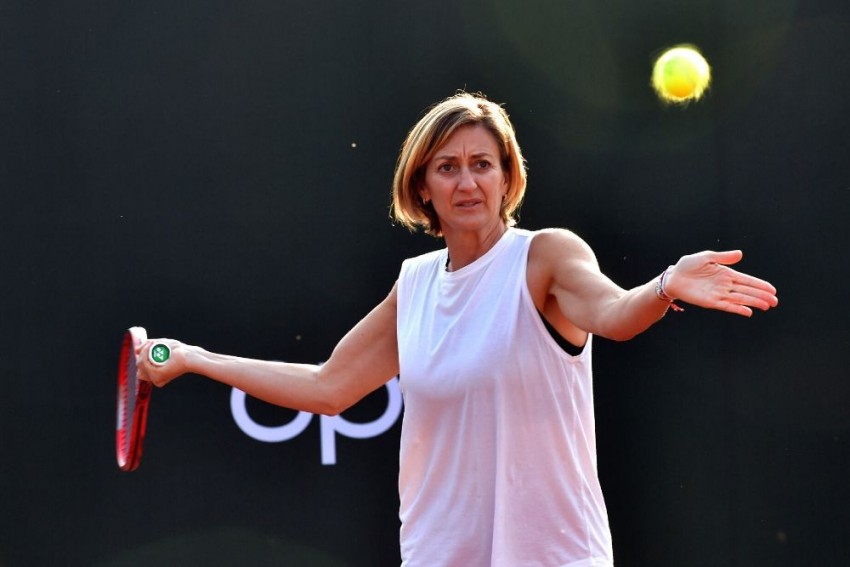 The French tennis federation has opened its doors to young Indians to play at Ronald Garros. This is quite unique.

Mary Pierce: I am very happy to be back in India to promote grassroots tennis. I remember Sania in 2003. She became world No. 1 in doubles. This is a great opportunity for Indian juniors to qualify for a junior Grand Slam in June.

Ronald Garros has always been special to you. After Australian Open in 1995 it took you five years to win the French Open…

Roland Garros is my favourite tennis tournament of all times and it's my favourite Center Court on earth. It’s like my backyard and it's like being at home for me. We moved from the US (Mary’s dad Jim was American) to France when I was 13 and that’s when the decision was made by my family that I would represent France (Mary’s mother Yannick is French). And so I did. I played Fed Cup, won twice, played the Olympics thrice in my career. But winning the French Open in 2000 was special. To win a Grand Slam in front of your family, friends and countrymen was dream come true. And I'm very proud of the fact that I'm still the last French player to have won the French Open. It’s been 20 years and that’s just incredible.

Aged 10, you were pulled out from school in the sixth grade to play tennis. You became a pro at 14. Those early years must have been stressful.

Well, I wanted to be a paediatrician before getting into tennis. Even today, I love everything that has to do with health and wellness and medicine. And all my closest friends and family members call me Dr Pierce.

On your very first day at practice, you took the coach by surprise with your power!

God gave me that gift to play tennis. And that was his plan and his will for my life. From the first day that I hit a tennis ball, it was as if I had been playing for years.

Your dad sharpened your hitting skills. Chris Evert praised you for your ability to produce winners on both sides of the court.

I grew up with my dad always telling me to hit the ball as hard as I can. I made a lot of mistakes as a kid growing up, but as I continued to train, I became more and more consistent. My power game was my strength. 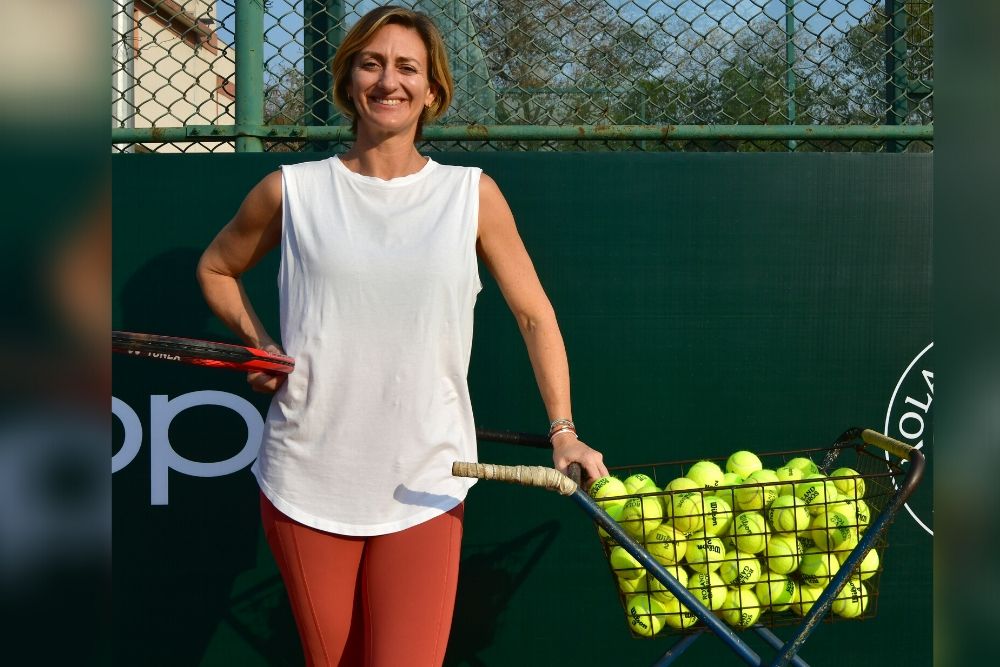 But your father became your greatest scourge. He beat and abused you often, you had to hire bodyguards, checked into hotels under assumed names and even filed restraining orders during the 1993 French Open to protect yourself.

My father was super, super hard on me. And I basically couldn't wait to be 18. And then I was like, you know, I'm out of here. That’s when I had Nick Bollettieri as my coach. He became like a second father to me. My brother David was my coach in two of my best years. When I was 18, I basically didn't want to see my dad anymore. I became fearful of him and I hated him.

But you reconciled with your dad. How did that happen?

I think it was about seven years later I was able to forgive my father. He did say sorry in 2017 before he passed away with bladder cancer. So, yes, we had special times together. I was 25 and it was in March of 2000 where I was actually in my hotel room all alone. After playing at Indian Wells, I woke up one morning and just decided that I'm just done doing my life this way and can't continue another day. And I just prayed and repented of all of my sins and gave my life to Jesus. That’s the moment where my life just totally changed. I felt such incredible peace that I had been seeking and longing for joy. And I really just felt how much the Lord loved me and how he gave his life for me. And that's when I was able to forgive my father. It was a miracle that I was able to love my dad again.

So spirituality played a big part in reviving your life. So what does religion mean to you? In today’s world, religion divides more than it unites.

I am a born-again Christian. Jesus healed my heart and took away all my pain, all my wounds like it had never happened. Religion for me is manmade. Unfortunately, religion has divided people and I don't believe in religion. I believe that there is one God. And he's created us all to love him and to serve him and to love one another and to serve one another. And that's what I believe in. For me, it's all about a relationship. It's not about a religion, it’s spiritual. And it's a choice. It's a personal choice. That's my conviction. Hatred is definitely not the plan of God.

You are not the only one with an abusive parent. Jennifer Capriati was driven to drugs by her pushy father, Stefano, Steffi Graf’s father was jailed for tax evasion and Agassi called his father Mike “violent by nature”. Why does this happen?

Not only in tennis, you have it in everything. I think it depends on the individual, because not all parents are abusive or crazy. It can be possible that parents are crazy with their children because they see it as their ticket to fame and lot of money. In a have-to-win situation, failure becomes non-negotiable and that pressure can be killing. Defeats actually make you stronger and tougher but the lure of money can be unhealthy.

At 5-foot-10, with a blonde braid flowing down your back, Mary Pierce, Jennifer Capriati, Lindsay Davenport and Conchita Martinez ushered in an era of ‘big babe’ tennis. Did size matter?

Definitely. There are advantages and disadvantages to everything about being tall or short. The taller ones aren't the fastest ones. The shorter ones are a bit faster on the court. But being taller, it helps you with your serve. By having longer arms, you've got more momentum in your swing and you have more power in your shots in general. Look at Serena Williams. She's taller than me, very strong, physically muscular and she's super powerful. So it gives you an advantage. 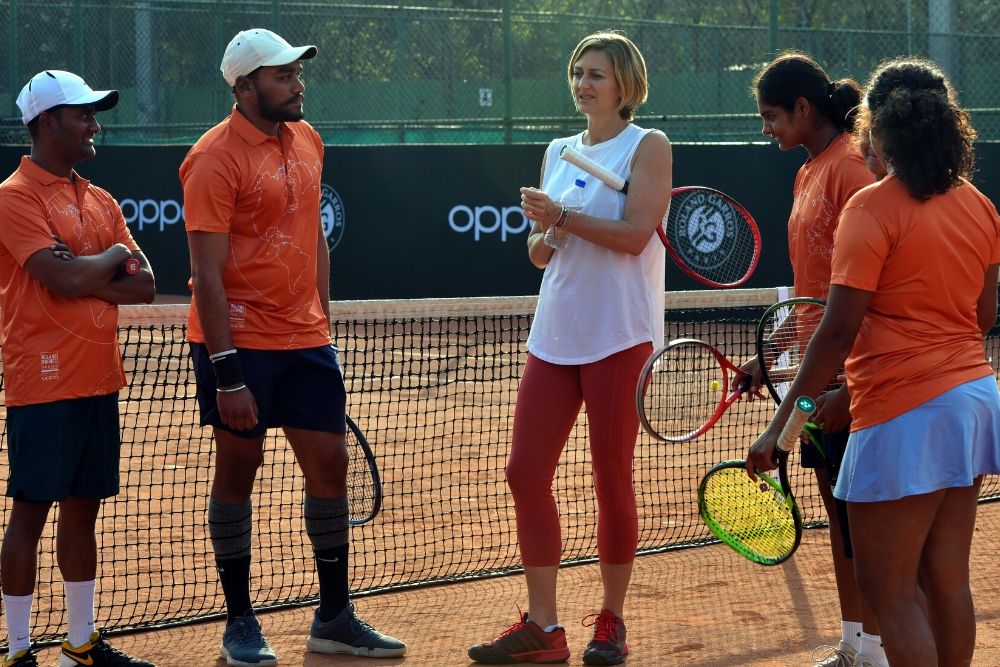 Tennis is not only about the game. Mary Pierce also had an oomph factor, a certain sexual appeal in the way you dressed and went about on court.

Well, I remember doing my first photo shoot off court when I was 16 years old. And the photographer came back and said to my dad that there's a very famous high-end fashion brand that wants Mary to be their model and do runway shows and things like that. But it's like, ‘No, my daughter is not a model. She's a tennis player.’ So obviously, I concentrated on my tennis but I did enjoy doing different photo shoots during my career.

Anna Kournikova became a famous model. Sabatini, Graf, Ana Ivanovic and you, of course, all could have had careers in fashion, could have been supermodels…

(laughs) I enjoyed working with Nike and the designers. I enjoyed the fashion side of tennis as well and designed my outfits. And I got a lot of inspiration from Ted Tingling in the dresses that he created for Tracy Austin and Chris Evert. I loved a lot of Evert’s dresses when she was playing. Evert was the player that I looked up to. She was elegant, classy and beautiful and I loved her outfits. Mentally, she was just incredible, superstrong and never said anything negative. Her game was so precise and accurate and consistent. And yeah, she's my favourite player.

Evert and Jimmy Connors – the evergreen tennis twosome. They were the quintessential lovebirds. Maybe, a movie should have been made on them!

I was too young at that time when they were playing, but yeah, a good movie.

You look extremely fit and strong. You could return to the veterans’ circuit.

I am vegan (she had idlis, white rice and bowl of soup with broccoli and beans for breakfast) and my bodyweight hasn’t changed much from my playing days. My left knee that effectively ended my career (in October 2006 in Linz) is absolutely fine now and I have been playing again for a year. I do a lot of coaching in Mauritius.

You are still single. Haven’t you thought of raising a family? May be, the mother who became the sweetest tennis coach?

Yeah, of course. I always thought that at 30 years old, I'd retire, get married and have some kids. But obviously that didn't happen because at 30, I was still playing. And yes, I had one of my greatest years. So I am still waiting, but you know what? I haven't found the man. I would love to have kids. If I couldn't have kids I would probably adopt as well. But first have to find the guy …