Hundreds of crores, collars turned up, vanishing down the lane 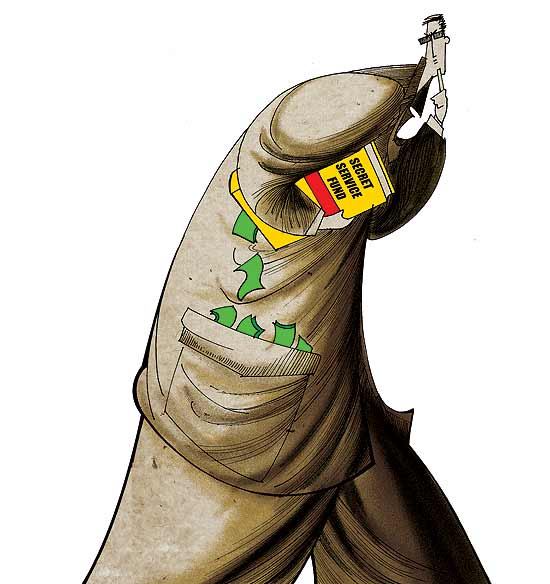 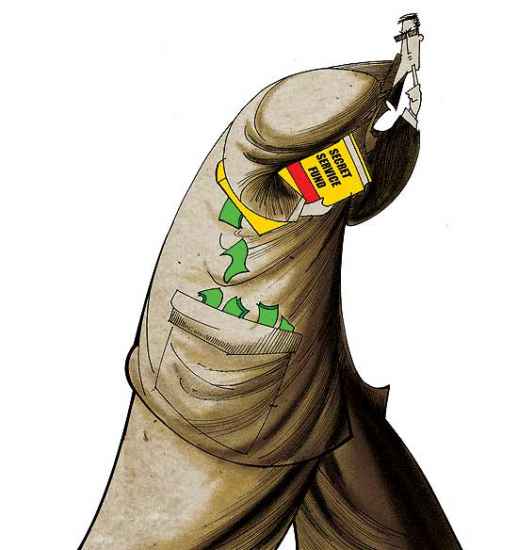 Everything around seems infected by the corruption curse, so it doesn’t come as too much of a surprise. It almost seems too good to be true—secret service funds (SSF) running into hundreds of crores, cloak-and-dagger operations, no questions asked, no audit reports required. It’s one of the many privileges our intelligence agencies are entitled to. But what happens when funds from the SSF are used for personal, and not national, interest? An ongoing RTI tussle to reveal details about one such instance from the National Technical Research Organisation (NTRO) has met with stiff resistance—all in the guise of protecting “security interests”. An embarrassed PMO, to which the NTRO reports directly, has washed its hands of the query and passed it on to the organisation, which in turn claimed last month that it was exempt from the RTI.

“Not all of these purchase powers are exercised today with total judiciousness, or even warranted by op needs.”
Rana Banerji, Former special secy, RAW

The present controversy concerns a Maruti Baleno car, purchased by a special secretary using money from the fund in 2005. According to an NTRO source, the officer and his wife allegedly kept the vehicle even after he retired in 2006 as there was no purchase record (in keeping with the way these funds are spent). Unfortunately for him, another special secretary spotted the car at the Delhi Gymkhana Club in 2007 and identified it as of the NTRO. He immediately had the car recovered. But the man who spotted the car was no better. Retiring in ’09, he took the same Baleno home! RTI queries seeking details about the car (which, predictably, have met with evasive replies so far) finally put an end to the vehicle’s misuse and it was finally returned to the NTRO.

This isn’t just a stray case involving the misuse of funds. A far more embarrassing one occurred during the NDA’s reign when A.B. Vajpayee was the PM. A former bureaucrat who was tasked with handing over Rs 15 crore of SSF money to a top Bangladeshi leader during elections there allegedly chose to keep some of it for himself. A probe wasn’t carried out because it came from the ‘secret funds’. Later, the same bureaucrat, who was tipped to take over as head of one of the intel agencies, was not promoted.

Gujarat IPS officer Sanjiv Bhatt is another one who has pointed out abuse of the SSF, details of  which he passed on to the Nanavati-Mehta commission inquiring into the Gujarat riots. His note reads: “I am privy to details regarding the exact roles of Narendra Modi, Amit Shah as well as advocates attached with certain law offices in Ahmedabad and Delhi regarding the misuse of public funds (from the SSF) amounting to Rs 10 lakh.” He claims to have witnessed money changing hands between Modi and Shah on April 11, 2002, to bribe the lawyers.

“Unfortunately, there are many people in the agencies today with little or no conscience.”
Amar Bhushan, Former special secy, RAW

Amar Bhushan, who retired as special secretary, RAW, says there is a thin line between the use and misuse of SSF. “That thin line is governed by conscience. Unfortunately, there are many people in the agencies nowadays with little or no conscience,” he says. The situation is especially worrisome because the SSF can easily go up to 25 per cent of the average budget of intelligence agencies. So, if the budget of one such agency is Rs 2,000 crore, the SSF part of it is usually around Rs 500 crore. All this money remains unaudited, only an annual certificate of full use has to be given by the organisational head.

Rana Banerji, ex-RAW special secretary and now member of the taskforce on national security,  in a report written for the Institute for Defence Studies and Analyses (IDSA), had this to say about the SSF: “Several disreputable financial practices have thrived under the grab of operational secrecy, including purchase of capital equipment like cars in violation of standard prescribed norms of the government or the indiscriminate hiring of safehouses which more often than not are properties belonging almost exclusively to in-house employees at different levels of seniority. It has often been revealed that a common misuse of SSF includes renting out of safehouses—that are paid for under SSF—at exorbitant rates.”

“I want experts to look into my proposal for a Intelligence Services bill 2011 and give it final shape.”
Manish Tiwari, Union I&B minister

The issue is something even India’s lawmakers are grappling with as demands grow to make the intelligence agencies accountable in some way. Congress MP and now minister for I&B Manish Tiwari had introduced a private member’s bill, ‘The Intelligence Services (Powers and Regulation) Bill, 2011’, in the Lok Sabha in which he had brought up SSF misuse as a major concern. The bill is still pending but Tiwari is non-committal about its passage. “As a legislator, one tries to initiate many projects but as an executive there are many other responsibilities too. The issues are important but experts will have a better understanding of the same. I want the experts to look into it and give it final shape,” the minister says.

Very rarely has the abuse of SSF been scrutinised. One rare instance came from Jharkhand in 2009 where, on the orders of the then governor Syed Sibtey Razi, the state government sought replies from DGP V.D. Ram and additional DGP (Special Branch) Rajiv Kumar about the non-submission of utilisation certificates of SSF. As per the accountant general’s records, no certificates were provided for two withdrawals. Of these, DGP Ram had withdrawn Rs 5.60 crore in cash and ADGP Rajiv Kumar Rs 2.50 crore, both in the same year 2006.

“if the funds were taken out, then reimbursed, it’s perfectly legal. But there must be some record to suggest it was done.”

In another incident, the Bombay High Court directed the Maharashtra state to produce records of the SSF of its crime investigation department in 2006 when former IPS officer Jayant Umranikar headed it. A division bench comprising Justice B.H. Marlapalle and Justice U.D. Salvi was hearing a PIL filed in August 2009 by the Citizens’ Organisation for Public Opinion, alleging funds misappropriation by Umranikar, a former Pune police commissioner. The petition stated that in 2006 Umranikar withdrew money from the SSF to book air tickets for himself, his wife and daughter from Pune to Delhi and back. “If the funds were taken out and then reimbursed, it is perfectly legal. But there must be some record to suggest it was really done,” said Justice Marlapalle.

Former RAW man Rana Banerji adds in his report that usage of SSF in the past was “tempered by higher standards of personal probity. But today not all of these hire or purchase powers are exercised with total judiciousness or are even warranted by strict operational needs.... Another recent practice has been to routinely engage retired employees even in non-specialised categories and keep them employed indefinitely on hefty salaries paid from the secret service fund, totally bypassing the laid down government rules and regulations”. Personal probity, that seems to be the key phrase missing in today’s intel services.

‘We Won’t Reconsider Support Even If The CM Is Replaced’