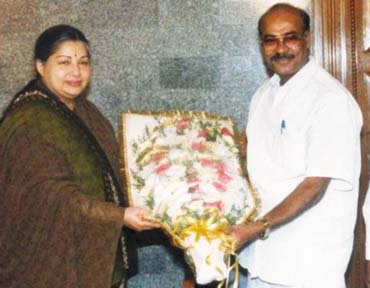 outlookindia.com
-0001-11-30T00:00:00+0553
When Pattali Makkal Katchi (PMK) founder S. Ramdoss met the aiadmk general secretary on February 6, it signalled the dawn of a new political culture in Tamil Nadu. Although every election has witnessed realignments of political parties in its wake, the decision of the PMK has unnerved both its friends and its rivals at one go. The PMKis a casteist party, representing the Vanniyars of northern Tamil Nadu. It has a narrow parochial worldview and subscribes to an extreme form of Tamil nationalism and it is exclusive in its character. Also, the PMK chooses its partners not on ideology but by looking at which formation gives it more seats. By dumping the nda, the pmk has exposed the chinks in the armours of both the nda as well as the secular front.

What made Ramdoss take this decision? The PMK leader holds dmk president M. Karunanidhi responsible for his quitting the nda. "If Karunanidhi desired, he could have put the Tamizha Rajiv Congress (trc) and its president Vazhapadi K. Ramamurthy in place. But he enjoyed all the slander and the accusations made by Vazhapadi against me," he says. Ramdoss lists out innumerable instances of being slighted by the dmk chief. The government's decision to detain 21 pmk men under the National Security Act and six under the Goonda Act is seen as a deliberate attempt to marginalise the pmk in order to woo the Dalits. But the dmk chief denies all these charges. Says Karunanidhi: "Ramdoss' decision to join the aiadmk alliance was a predetermined one. Instead of attacking me, it would be better if he accepts that others in the nda were not willing to play ball with him in his game to bring the aiadmk into the nda fold."

In the last six months, the pmk has been demanding two things—the expulsion of the trc from the nda and chief ministership for the party in Pondicherry. trc president Vazhapadi has been accusing Ramdoss of amassing crores of rupees through his central ministers. "Ramdoss' son Dr Anubumani is functioning as the de facto minister in two ministries that are with the pmk—petroleum and mines. His role in the functioning of the Neyveli Lignite Corporation came to such a stage the pmo had to intervene to save the psu," claims Vazhapadi.

dmk leaders, on their part, say the growth of the pmk is divisive in many ways. "They want Vanniyar rule, whereas we want good governance which is inclusive of all the sections of society," says one dmk man. "More than the threat of the majoritarionism of the Sangh parivar, the threat from such narrow caste-based exclusivism is higher and has more potency."

The aiadmk camp, meanwhile, is jubilant over the pmk's joining hands with it. Says a prominent aiadmk leader who was involved in wooing the pmk: "Mamata (Banerjee) of Trinamul Congress just talks about a maha-alliance, whereas Amma (Jayalalitha) has managed to establish one in Tamil Nadu. We work with a single-point agenda—to defeat the dmk-led front at any cost. It's a life-or-death situation for us."

But bringing the pmk to the secular front is easier said than done. The Congress is in power in Pondicherry and the Tamil Nadu unit of the Congress has been demanding a ban on the pmk for the last seven months. "The pmk is a threat to the integrity and sovereignty of India and it is openly supporting the illegal activities of the ltte. It nurtures separatists groups like the tnla and tnrt which have joined hands with the sandalwood smuggler Veerappan. Hence, the party has to be banned," says a memorandum prepared by the state unit and forwarded to aicc president Sonia Gandhi.Says tncc president E.V.K.S. Elangovan: "When the senior aicc leader Pranab Mukherjee met the aiadmk leader Jayalalitha to work out an electoral arrangement, there was no hint of the pmk joining the front."

According to Malini Parthasarathy, executive editor, The Hindu, the pmk's decision has posed a sharp moral challenge to the Congress' prospective alliance with the aiadmk. Says she: "The political landscape in Tamil Nadu was radically altered by the Congress' emphatic stance since 1997 that it would have no truck with the dmk because of its alleged encouragement of the ltte. This virtually drove the dmk, which till then had a categorically secular political record, into the arms of the waiting bjp. So, if the Congress is to now countenance the entry of the pmk—with its high-decibel support of the ltte and its leader Prabhakaran—into a prospective alliance, that party will have to explain to the country why it went to such lengths to withdraw support to the Gujral government in November 1997 and to force a reconfiguration of political forces which ultimately led to the crowning of the nda at the Centre."

As far as the tmc is concerned, it would certainly lose its importance in the aiadmk-led front as the second largest party. Though the dmk has extended an open invitation, the party is finding it difficult to be on the side of the bjp. "It's a moral dilemma. And the choices before us are not easy. Only after weighing all the factors will we take a decision," says senior tmc leader S.R. Balasubramaniam.

As for Karunanidhi, his hopes now rest in roping in the tmc. But the million-vote question is, will Moopanar oblige?

Between Will and Won't