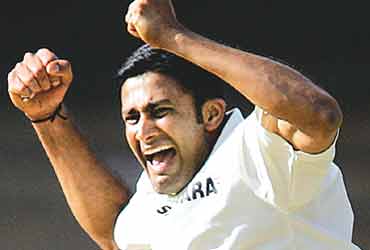 outlookindia.com
-0001-11-30T00:00:00+0553
Bangalore was once again a happy hunting ground for us as we went 1-0 ahead in the four-Test TVS Cup series. I watched a fair bit of the game on television and it felt very different and quite disappointing to be so many miles away. However, I spoke to most of the guys while they were celebrating after the game in the changing rooms. It was also great to hear them sing the team song—our traditional way of celebrating a win—over the telephone, but I would much rather have been there. 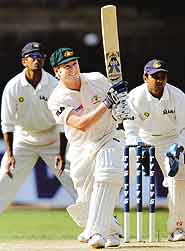 Tosses are important in India because the wicket is generally at its best for batting on the first day, after which deterioration sets in rapidly. One would not want to be chasing a mammoth target while staring at large dusty cracks on the surface, so it is good that Gilly got lucky with the toss at Chennai as well— though, I grant, the luck seemed to evaporate all too fast in that humid Chepauk haze on the first day. Bangalore, howe-ver, stays in our bag. Michael Clarke and Gilly did the job for us there, and the former was a revelation even for his staunch supporters back home. When I got injured in England and was asked who would be the most suitable replacement, I had mentioned Clarke. He is one of the most exciting youngsters in the game, and he showed plenty of patience and maturity while playing that match-winning Bangalore knock. I had seen him face the spinners with great confidence in the TVS Cup triseries last year, and he looked even better while taking on the wily Muralitharan in Sri Lanka. His classic Test match approach was wonderfully contrasted by Adam Gilchrist, who scored a great century in no time at all.

Before the series began and even during the first Test, we heard players and commentators mention our performance in Sri Lanka, and the way it prepared us for this series. Maybe a brief rewind is in order. I remember that we were shot out for a very low score in the first innings of that series. When we examined our performance, we realised our attacking game with the calculated risks it involved was not going to take us too far on those wickets. We learnt to respect the conditions and made the changes that were required to master them. It was important to minimise risks and be ready to bat for long periods of time. Patience was the key to winning, and we realised there was no need to try and finish a game within three-four days when we were entitled to five.

The patience mantra was not for the batsmen only, and I think the bowlers too learnt a great deal in Sri Lanka. Michael Kasprowicz has always done well in the subcontinent, and along with Jason Gillespie, he gained valuable experience of bowling in conditions that normally suit spinners. We did not have Glenn for that series, but with him at the head of the attack, the discipline and aggression is really impressive. I liked the way all three of them attacked the stumps relentlessly in Bangalore, and this line provided them with quite a few lbw dismissals.

Cut to Chennai. We had a 1-0 lead in 2001 as well. Question is, can there be a repeat of the reversal that took place then? Unlikely. I think we have a better understanding of the conditions now. We have learnt from our mistakes so you may not see too many follow-ons. We are confident about what works for us and will not try to do anything different from what we did at Bangalore. Despite our bad first day, I tend to think that we will be able to put India under pressure because of the way our bowlers performed in Bangalore. The Indian batsmen were off-colour in the one-day tournaments that started their season, and they seem to have carried that ordinary form into the Tests. The opening combination that did well in Australia—Virender Sehwag and Akash Chopra—has closed shop. The middle-order was also not at its best, but that was bound to be the case once we put them under pressure by scoring 474. What would hurt the Indians most is the fact that quite a few of their batsmen got off to starts in the first innings, but no one was able to make it count.

The record books will show that Harbhajan Singh was the most successful bowler in Bangalore, but it is clear that his hold over our batsmen is nowhere near as mesmerising as it was in 2001. True, he took 11 wickets in the game, but then he also bowled a huge number of overs. We certainly won't mind him taking a huge number of wickets if we are able to score nearly 800 runs in every game.

The only area of slight concern was the way our top-order lost wickets in lots in both the innings. It's something we guard against, and hopefully, we will continue to see some big contributions from the openers from now on. Hayden and Langer got back close to peak form at Chepauk, but sadly we forfeited the advantage.

It will be interesting to see whether Sachin Tendulkar will play in the Tests. Quite understandably, I would like to see him out of the equation for as long as possible. I know that this Indian team has won quite a few games without a huge contribution from Tendulkar, but as an opponent, I feel they look more confident when he is part of the team. The Indians like having him on the field and he is particularly crucial for us since he has a very good record versus Australia. The temptation to play Tendulkar, even if he is 80 to 90 per cent fit, can be really hard to resist. However, there are quite a few games left in this season for India, with South Africa going to India after us. The team management will have to take a call on whether it will be safe to bring him back before he is ready, because haste in this matter is rarely advisable.

I think Shane Warne will have a significant role to play in Chennai. The wicket in Bangalore was slower, which is why it helped finger spinners more than wrist spinners. The surface in Chennai is much harder and that would suit Shane a lot more. He has played in Chennai a couple of times and did pretty decently in the 1998 Test. I spoke to Shane after the Bangalore game, and he was happy with the way he bowled. He is quite calm and relaxed for a bloke who is just two wickets away from a world record.

The doctors will check my hand in a couple of days and if I get the go-ahead, I will be in Chennai on Sunday. I don't feel any pain, so I hope all goes well over the next couple of days.

The first session, the first day and the first Test—we won all those contests, and now all we have to do is make good on that momentum.