Sania-Shoaib try to regain the grace they lost in Pakistan. Still, a spurned public sulks. 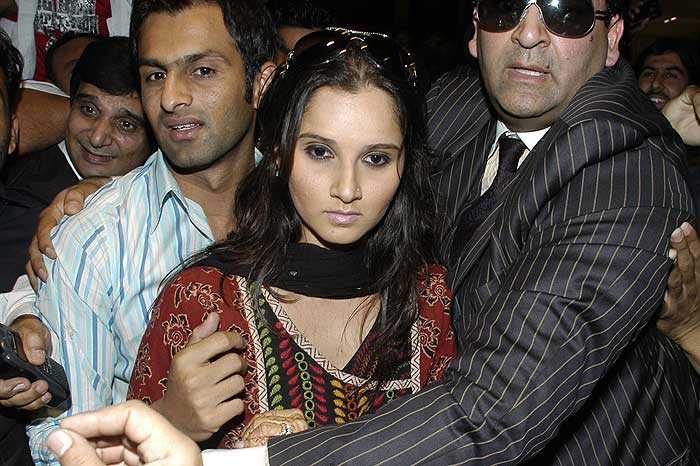 At last, on April 27, Sania and Shoaib did what most celebrity-hungry Pakistanis craved after ever since they landed in Karachi five days earlier—they turned around, waved and flashed a smile at the gaggle of cameramen assembled outside the Crystal Hall of the plush Pearl Continental Hotel. Behold them thus: she in a sea-green outfit, he in a black suit; she a tennis star steadily rapelling down the rankings, and he a Test cricketer still banned from playing for Pakistan. But for those fleeting moments, such mundane details were swept aside as the cameras whirred with fury and transmitted those pictures live to a nation eagerly waiting for a glimpse of their glamorous bhabi/bahu, the Indian whom the Pakistani cricketer had wooed and won over, much against the wishes of her jealous, often jingoistic countrymen.

But Sania and Shoaib’s smile came five days too late—it didn’t melt a million hearts or become a salve to the hurt of a people, or even put to rest the swirl of controversies the couple had raised wherever they went. For weeks, Pakistanis had rallied behind their Shoaib—from the prime minister, sundry associations and celebrities down to the man on the street, they had all supported him as he faced a hostile Indian media before his nikah to Sania in India. Was this then the way for Shoania (the media’s moniker for the couple) to repay their debts?

At the Sialkot hockey stadium reception, utter chaos broke out. The nation saw an angry Sania on TV.

Sania wanted privacy, to keep away from the prying media through which the nation hoped to participate in a celebration that just about every Pakistani, unconsciously, had appropriated as his own. Their private existence had been dragged into the public realm, and the couple was popularly perceived to have acceded to this appropriation quite willingly in India. Why should they demur in Pakistan? But Sania remained aloof, and was called a snob; Shoaib succumbed to her whim and was dubbed hen-pecked. Student Bushra Munir’s response was typical, “Under siege in India, Shoaib was cool as ice. What happened to that civility in Pakistan, where the media is following him only out of the heroism the public has attached to him lately?”

Their very first step in Lahore was a bit of a public relations disaster, as a large crowd turned out to greet them. The heaving masses, drunk on nationalism and the excitement of celebrity-spotting, was greeted sullenly by a nonplussed Sania. In the ensuing crush, she tripped over and nearly fell. But radio jockey Hasan Gul was unforgiving over the FM channel: “So she stumbled at the Lahore airport, so she was about to fall, so her husband didn’t let her, so what? Doesn’t mean they can just trash their fans by ignoring them.” 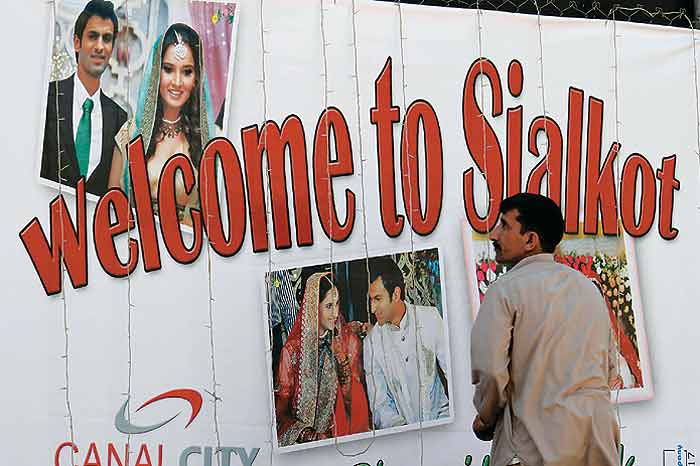 ‘Shoania’ consciously retreated from the public gaze, disallowing the TV cameras to get a peep into their lives. Disappointment segued into resentment. Dr Aslam Khan, a child specialist, said, “Ever since Shoaib’s return to Pakistan, all that he talks about now is how important his ‘privacy’ is? What could a wave of the hand or a thanks have cost them?”

From Lahore, Sania and Shoaib winged their way to his hometown Sialkot, a town whose rich don’t necessarily dither from ostentation. The couple didn’t make public appearances there either, a cruel cut for young men like Gulu Badshah, who says he was one of the many Pakistanis who posted words of encouragement for Shoaib on Facebook 20 times a day during his travails in India. “And all we get in return is snobbish arrogance,” he complains.

The reception, or walima, was organised at the Sialkot Hockey Stadium. Roads to the stadium were blocked, resulting in a traffic snarl. Inside, there was utter chaos. Says lawyer Raja Amir, who attended the reception, “The stage was initially hijacked by mediapersons, who had to be shoved down when the couple arrived. Guests could hardly take a peek at the couple curtained behind a sea of people.” A tense, angry Sania was what the nation saw on TV. She was to later comment, rather acidly, “Imagine you are watching utter chaos at your reception stage where people are creating a scene of utter disgrace, would you still be able to notice a camera zooming into your face crying out for a smile? Plus, I believe, if I keep smiling all the time, I would actually look silly.”

The problem was that Sania wasn’t seen smiling even once. It stoked controversies—some real, others imagined. For one, it was said a clutch of businessmen had financed the Sialkot reception and Shoaib hadn’t spent a penny. (Some even boasted about this on TV, a fact not incredible, as Sialkot has a tradition of the rich patronising emerging sportsmen through their life.) Then there were allegations that the reception violated the Marriage Functions (Prohibition of Ostentatious Displays and Wasteful Expenses) Ordinance 2000, which prescribes that besides pulao, only one dish can be served. Shoaib’s family denied the charge, saying they had served only chicken korma, and the lavish spread was reserved for only the two families.

Shoaib’s family was accused of flouting the recent measures undertaken to save power, lighting up the stadium with hundreds of bulbs. The family said these were powered by hired generators, but city authorities claimed they had had to snap electricity connections taken surreptitiously. Another gentleman filed a petition in court accusing Shoaib of selling his wedding card for Rs 15,000, a patently false charge the disappointed invoked to deride the couple.

Ultimately, what prompted the couple to rethink their public conduct was the news accusing the couple of demanding Rs 3.5 crore for giving exclusive TV rights to their reception. Buffeted by the hostile media and perhaps fathoming the meaning their wedding had for the Pakistanis, the couple decided to serve afresh—they gave two TV interviews, laughing away the accusations hurled at them. Chastened, on the evening of April 27, before their (second) reception in Lahore, they smiled and waved at the media before walking into the hall where guests awaited them.

Still, there persists an unjustified feeling of foreboding about Shoaib’s future among many who point to one of his comments: “I’m acting more like a bodyguard than a husband.” It was a reference to the huge male following Sania has in Pakistan. “He should have known this earlier,” retorts Tariq Chaudhry, a maths professor. “Sania isn’t an ordinary girl. Apart from tennis, she has the tag of being the ‘sexiest sports girl of South Asia’. This is something Shoaib will have to live with for the rest of his life—his wife will always be more popular than him.” In fact, her confident and assertive style has people lamenting—Shoaib is doomed to play second-fiddle. In a subcontinent still under the thrall of male chauvinism, this is reason enough not to warm up to the Indian bahu/bhabi.